One week in Reefton… fishing? 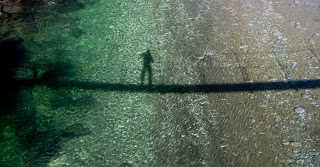 Ex post the days in Reefton could be described in brief, I have to try hard to get it right. First day fishing a river very close by with some 4WD access. By 6th sense I stopped just a kilometer before a real awkward part of the track, parked the car, fished up, saw just a couple of fish and landed two. One of them needed some surgery as it had an old fly in its mouth. I release the fish with two flies less. For the stretch fished the fish number was low. Nice river tough. Next time: further up 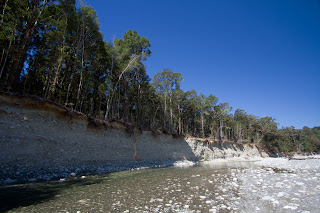 Next day: Larry’s Creek – I mention that here as anybody traveling NZ will come over that river. This one got two massive landslides in the last two years in the upper part that got washed in thoroughly by the January floods. Now it was running low as a small creek. Larry’s is said to still produce but is pretty much dug over. It might need some years to develop structure again. I fished the lowest 5km with only one lost fish to the fly. Several good sized sawn but in total only a dozen (not much for the stretch and the perfect visibility on this at that time tiny creek…). Remarkable: a massive clear cut on the true left bank (they do the same shit as in BC and Vancouver Island here…) and some gold drenching just meters from the river on the true right side 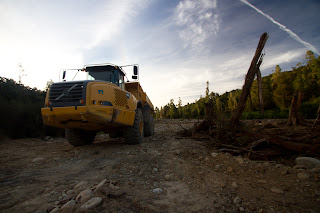 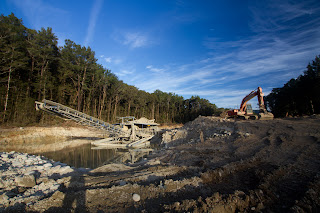 Third day (Friday) there was the idea to fish a smaller creek close by. Arriving on the turn to the access I had a look under the car. I had a bad feeling as I discovered some oil spill from the rear diff (differential gear box) the day before and the funny noise around 100km/h was now pretty much between 90 and 120km/h and even louder than before. Looking under the car I saw oil dripping out of the diff’s housing and it was warm to the touch. It was Friday around noon (most of the fishing days in the last weeks did not start before noon) and with sad feelings I immediately turned around to drive back to Reefton to get the car to the service station as soon as possible. It later turned out that it was not just the rear diff piston sealing – this has gone long before we got the car – but the whole rear diff (differential) was done. The seal must have been defect month ago, allowing dirt to come in the bearing, destroying the bearing and thus the whole unit. From the very first meters with this car middle of January it had some wired noise going around 100km/h (that is why I got the speeding ticket to avoid that noise), a clear indication that this problem already existed as we got the car. Why this was not discovered and taken care of? I do not know. To make a long story short: at the car service they were very friendly, but did not order the right part right away, they babbled something of work on Saturday to take care of, but they did not, we did not get and exchange car from Christchurch, they did not order the right part before Monday, but – I would have bet 1.000NZ$ on that – received the wrong diff on Tuesday, so ordering the really right part on Tuesday to get it on Wednesday. Luckily it arrived very early on Wednesday and we were mobile again around noon. I was really pissed. Next time: might buy my own car and then I know whom to blame. Three facts made this whole procedure acceptable (I might otherwise have immediately bought another car): we had a perfect cottage, everything was in walking distance and the weather was rainy and wet for some of the waiting days. 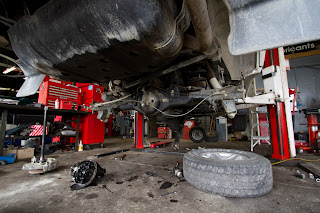 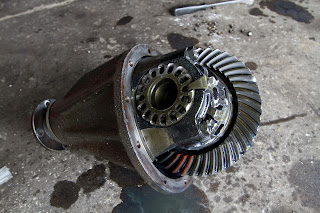 In these days Ines and Tobias went for various walks around Reefton, went to the 30m swimming pool pretty much every day, where invited to the baby group, asked if they relocated to Reefton and enjoyed the nice cottage. Renting a mountain bike was not an option as the bike the friendly lady from the ‘Reefton Sports Shop’ (Fishing, bikes, guns) had for rent was more like the bike I would like to avoid to go to the train station. I did some blogging, fly tying, picture and video editing. We did some cooking and drinking, groceries, buying and eating cake. And finally we watched the movie ‘Only the river knows’ about the soul of some fictional or real past and present trout bums. A real enjoyable and very well done fly fishing movie. Not fish porn but better.

And in Reefton I slowly discovered that I do not stand the plunger coffee... 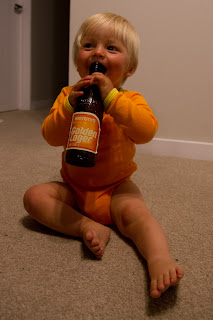 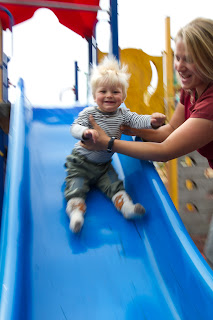 On Saturday, asking the owners of the cottage, if they might have an idea where to get a car, they offered me their own second car. Wow! Can you belief that to happen in good old G. where the car is the most sacred possession? Thanks to that generosity I was able to head towards a river in a nearby valley where I started to fish the more remote stretch of water a little bit away from the street. Right from the start I could entice some fish and the idea to walk in first for some kilometers did not materialize. The river was very low and still it was not a small stream, don’t want to imagine to ford the gorge with higher water. Caught a couple of fish and lost some. All around 4 to 5 lbs. Part of the way back was via a track that was more re-naturalized than indicated on the map: the last time there it was used by a vehicle was some 30 years ago. 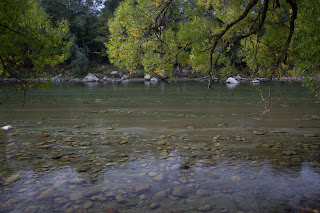 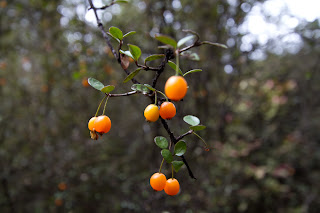 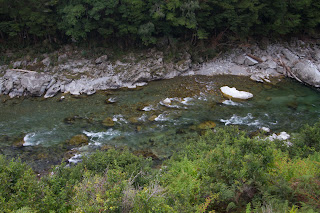 Sunday was announced to be wet. Being not mobile I was pretty much Reefton-bound. Writing, Tying, … Ines went for the pool, shopping some cake for the coffee. The rain did not make its way all the way to Reefton. It might have been this night. The cottage was right opposite of the local fire department. We were warned by the cottage owner that the alarm might be very loud. This night the alarm went off and it was very very loud! It took just seconds till the first fire fighters did arrive to get the truck ready and head off to the place where they would be needed.

Finally on Monday they disassembled the car and ordered the part. And in the afternoon the drizzle developed to a real rain shower. Within minutes we had a pond, even a small lake before our cottage. Even wading it half naked I could not spot any trout in.

In the supermarket I found a red on sale for and unbelievable low price: Longride – Hawke’s Bay – Merlot, CabSauv – 2011. This tasted fine, for the price very fine. The typical Parker style wine (rich, full bodied, good to drink, dark red, vanilla kind of). On the back there was one sentence that explained it all “…fruit tones and gentle oak handling has added complexity…”- wtf is ‘oak handling’ – it can only mean sever use of oak chips. Why did they not mention the use of SCC, chocolate and fruit aromas and some other gimmicks? Never mind, the next day I bought three more bottles.

Tuesday… Lucky that we had this cottage and not a wet tent in the middle of nowhere.

Wednesday around breakfast time our car drove by our cottage! They were doing a test run. Unbelievable! I picked it up, paid the bill, loaded the trunk and went off to fish again. A river with a somewhat exposed but ok access to its lower part. I just briefly described the access to Ines so she knew where I am about. It was a river that we choppered two years ago to its middle reaches with mixed results. This time I pretty much immediately started to spot fish. I missed and spooked some in long runs and in obvious water, very well camouflaged fish, they blended well with the color of stones and water and I was walking to fast and not expecting fish in these places... but I got some good (I at least thought so, not the fish) shots on some fish. I hooked a nice one of 7lbs and landed it. Just one. 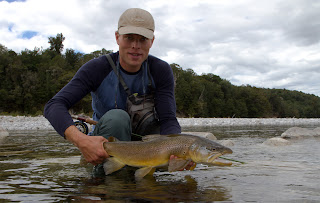 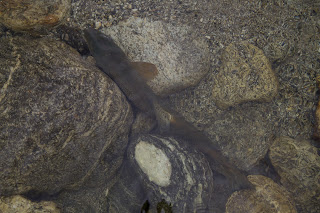 Heading upriver to the next and the next pool, driven by trout, hunted by fresh, mystic water, pools and runs. Into the bush leaving the pastoral land behind me. The fish where there but not willing to take my offerings (or might be I was not fishing focused enough). I had to return. It was six pm, rushing out of the bush, scrambling over the rocks, rushing down the paddocks, crossing over, finding the exit, climbing up the steep bank-cliff in the woods, back to the car, 4WD track out and rushed back to Reefton. I arrived there close to eight – with Ines in deep worries as I was later than defined, already close to dark and she remembered some bits of information about the exposed access. So sorry! I just tried to catch another fish… ; ) This river is definitely worth some effort. To be continued on the next trip. 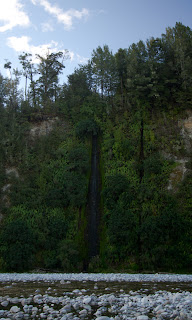 Oh and by the way: the car – it was silent! No more vibration around 100km/h! This will be hard for Tobias to fall asleep. 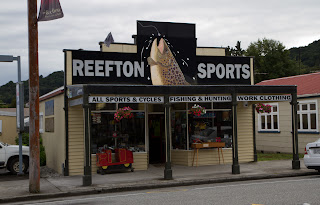 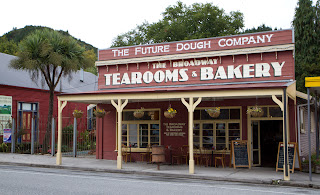 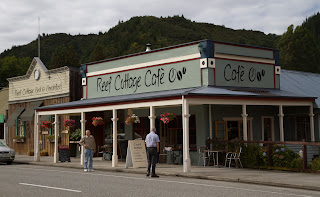 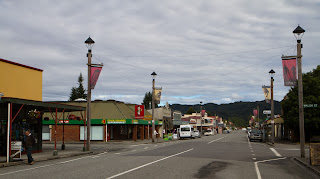