Third day we were assigned to Paulo the head guide of the team. All of us headed up the main river Rio Marié as Untamed Amazon would follow us during the day. What did we do? Fishing! Casting, casting, casting, … 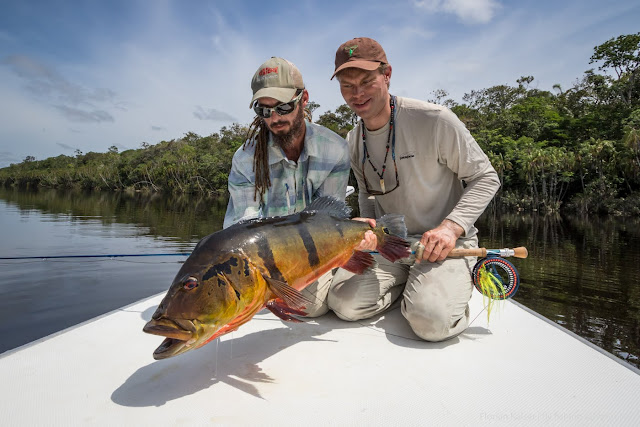 To shorten the day a little: Once of a sudden close to noon I had a strong pull on my line. I was always wondering how it would be to be connected to one of those realt big GPBs. I was expecting not to be able to stop such a +20lbs Asu/ GPB as the much smaller Butterfly Bass were so strong. Now I was attached to a good fish on my line (a 300 grain sink tip), it was strong but far from unstoppable, it was not such a freight train I would have expected.

On 60lbs tippet and a 9# rod you can pretty much hold the fish on a short line and it might do several darts but a long run in to your backing is not the norm. After a few hard but kind of short pulls that fish was safely landed. Compared to the normal behavior of a fish of that size I must have caught it in its siesta.

Weighting on IGFA approved scales showed 23lbs and 84cm. Yahoo! I was in the +20lbs Giant Peacock Bass Club, the community most of the serious GPB-fishermen seek to be part of. Did it make a difference? At that very moment yes. To illustrate the quality of Marié and the chance to catch a +20lba GPB: this very day two other GPBs beyond that magical mark were caught. The largest was 24lbs. 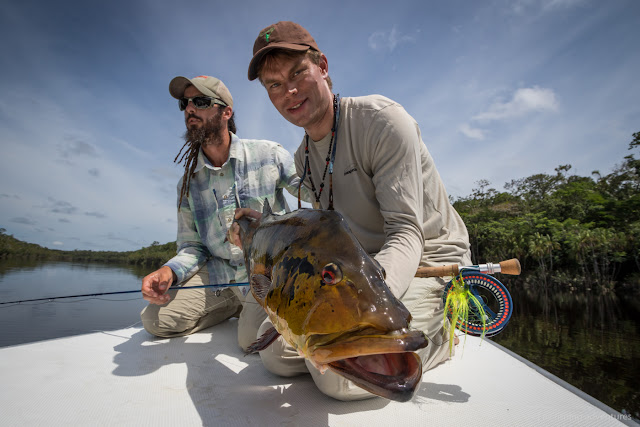 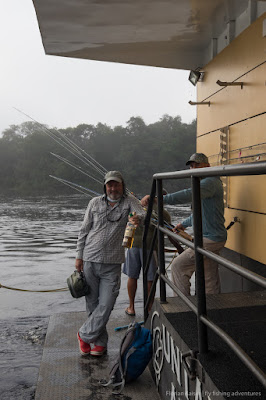 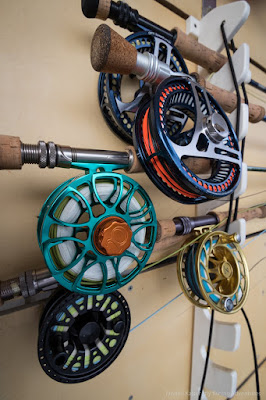 What kind of flies did we use? Barbless, strictly barbless, as only barbless fish count and as barbless is the way to treat the fish in the best possible way. Assuming that you are a good fisherman, the likelihood to lose a decent fish due to barbless is very low.

Again, what kind of flies did we use? Pretty much anything that can be tied. Mostly we fished deceiver stile flies with sinking line (WF-8/9 300-350 Grain due to the rather high water, later in the season intermediate tip might be the appropriate) in yellow, green, orange and even white/blue. Some flash is good. Not much action on surface flies as water level was rather high in our last week of September 2016. I tied a lot of flies and some big poppers before the trip and only used them very little. Later in the season popper and poledancer are said to be the way to go. We lost very few flies, less than three to five per week. As long as your line, connection and leader are 100% good there is only the chance to lose a fly to one of the odd Piranhas or on a snack that cannot be retrieved. In case you need some, the lodge has some flies as backup to buy. 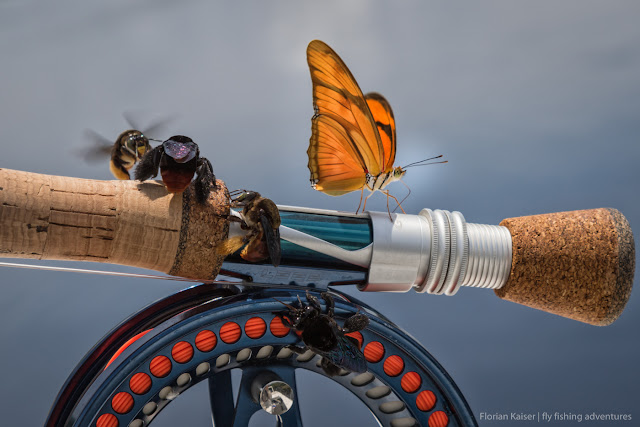 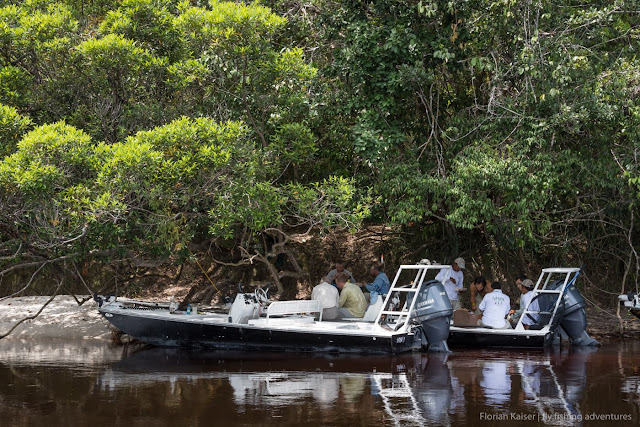 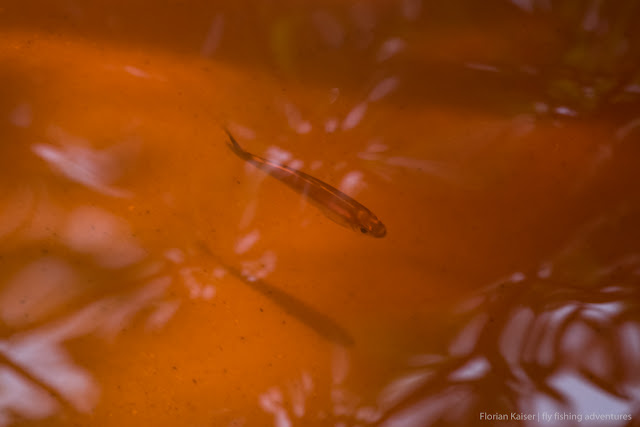 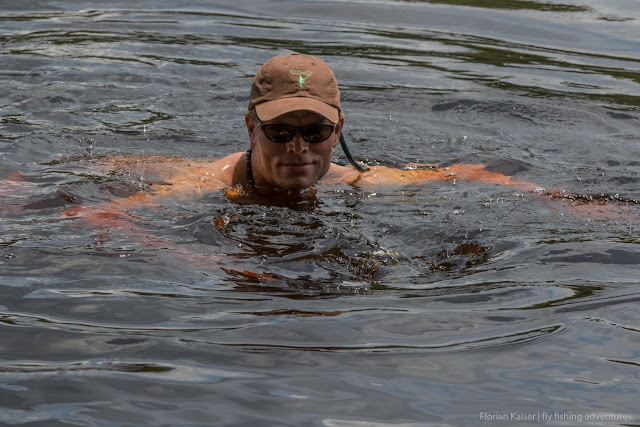 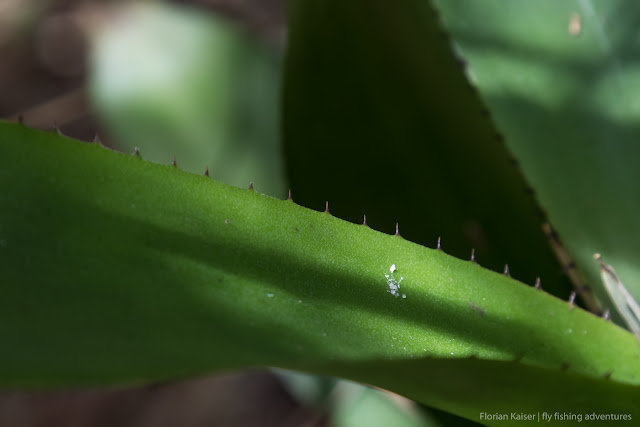 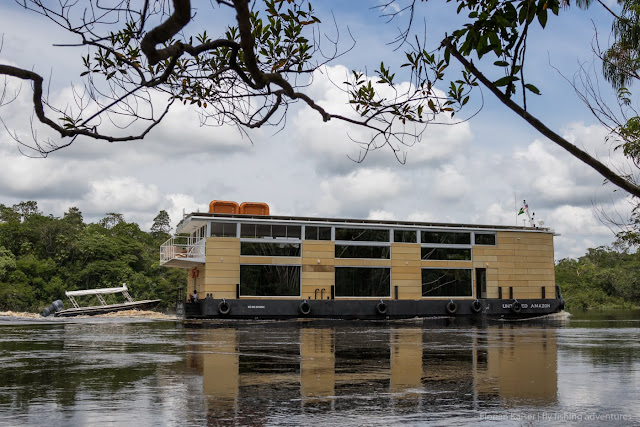 Besides the once in a while Giant Peacock Bass - that was introduced to us by Paulo on the first evening with this comment “you will have zero to two chances a day to catch a Giant Peacock Bass” (he was right with that) – you and your fishing partner in the boat might catch anything between zero and fifty Butterfly Bass during a day. These fish in the range of 2-7 lbs fight the best pound by pound of all the fish in the river. They will keep you motivated and make your fingers wet once in a while. If your fishing buddy catches one of these, cast close to that spot as you might catch another Butterfly or even a GPB, as they tend to follow the action. Besides fighting well the Butterflies look really awesome. Nice colors!

Weather during the day was slightly different every day. Sometimes we got just a short spell, sometimes a thunderstorm in the afternoon, some days just heat and melting in the sun. It is obvious to cover your skin by appropriate clothes and to use sun blocker for face, hands and in case you fish barefoot (which is the best way) a heavy layer of sunscreen on your feet. Stripping guards (take one backup!) or gloves are mandatory! The constant stripping and the fight will cut and shred your fingers in no time. 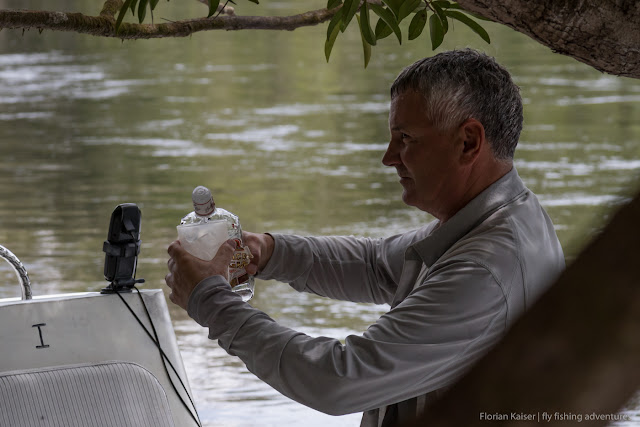 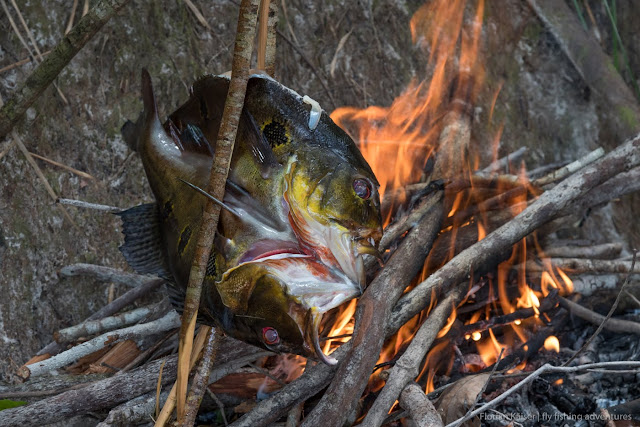 In case you handle limes for alcoholic drinks (better stay to lots of water and soft drinks!) or the once in a while fish barbecue, take very good care not to spill any lime juice drops on your skin and clean possible areas after lunch thoroughly with water. Otherwise you will experience what lime juice and sun can do: it will just burn your skin to stage 2 or even 3 injuries!