In case you consider booking your slot at Rio Marié, do not expect to catch record fish, do not take it for granted. Still, Rio Marié is without any doubt the very best place with the highest chance on this planet to catch a +20lbs Giant Peacock Bass. Word.

So if you are a decent and seasoned fisherman (that means casting 18-20 meters more or less a whole day and knowing what to do), you might have a relatively high chance to catch a +20lbs GPB – but no guarantee! Do not complain about “not enough big fish”. Fishing is special and might be kind of boring at times, but if you are in GPB-fly fishing and want to catch a big one or if you want to fish in one of the last virgin spots, Rio Marié is the very best place to go! 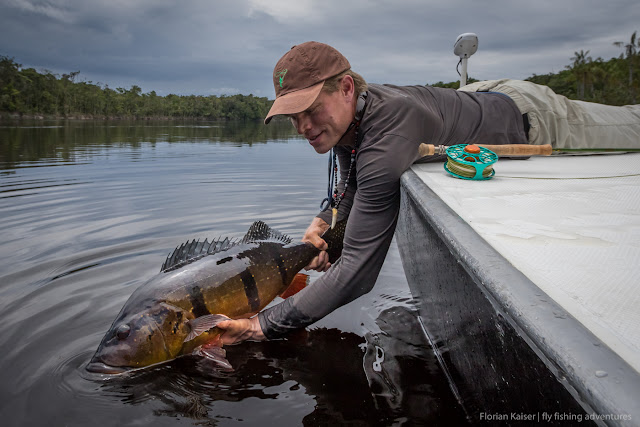 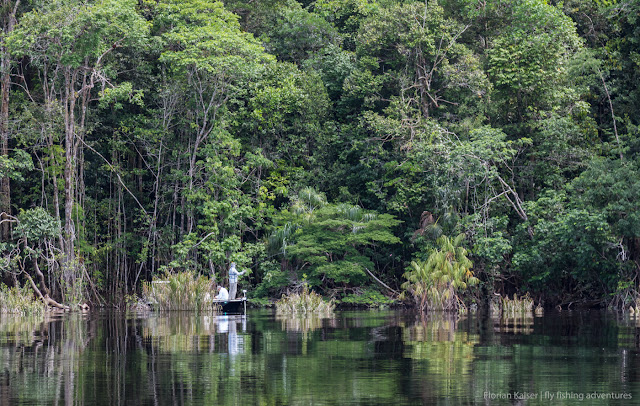 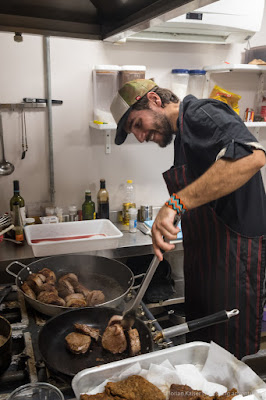 It was that night that Untamed Amazon would be relocated and moved further upstream after we finished fishing around 5 pm that day. All boats were daisy chained behind the big boat and we started the engines to continue our way upriver. We had appetizers and eventually dinner on a moving ship right in the middle of the jungle. That feeling alone was just awesome! In the meantime it got dark and eventually pitch black outside and we were going up a river that became tighter and smaller mile by mile.

Orleans the Boat Principal aka Captain and its copilots or so called deck hands navigated the vessel upstream. Remember it was pitch black night. They once in a while pointed out the shore with a very bright beam of a big spotlight to check their location. I followed our route with my iPhone and Google Maps and was totally fascinated, taking several long exposure shots with my tripod from our balcony right at the bow of the ship of that scenery: a moving ship with the light beam wandering around. Later Breno and I went to the bridge of the ship. In the beginning an assistant and later on Orleans himself maneuvered the big vessel upstream through the darkness. It took several minutes before Breno and I could see anything on the pitch black bridge looking outside. 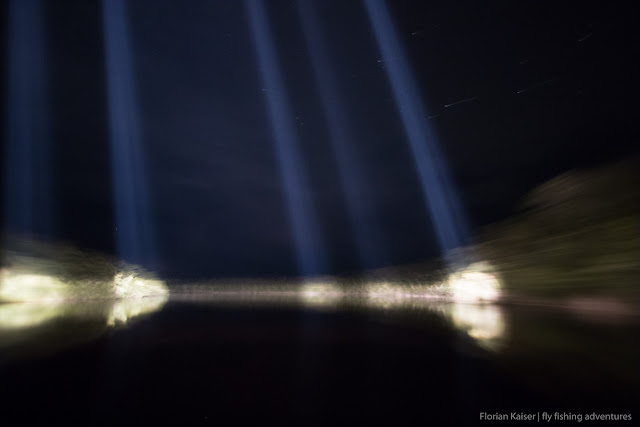 Only the spotlight beam gave an impression where we were on the river in respect to the banks, numerous twists and bends of the river. Aware of a very narrow section of the river followed by and immediate bend that I figured out from the map I was curious how we would continue and navigate that bottleneck at night. We did not dare to ask the captain as the atmosphere on the bridge was highly concentrated and only very few words exchanged. But it soon turned out that we would anchor just a few hundred meters downstream of that challenging section on a perfectly suited beach. The touch down on this beach was handled by Orleans with exceptional care and caution. Untamed Amazon touched the beach as if you would gently touch the face of your beloved one.


Imagine, it is most likely the very last you want to experience an out of control vessel of that size on a pitch black river in the upper Amazon. Horrible thought.

Impressions like these on the bridge are a lasting part of such a trip and a detail that is normally not available to a client.

I mentioned before that the fishing was only one (though important) aspect of this venue. A big part was provided by the various mentioned factors: comfortable ship, motivated, skilled and friendly crew, awesome location, good food and excellent service. To do the kitchen some justice and to provide some samples of meals Leandro and his team created: Thank you for that great part!

Knowing that it is hard to keep up the good mood on such a vessel among the crew, it will be a challenge to foster the spirit and good attitude. This needs to be done and supported by a good team, fair leaders, good food and sufficient rest for the team. Not easy but needed.
On the fifth day we would fish upstream Rio Marié again and Untamed Amazon would follow us, thus again another spot for the night. Imagine that, isn’t that awesome! We would reach a section of the river that probably was only fished during the scouting phase in 2014 by western fly fisher and before that most likely only a couple of times since the beginning of time by humans at all. Virgin water! 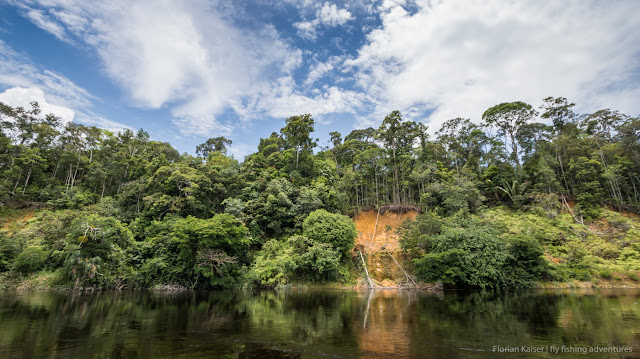 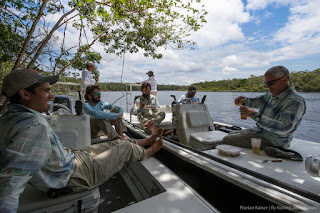 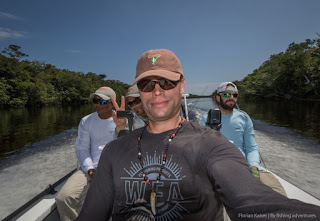 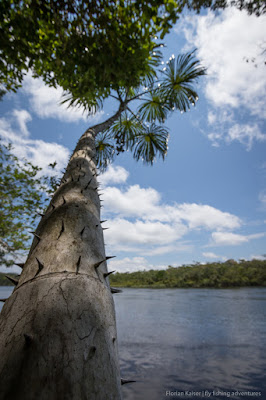 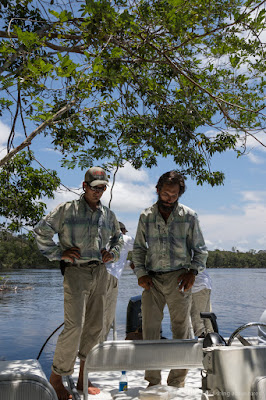 We fished it – with some success. One of the better fish of the day was a GPB of around 77cm (14-16lbs? cannot remember). On that day Breno started to get an appointment for the remaining days with large Butterflies – he constantly caught these in the 4-6lbs and even touching the 7lbs range. I checked in for the remaining smaller ones.

Again this afternoon a storm front build up. The thunder and lightning was coming closer and closer. We fished one of those smaller bays of the main river with some bites but not much success. Breno and I briefly communicated and agreed “let’s fish for another 15 minutes and then get back to Untamed Amazon before the storm would hit us” – it was just after 4pm. But both of us had eased our fish-thirst so we were willing to call it a day rather early. Exactly that we did just minutes after as the storm approached and hit us within minutes. Lightning very close by, we in the middle of the open river, heavy hard rain, we were totally soaked reaching Untamed Amazon close by and we were relieved not being fried by a lightning strike. It does not help to know that your chances to survive a lightning strike are something of around 70% - I just do not want to experience that.

Shower (semi warm, as there was no real hot water on Untamed Amazon) and a warming coffee did the job, only a piece of cake was missing.

Stay tuned for the last day of that awesome trip! 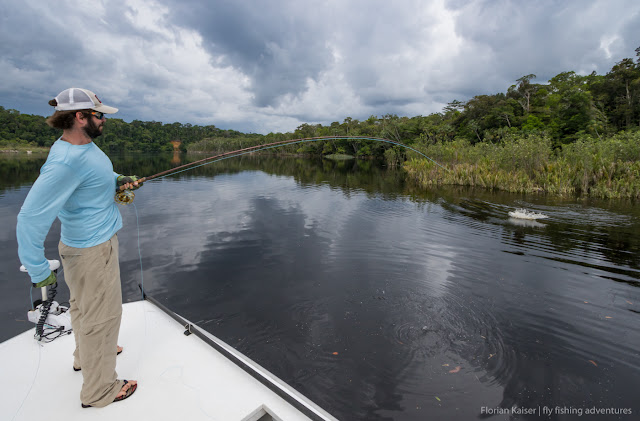 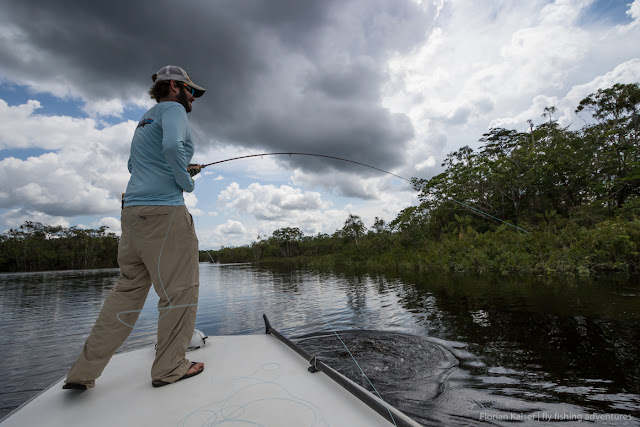 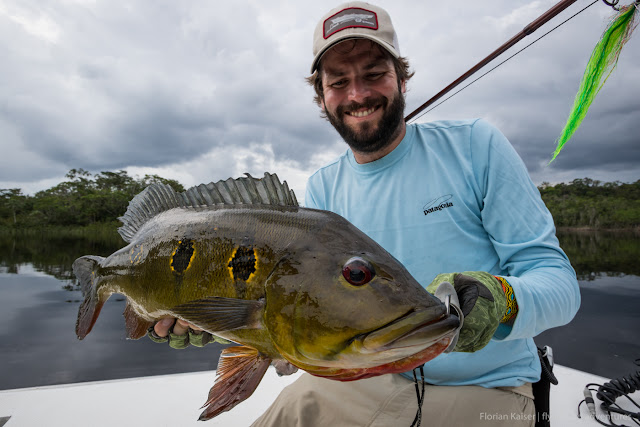