Our fourth day of our great adventure was guided by Agustin. Agustin spend the first part of the season at Kendjam, guiding there the first regular season with the new lodge (see my Kendjam Blog about Breno and my visit during exploration Season 2015 to this highly regarded Untamed destination). This morning in the bot, more ironically joking than serious I said: “I am going to catch a 28lbs fish today!” 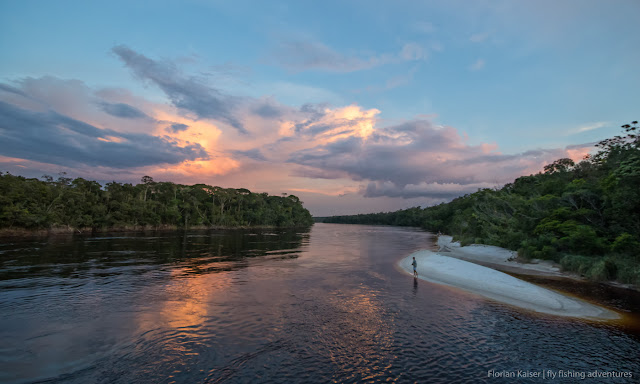 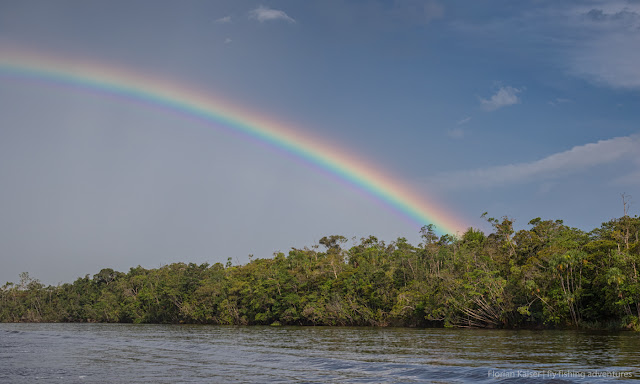 Fishing was again cast by cast to the shore and towards structure. Some fish to the boat. But not so many. We fished a lake with some freshwater Dolphin action. This made me put on my 70-200 2,8 Canon lens and taking some hundred shots of breathing Dolphins. To take a proper shot of them is kind of a challenge, as they are very quick. So only a low percentage of the shots would be sharp and relevant. 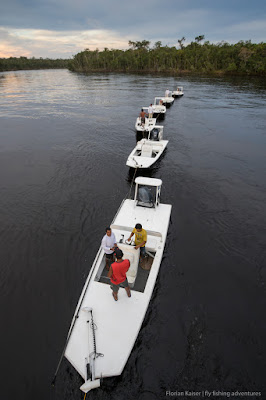 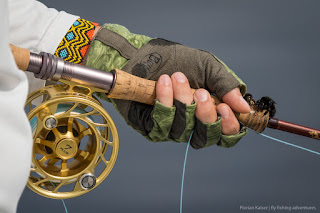 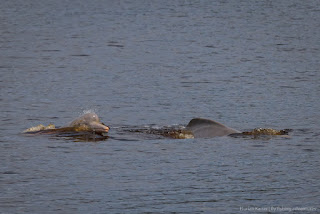 I was kind of distracted and took it very easy, several times switching between the fishing rod and the camera to take shots of the freshwater dolphins. As usual we changed the location several times to fish the various types of structure from lakes to lagoons to creek mouths. Eventually we fished a big lagoon with sunken trees providing the perfect habitat for the really big GPB. To that point it was a rather slow day, not many fish to the boat. I had changed my fly some time ago to a rather small white Deceiver with some grey/ blue sprinkled in that I must have tied several years ago for a saltwater trip. With this kind of fishing it is crucial that you are always focused on your fishing as you don’t want to spoil your low number of chances on a really good fish. Thus, either fish concentrated or make a break. I tried to keep my concentration as high as I could… 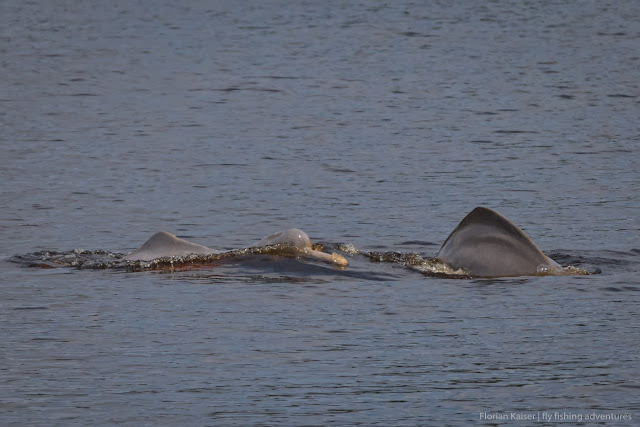 Fishing the mentioned self-tied fly on a 300 something grain sink-tip line on my 9 weight rod, letting it sink for several seconds to get it close to the ground, I started a slow retrieve with some shorter quicker pulls mixed in to trigger a possible following fish…


Not at the bank but kind of close I got a solid hook up and an obviously decent fish was hooked. That was not one of those Butterfly Bass that explodes but a solid powerful mass of fish. With those bigger GPBs the immediate judgment of its weight is hard as their behavior can be highly different. Some burst and dart away over 15 meters, as a good fish on Breno’s fly did (+16,5lbs) or show limited strength and can be dominated quickly as my 23lbs GPB from the day before. The fish on my line was possibly stronger as it showed a lot of energy right in the tight space between sunken trees, the close shore and the boat moving boat in the upcoming wind gusts. To add thrill I got a knot in my line (it might have been a freshwater line, but the tendency of lines to tangle was not much less with specific warm water lines, this specific line was a Vision as it was the only available at a German mail-order shop a year ago), Agustin was able to solve that while I was holding and fighting the fish with the remaining line. The fish knew its territory and managed to wrap the line at least half around one of those trunks of a sunken tree which are the home of these fish. This obstacle was solved by me and the fish showed its full beauty for the first time on the surface. 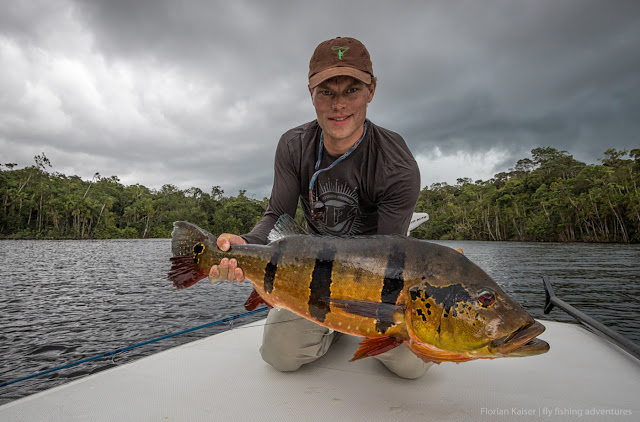 WOW! That was huge! The local guide tried to net it but as usual the fish got angry facing the net and darted away. It was kind of nerve wrecking – this was not one of those 7lbs NZ SI trout that you would prefer to land, but if you would miss it, you might catch another one in the next pool – this was a decent or even a very large GPB! A fish that thousands of fly fisher (and bait fisher) pursue to catch for years. So all of us – especially Breno, to make me quit moaning about casting the whole day - really wanted to land it! The next attempt to net it did again not succeed, I was afraid that the barbless fly would come loose and just pop out. If that would happen the whole jungle would hear some very angry Bavarian swearing (normally I do not swear because of a lost fish, mostly I laugh heartedly about myself, but in that case I would make an exception). Again the netting attempt did not work but the fourth attempt succeeded! Fish on board and just there we saw its size and weight. The IGFA scale and measure showed the measurements: just shy of 13kg, thus around 28,5lbs and +90cm (on some pictures of the measurement it looks more like +92cm)!

Holy shit – just about now we realized that this fish was not an “ordinary +20lbs GPB” but the most likely biggest Giant Peacock Bass ever caught on fly up to date! 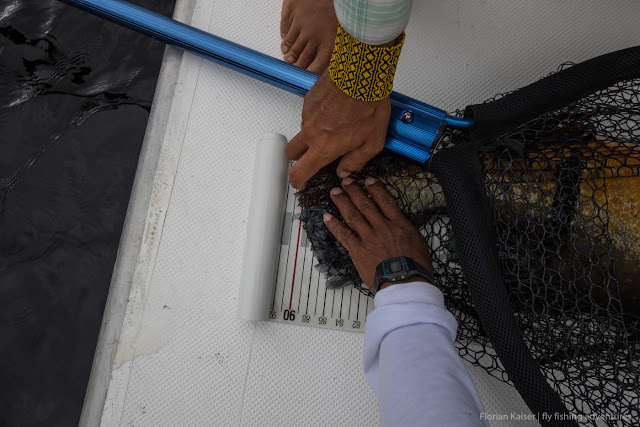 The crew was excited, Breno was excited and lucky that I could not further complain about this “boring casting casting…” and I felled a total new feeling I never had with fishing: kind of sports like satisfaction. Thankful, speechless, …

One annotation to documenting and landing that fish: Everybody aware of the IGFA rules knows by my report that this was not an IGFA-conform World Record but most likely just the largest ever caught GPB on fly. With IGFA I would have needed to use a 20lbs class tippet (which is kind of crazy with these fish, as it might lengthen the fight unnecessarily and or might end in a breakoff) and nobody would have been allowed to touch any of my tackle during fight and the fish would have been measured out of the net on the measures. We did not do any extreme posing pictures, so the fish size is not over exaggerated, the pictures rather understate its size especially compared to my tall size.

I am not a fisherman that needs or seeks attention as long as I am satisfied myself and had a good time out on the water. Thus I asked the team to not tell anything about it to the other guests. Celebrating the joy silently was the way. Only the locals spread the word and I got several thumbs up (real ones, not the virtual ones)... Stay tuned for the next days of this awesome trip! 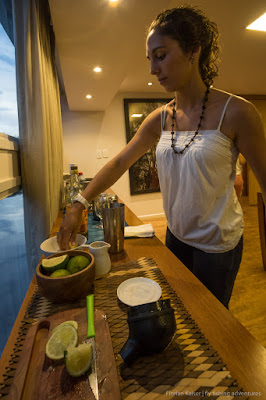 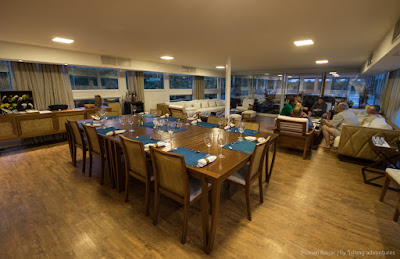 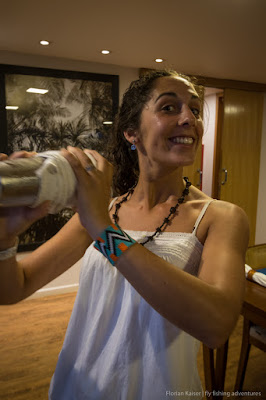