We drove up from nice dead end Okarito to not so nice through traffic Hari Hari. No the name is not a joke. But driving there we found a person right to the village sign being photographed by his partner – might be he was German and his name Hari – har har har. And there was a pile of filled plastic bags with a sign saying “My pony’s poos – 50cent a bag” – selling horse shit as fertilizer. In Europe they sell horse meat as beef. Unfortunately I always wanted but did not take a picture of that pile.

We found a not so perfect but ok motel accommodation (Flax Bush – not much choice in Double Hari) with some cats and a confiding neighbors cat (here are the cats in case you wondered about the hint in the last post). Part of the cleaning ceremony of the room – we waited for that – was to use some awfully smelling room deodorant. It smelled like in a catholic church after a real heavy incense ceremony. I immediately felt being beamed to a church in Bavaria and was about ready to go to the Biergarten. 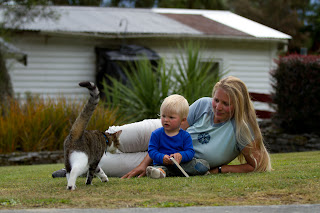 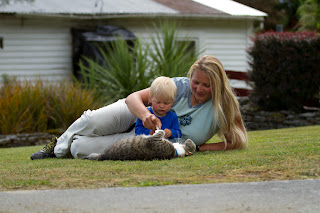 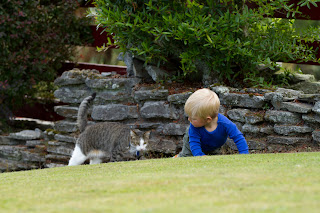 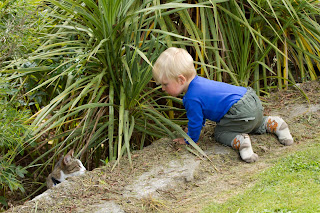 Double Hari is located just right on one of these rather large West Coast diary plains. In a couple of these landscapes there are nice spring creeks. Rather famous and except the best known – La Fontaine – rather short, thus most of them take one fisherman every few days. But most of them get fished more frequently. And exactly that was the bad and the good in our case. The plan was to fish one of the smaller creeks north of Double Hari. We drove there and on the access track we passed a fisherman that obviously had finished to fish exactly the stretch we wanted to fish. Communication with him (!) we figured out he was a fly fishing enthusiast from France traveling around the world to fish. We shared information and he mentioned that he had good fishing on the two km of fishable water on that particular creek. Still I decided to fish behind him – some curiosity how his fishing would have affected the fish. He mentioned a specific nymph – a nymph I normally would never have fished, as it is far from anything real. I call it the ESPT. He showed me this fly – I never had one of these and never fished it before.
Further down the track we parked the car, had a lunch snack and prepared our gear. The 3F (fly fishing French aka Ludovic) arrived and after a while he came to me and asked if we would have a GoPro as he saw a fixture for it on the side mirror. He needed some help with it to get his data of two weeks fishing to an external storage. I proposed he should come over at night to our motel and we could take care of that. After a while he came back again with two of his ESPT nymphs – wow cool! 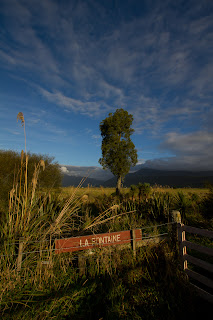 Fishing behind the 3F was tough. Saw several fish but rather spooky (no surprise). I ended up catching one and after around two hours I quit, Ines had turned around a little while before and came towards me with the Prado. Fishing behind somebody is definitely a challenge or just idiotic. Later that evening I tried to fish a small creek on top of the well known. But the water level was very low and the creek pretty much grown over by water plants.

This night we took care of the GoPro issue, Ludovic could for the first time watch his filmed 17+ minutes fight with a brown trout that I would assume was around double figure or even well in the doubles – he estimated it less. In my opinion the use of a landing net might have shortened the fight considerably. We sat long outside, drinking beer (Thanks!), being eaten by the mosquitos (Tobias was sleeping inside) and chatting about fishing. A nice fly heads evening. Besides his fishing success stories he had another interesting story to tell. As mentioned in a post some weeks ago there is a highly visible small fly shop some 50km south of QT close to Garston, I mentioned the lady there doing her job. Ludovic had an even stranger encounter with her. She treated him rather impolite and pretty much booted him out. Might be she was afraid of him because he was unshaved and not freshly showered and dressed? I guess every third trout bum entering that shop looks like that. I just mention that here because we thought she might have had a bad day as we were there, but it seems she had a bad month. Travelers’ advice: stock up on fly gear in QT and just pass by the hut in Athol. Or if you want to experience something special: go there and ask a few questions.

The next morning I set the alarm clock to 6am to get to the river (the major spring creek close by) before dusk to fish the morning rise to be able to fish to some active fish – at least that was the plan. I was at the river well before the sun. I watched a nice sun climbing over the horizon, mist being evaporated by the increasing strength of the sun, a hurdle cows relocating from one paddock to the other as driven by a magic hand, but what I did not even see was trout at all, not to speak about active feeding trout. There was nothing on the river! Nothing! Might be some body used some 1080 the night before. A nice early morning on the water that totally destroyed my sleep-balance. It was funny to stay and wait for three hours on a river that was supposed to be full of fish without seeing any animal besides bees doing their work and farting cows. 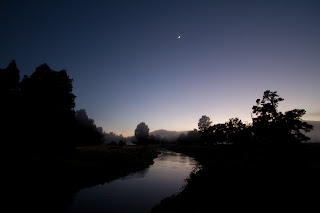 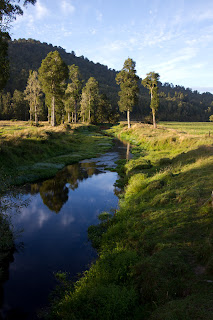 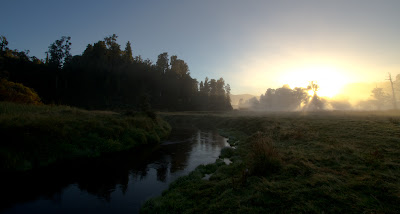 I was back with Ines and Tobias close to 11am. What to do with this day? A drive to the small village Ross. There we found a cafe and a gallery with an original etching of Pauline Bellamy that I was close to buy but did hesitate. She seems to be a relevant NZ artist – what finally made me hesitate to buy that non cheap print was here overall wired oeuvre. On the way back we passed a small creek that I wanted to give a few casts. Ines and Tobias drove to the nearby ocean and I was given two hours to fish. I did pretty well ; ) and caught 4 nice trout and lost another two or three. All on: Blow Fly! I was warned about this river ‘if fish are too spooky leave the place’ – I found them very cooperative. All around 4 to +5 lbs. I saved some of the relevant water to give it a chance the day after with Ines, so I had to walk a longer stretch via the road and a farm track to the designated meeting point upriver to avoid spooking the fish. 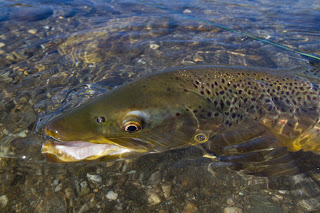 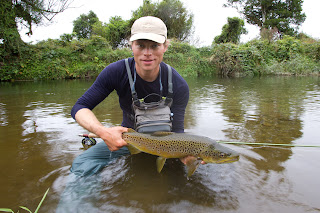 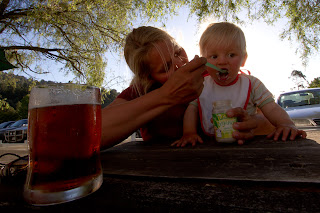 We went back to Double Hari, had a decent fish burger at the local hangout (I cannot call that restaurant) and I was off again to fish the creek from the morning for the evening hatch. Third time fishing on that day! The evening hatch was much longer than the non-existing morning rise: exactly 10 minutes and about five fish made use of the surface feeding option. I made use of this time slot and caught one. Strange creek – I must have fished on the wrong day.

After and other night in Double Haris Hilton we drove towards one of three larger villages on the West Coast: Hokitika. Before that we gave the saved upper part of yesterday’s afternoon creek a go. I tried to guide Ines. But I saw only two fish at all which were a little bit unforgiving to Ines. Seems like that creek is really less interesting further up above the bridge.

In Hokitika: Greenstone on every corner – three years ago these pieces where cheaper or? Right at that weekend there was the Wildfoods Festival in Hokitika. A Festival more of wild people and music than of wild food.

Just after we did our groceries before going to the festival, we were right outside on the parking lot packing the goods to the car, an acrobatics show started on the blue sky. Five yellow painted stunt planes did some fascinating figures. That was the perfect target for the Canon 70-200mm, 2,8 IS II! What we saw was the “The Red Checkers -  RNZAF Aerobatics Team”. 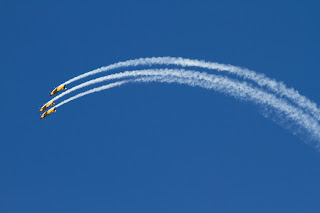 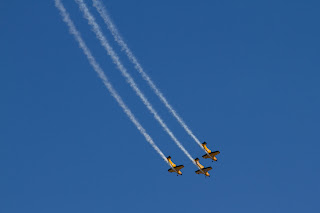 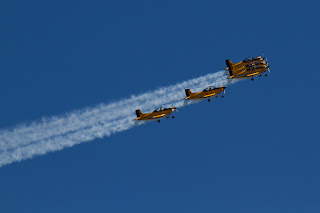 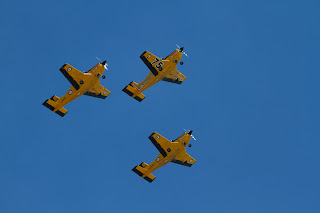 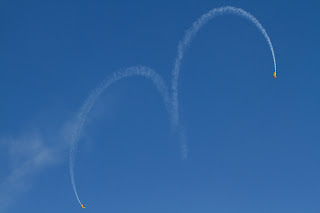 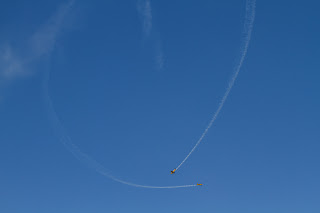 The real wild food such as beef tactical sausages, worms or cicada was not available or we did not find it due to not looking intensively for such tastes (as Ines announced it a few days ago I was already looking very forward to some exotic gourmet thing …). So we went for the sold burger option: ciabatta instead of a bun and as desert strawberries with ice. Picking some beer I thought the beer selling person wanted to make fun of me has he said he could only sell me one mug of beer at a time. So I had to go a couple of times. In Munich you can order 10 liters at once on that specific big Touristparty in late September. Here you would have to go 30 times to get 10 liters – the Kiwis care more about your health!

Most of the people at the festival were dressed in some more or less funny costumes. Most of them having fun and about to get drunk. We did our part of irritating the people by letting Tobias freely push his stroller over the area, so even some semi drunk guests and the Police asked us if the happy smiling adorable baby would be ours. Fun afternoon – even if there was no fishing involved!

Our campsite for the night was DOC at Lake Mahinapua – a nice site that got really busy that night, but everybody was quiet. We were lucky as we pitched our tent at early afternoon before going to the festival. Among all the guests we finished cooking latest (delicious lamb chops) – we made it just before the official quiet hour on that campground at 10 pm. 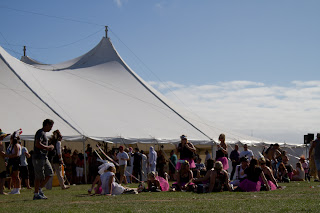 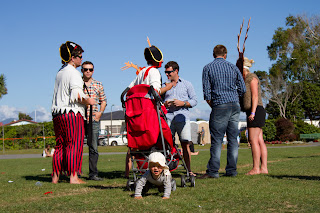 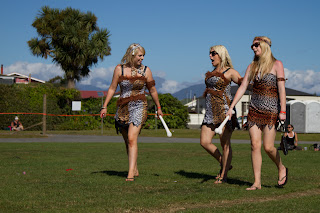 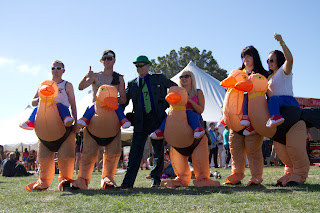 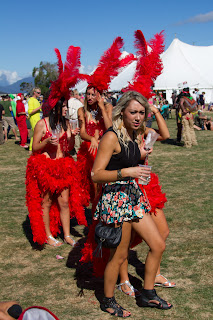 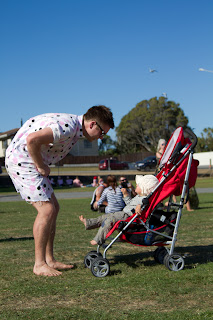 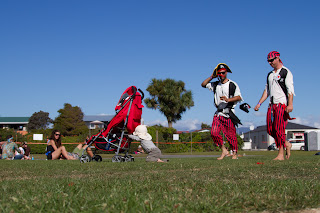 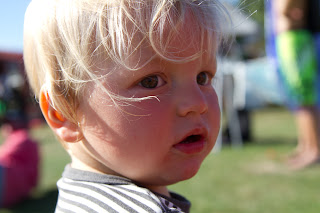 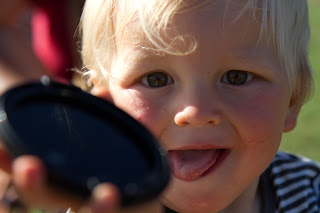 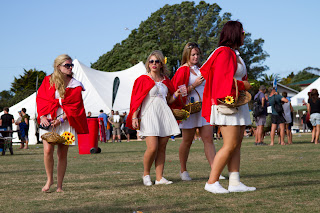 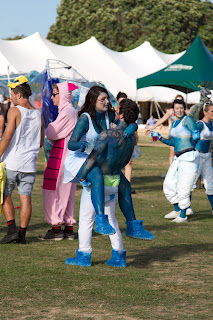