Te Anau – another stream or two - finally heading up North.

Another day (Sunday) in Te Anau, doing pretty much nothing besides shopping, drinking coffee and doing some blogging and relaxing in the summer sun. We still stayed in the Rustlein cottage described before, but description does not compare to pictures. As mentioned the cottage was well equipped with a special original touch. We pretty much extended the stay in the cottage day by day, calling or meeting the owner to repeatedly tell him that we would stay one or two nights longer. Besides that we made arrangements with Karen and Rob, that came over to our cottage for a chat, to go to a river on the next day. I always wanted to fish that distant river on the other side of the lake, so I was looking very forward to Monday. 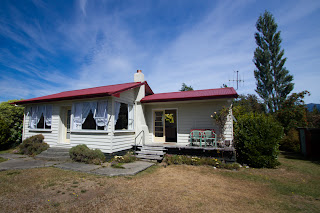 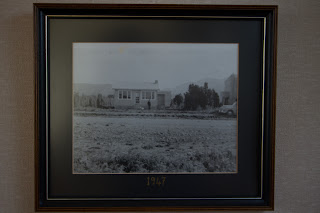 After doing some search pattern driving in Te Anau, as we did not see their boat at the boat ramp, we meet them exactly at the boat ramp. Loading gear and bringing the boat to water. Leaving the harbor the fog was so dense that you could only see around 50 meters. Luckily nobody besides we could see the course we went. As the boats GPS was a big one but without a map of the lake, we had to rely on my small Garmin with a detailed map of the lake. That was funny in some way, but I was little afraid of the headline “Four persons and a baby missed after boat crash in dense fog at Lake Te Anau” – it was pretty much total white out. After a while the fog cleared and we headed towards our destination - a very special part of the lake - over a calm lake.

The river was totally low but this provided rather good wading and casting to that normally less accessible river. A beautiful river that hosted less trout than I expected. Most likely due to the low water. I caught a couple with one brown of around 4 lbs. doing a jump close to 1,3 meters high and a second one close to 1meter that I filmed (this fish puzzled me so much, that I “placed” my net close to its landing, just to find it again on the way back). Before that Rob landed a nice one right opposite of me so I could take some pictures. In the meantime the ladies with Tobias were following on the track on the bank. We did not fish long so our partners would not have to wait too long. The way back provided a section of good waves and wet deck.

A very nice excursion and a good day, thank you for that! 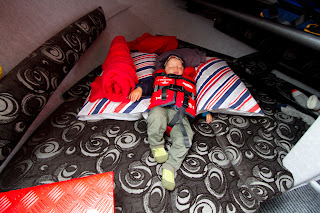 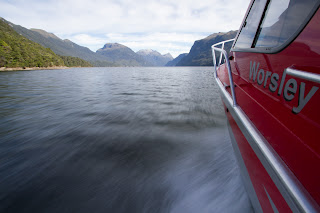 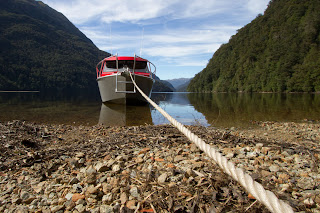 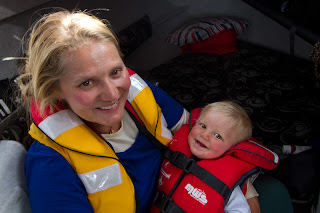 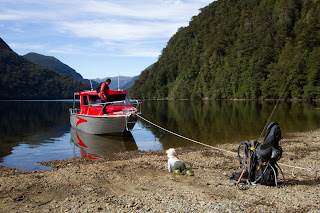 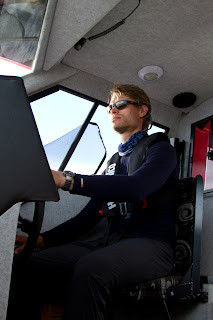 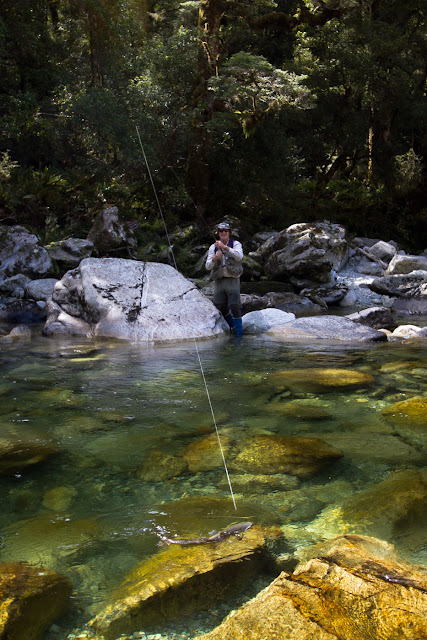 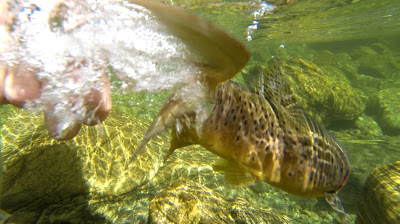 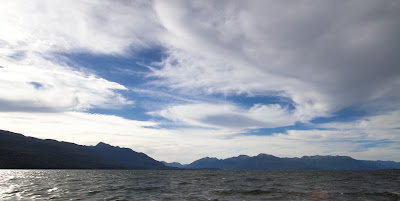 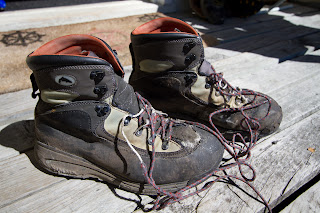 Tuesday I tried to get some – as I found out after some research – black drawing salve to treat an infected big toe nailbed that badly hurt while walking, caused by excessive walking and wading in waders. The pharmacist in Te Anau did not even have the faintest idea what I was talking about. I strongly doubt its competence. Black drawing salve is good to treat deep infections and to draw spines/thorns out. I knew about that and how it is called in German “Ichthyol”, found out that the active part is called Ammoniumbituminosulfonate. It did not help.

As the weather was sunny and even hot - unusual for Te Anau - Tobias had again a bath outside in one of our storage boxes. Covered in his swim suit to avoid to much sun exposition he enjoyed the water -  even without fish. The alternative was the sink in the washing-room. Besides water, he loves NZ avocados! Buying them here for around 2-3 NZ$ a piece, you start to think about our sub 1Euro never tasting avocados. 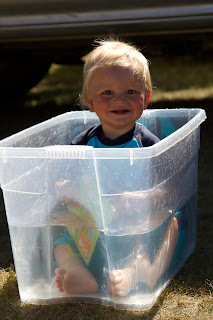 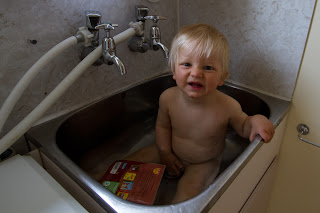 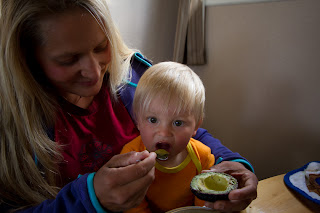 In the afternoon I fished some secret water. Severe bush bashing and delicate spotting and fishing. No pictures of that in the media. Two broke off and one to the net.

Some further research on the toe-thing. Finally I found out that the NZ product “comparable” is called Egoderm cream and available at the pharmacy. But the dose of the active ingredient is 1%, whereas I was used to 20% as the original Ichtholan, that is used actually for exactly what I needed it. Why do I describe this in such detail? I was wondering that a rather common and well known German medicine is pretty much unknown here. Not really surprisingly considering e.g. our knowledge about native South American rainforest cures. Besides that, I will – besides some anti-inflammation wound healing cream, hay fever medicine and Neutrogena Lipstick – put Ichtholan on the future NZ-fishing-medicine-list.
Knowing the product it was easy to get it the next day – hope the pharmacist learned his lesson (I doubt it) – applied it three times and the toe was ok.

Wednesday was the day of leaving Te Anau after eight days. Ines an Tobias enjoyed this time of continuity and summer sun. We packed and left Karen and Rob a small present: a framed and mounted picture of Rob catching the fish on the river we went together. 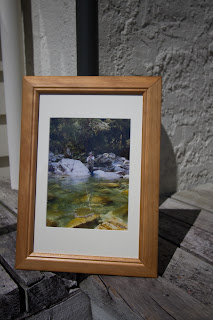 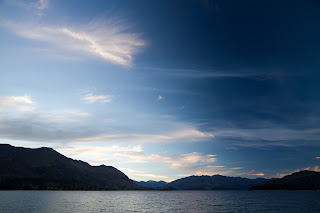 After groceries in Frankton we continued our way over the Crown Range directly to Wanaka and further on to the nice campground “Kidds Bush Reserve Campground” 25km north of Wanaka. 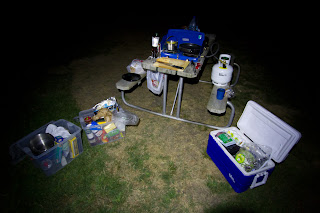 There we had a really nice tuna steak. Save the endangered tuna! I prefer to have it on the fly or Jigg. The tuna had to be prepared in our mobile camp kitchen: two flame gas cooker with large 5kg gas bottle, chilly bin, 40l Warehouse storage box for the food and another storage box for the cooking tools and dishes. If the fixed camping table would not be there we would use our portable camping table. We can do everything in that kitchen besides freedom fries. Setup takes just a couple of minutes. The only bad thing is: we cannot store more fresh salad, milk, cheese, salami, lamb, meat and bread for more than three days: just not enough storage space. Ready-made meals are not a real option if not needed. For wine I defined one rule: not more than six bottles in the car. Our maximum up to now was five. So extended with one day beer that would be good for close to one week.

After a good night at the Lake Hawea we headed back to the road. Close by was a lodge that I figured out for our very first visit to NZ but ended up not to book it as the fishing in the closer area without the need of chopper access is limited. This time we went up the gravel road to that remote place called Silverpine Lodge. An oncoming vehicles driver asked for our plans. It turned out that the friendly lady was the owner of the lodge. She turned around and showed us this terrific place. We considered spending there one or two days after our planed chopper excursion to a river in the Haast area, as the place was really special.

PS:
Bonus 3F or "Florian's first footage" about a pretty average rainbow trout caught and released during the trip described in the post before. It came at the second cast to an Adams. GoPro Hero 3 & some post production... VERY first try. But one of the few takes where everything from presentation to release is available. The Rainbow in Fjordland 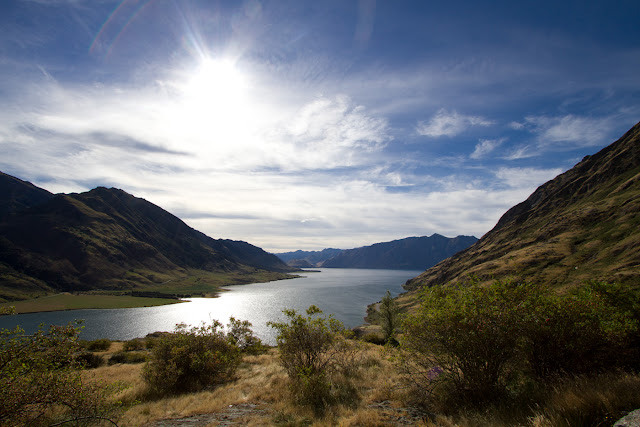