Following these two days of enjoyable and outstanding fishing, we were Te Anau bound for some washing, relaxing, shopping. As mentioned before Te Anau - might be around a couple of thousand inhabitants - is based on the summer tourism. So it sometimes is a challenge to get a suitable accommodation. Unfortunately the coolest house right on the lake in a an acre of ground with +300sqm was just hours before booked, so went for the cheap and less fancy option and found a simple bach. It turned out to be one of the very early houses of Te Anau. Built in 1947 bin the middle of bushes. In the meantime it is in the middle of a housing area. We were guessing how large this house would be and ended up with something of around 50qm. With neither cellar nor any other space to store stuff. The basic bachs' condition is left (besides some renovation) more or less somewhere in the last century. Funny. We were glad to have two large beds, a shower and a kitchen, it was clean and good for up to five people. It turned out that it would later become our home for over a week. Pictures to follow in the next post.

Next day (for Ines: Wednesday) was a day of sleeping long, organizing, shopping and planning. The plan was: the old boy heads back to the distant Fjordland River (some research at DOC and the fly shop led to the conclusion that I might be alone on that river) and the girl with the small boy would stay in Te Anau to get some relaxation from the old boy. This meant some preparation in terms of DOC clean gear certificate, transfer and food for two nights at the river.

Ines figured out to do a guided tour to the subsurface Manapouri Hydro-Powerplant and the Doubtful Sound which is actually a Fjord - the longest of NZ. (Some lines on that might follow later, if Ines finds the time to do some writing)

The weather for both plans looked perfect, just some light rain for the start and then clearing skies.
The Boat Taxi picked me in Te Anau. The transfer over the lake was done with reduced speed due to significant swell from the strong southerly winds. Arriving at the hut: yeah - no body there, the hut and the river just for me! It could not get better. Oh, yes might be some fish added. 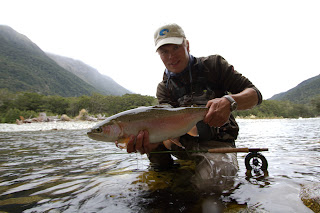 The lake was on the lowest level I have seen it, thus the river might be very low too. And that it was, it was easy to cross the lowest part and get access to a small tributary. Even going there I spotted and spooked many trout, it seemed most of them browns resting close to the banks. They were absolutely passive. No reaction to fly and only spooked when I would have touched them with the rod tip. It must have been related to the river level/temperature/algae growth (no NOT didymo!). Fishing upstream started slow till I figured out to ignore the sleeping browns and to search for active feeding rainbows. That plan worked out. In the known holding areas and currents I found willing rainbows. First with the nymph and as the day progressed and I wandered more upstream with the dry. Especially some fancy Cicada pattern that did absolutely not look like the natural ones. Fishing was like cheating. Amongst other typical fascinating and cicada takes, I caught two by just making a long cast to the other bank without any clear target and caught one as my fly was dangling downstream in the water or made a fast swing. I did not see it, but a nice rainbow came to the net. All of them around 4 to 5,5lbs. I lost count of the total caught. Seven or eight? One fish was specifically impressing, the rainbow fought like hell and turned out to be a feisty 5,75lbs fish that made me to cross the river to land it. It had very few spots, small head, high body and a tail that was not made as a handle for fisherman. I could barely hold it.

Turning around after 7pm tramping down to the hut, that I found as I left it, so I had it for myself. Lightening a fire to get it nice and warm, cooking (ready-made meals from the supermarket "Butter Chicken" - no freeze dried stuff). After two glasses Church Road I was nearly too tired to tie a few nymphs, sleepy I made four of the magic nymphs to fall from the vice and I fell to bed. 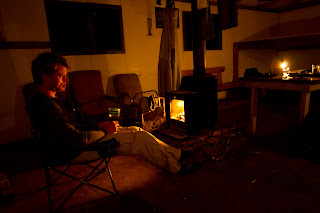 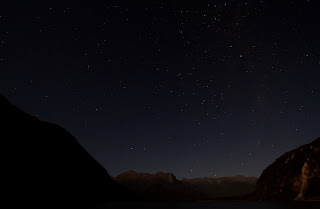 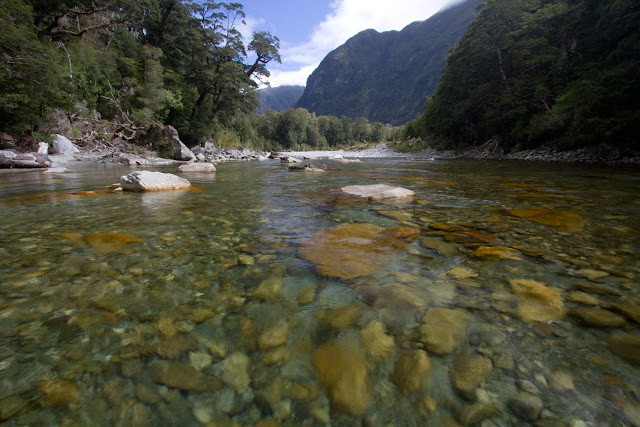 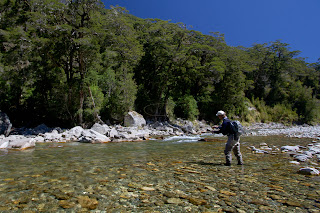 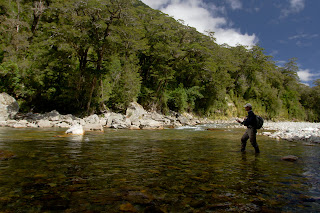 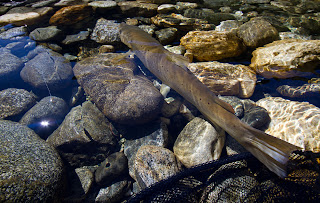 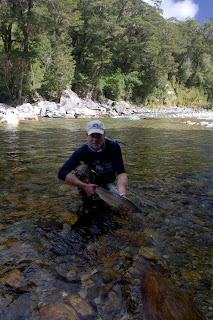 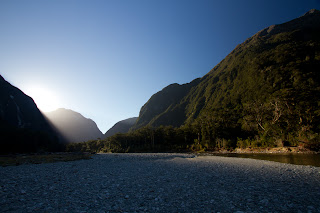 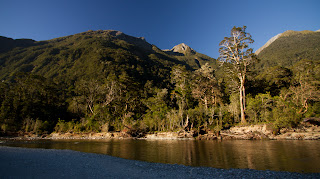 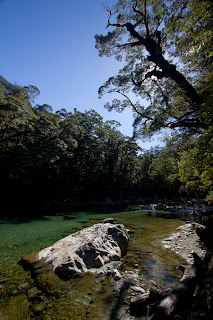 Today (as of the time of writing!) I started to tramp upstream for around 45 minutes to start of a pool full of fish. Crossing down below and starting to fish most of them where gone. No worries, most of them where browns. Those fish, that seemed not to react to a fly these days. I continued upstream, tried to do some filming from the tripod, but this additional stream of thought seemed to distract me too much, so success was low while trying to film. What I love about fly fishing: if you think of something else, you are not fly fishing. At least that is valid for me. It distracts you totally from anything else and draws you in a separate reality.

I went back to that reality and again a fish found my fly. Some situations were ridiculous, as I was literally catching fish by fish. Three fish are worth to be described in more detail. 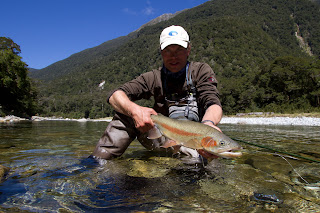 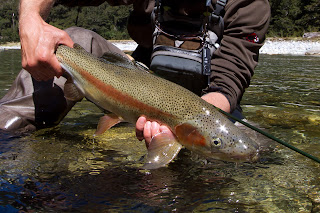 First: I caught the one 5,75lbs rainbow with the small tail and the few spots again. It was again in good condition, might be it fought little less than the day before.

Second: again a rainbow, but this was fighting like hell, going up and down and across, always heading for stones to rub of the line. I had to follow as the fish was in a maze of stones on the distant shore. Close to netting it, I still had to follow, the river was not so low on one point and I got water in my waders - as usual I wear them belt high - but managed to net the trout. I was just over 5lbs but made action like a much bigger bow.

Third: on the pool of return (a huge around 3-4meter deep pool) I was tossing the cicada pattern and already close to the downstream recast got a close-to-take from a huge looking rainbow, that by this action told me her lay. As the fish looked around 8lbs something, I waited a while, did a fresh leader tippet (this time 0,20/8lbs Fluor due to the stones not so much because of visibility. I hate its knot behavior so I avoid it most of the time in freshwater) and prepared to recast. Cast- fish came, took the fly and the hook was set and got a good hold (I just about yesterday started to fish barbless in NZ - till now I did not do it as none of the guides fished barbless. I was lucky to fish barbless, as the big cicada patterns are frequently finding a hold behind the lip, making the fly removal without barb much easier - I can only recommend that. I did not lose a single fish today due to the missing barb). I was fishing that bow from a huge rock and in front of me the pool that immediately had around 1,3m depth and holes between the boulder that where much deeper. I really wanted that fish. Totally persuaded it must be around +7lbs or even close to 10lbs. So when the fish made its run I did not hesitate to follow him in the water (remember: my waders were already wet, it was the last fish of the day and I could not say no to a bath after a hot sweaty day in the bush). First five steps - then, where was the ground - oops I had to swim. Thanks to the patagonia absolute water tight back pack I could swim relaxed and the Canon would be save - if you call it swimming holding a rod with one arm and managing the reel with the other. I had to swim a couple of meters, happy to get solid ground under my feet and getting back to the beach. The tuck went on for a while but I finally managed to get the beast to the net. On the scale came the surprise: just a little over 6lbs! Wow what a fight for that size of fish, imagine if it would have had towards 10lbs - it would have dragged me all the way to the hut! 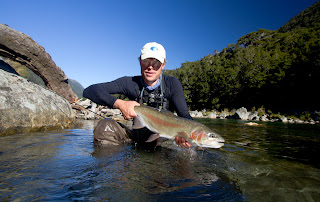 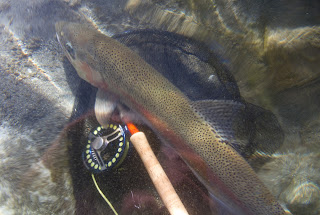 That again was one of those red letter days! Thank you River and Fish, thank you nature, thank you Ines to let me go! (BTW: lovely surprise in the cookie box! : ) )

The way back went with the turbo of motivation.

At the hut, a last "listen carefully" thing: chopping wood with a piece of metal (it was said to be and axe but and axe should be sharp), I was saying to myself 'take care of pieces jumping back from the impact'. Just seconds later a massive trunk airborne from the full force impact with the long handle "axe" impact hit me with full force in the right knee. I just went to the ground and could not even scream. That was not the kind of pain I prefer (side note, I am talking about endurance biking). The already swollen right knee has now a reason to be swollen. I had to treat it internally with half a bottle Church Road red. 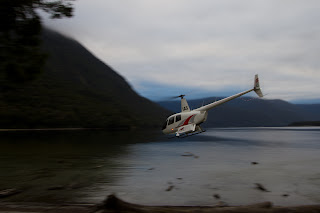 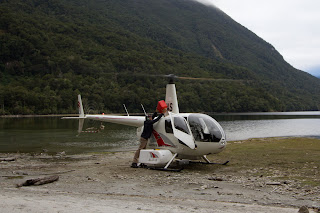 (Text continued several days later) In the morning of the third day I have been woken by the sound of a chopper. Here? Rather unusual. I more or less jumped out of the bed (rather slowly with the funny knee) and had a look. The early guests were rangers taking care of the trap line (in control of small mammals), exchanging the traps and the baits. The low lake beach provided a perfect non dusty chopper spot to land. When you ever wanted to know how a chopper is filled with fuel - look at the picture. 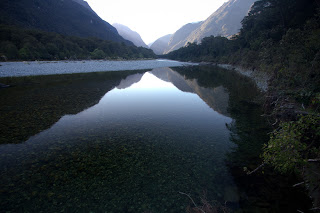 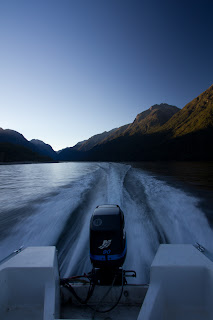 This day I wanted to fish a distant upstream section of the river, starting around an hours walk upstream about where I ended the day before. A nice walk but it went ok with the knee. My legs found the well-known track nearly by themselves. Fishing was supposed to be of the same quality as the two days before. But who knows why, the fish just did not stick to that rule. It was hard for me to get them to the fly (still the same as yesterday) even as some of them were actively feeding. I had a hard time. They were spooky or fuzzy about my offering. To at least catch three fish I wandered all the way up to the camp spot I used some weeks ago, only to catch the third and thus the last fish of the day in the "camp pool". The two hours back to the hut with the knee were special.

Nevertheless even less good days on that river are terrific.

The boat taxi came a head of time and we went back over a calm lake.

What a blast these two first days! Wow!

Bonus 3F or "Florian's first footage" about a pretty average rainbow trout caught and released during the trip. It came at the second cast to an Adams. GoPro Hero 3 & some post production... VERY first try. But one of the few takes were everything from presentation to release is available. The compression n the blog is awful, so please use the Vimeo Link and comeback:


The Rainbow in Fjordland