Lodge aka Untamed Amazon schedule is: 7am breakfast (with your likes of eggs, fruits and toast), 8am to around 5:30pm fishing, 7pm appetizers, 8pm dinner – in between fishing till the line would break – that for six days in a row!

As we were altogether five boats with two fishermen each and five guides but six days to fish, the first two days all of us were assigned to one guide. After that the guides would be rotated daily. Thus everybody would have at least one day with each of the guides.

For the first two days we were assigned to a young guide that did one of its first seasons. We fished up Turi River a large tributary of Rio Marié, as the main river was still rather high on water level that was a good option. High water level means that the wetland (medium sized trees and bushes) would still be partially flooded thus the Peacock Bass would be in these areas and close to impossible to catch. Thus lower or low water is what you want. The group in the week before us had pretty high water and a tough week, we experienced slowly dropping water. Possibly the best season in terms of water level would be October to November – heavy rain might change that, as it does to many fishing plans (see above about Tsimane and the day off due to flooding). 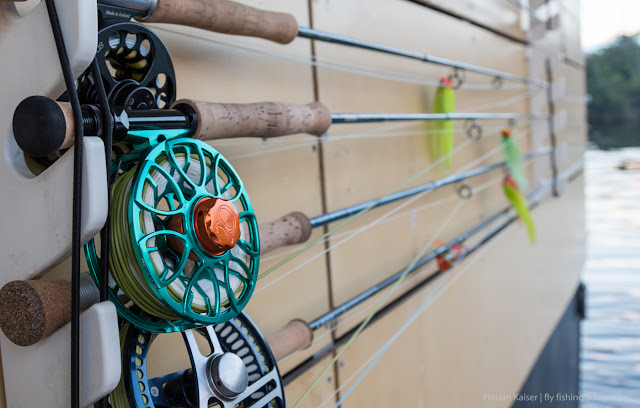 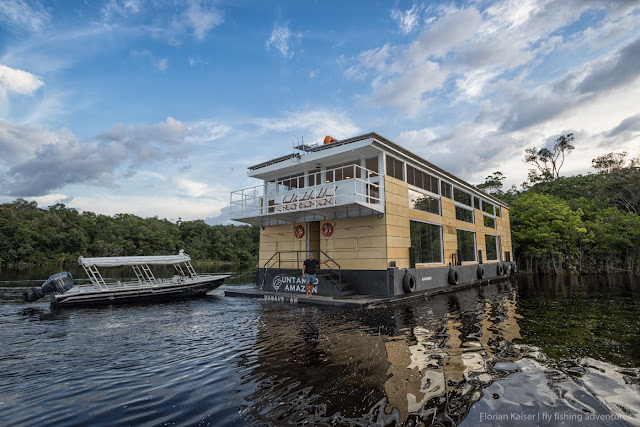 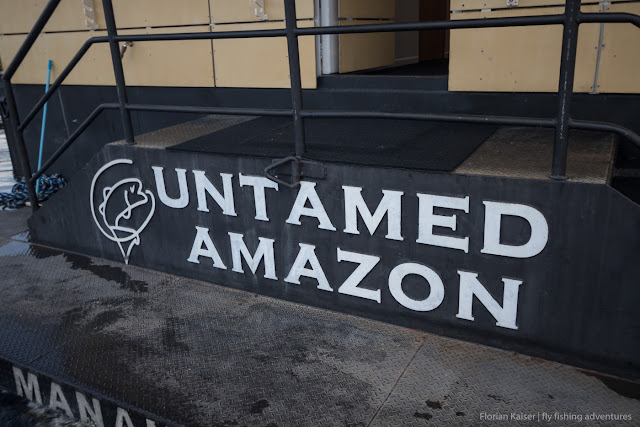 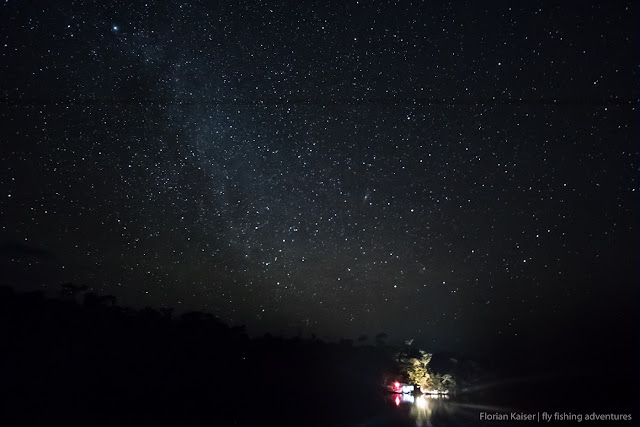 We caught several colorful Butterfly Bass that did fight like hell. Hooking such a Butterfly of around four lbs makes you wonder if you just hooked a 15lbs Dorado before you realize that it is just a small Butterfly Bass. Breno caught a very nice Paca (non spawning color of the GPB) of around 9lbs (4kg) with a beautiful bronze color. He and I caught a couple of Butterflies to keep us motivated but nothing of special relevance took our fly besides the Paca.

To cover the water thoroughly and to improve chances to catch one of the big ones, the guide might cast teaser lures (without a hook) that make big noise to attract the fish. He only does that when the clients want it. We used it sporadically to check for fish and to wake some up. Sometimes it seemed to work sometimes not. I got the impression that it attracts fish that are active anyway but on days with low activity it did not add anything.

Second day we were on the boat with Everton again. Breno landed a 7kg or 15,5lbs Assu GPB that showed a crazy run of around twenty meters and provided a good fight. I caught a mixed bag of Butterflies again. Honestly this kind of fishing started to bore me. I do not like to blind fish with a streamer the whole day. The visual aspect of SI NZ trout fishing is so much more pleasing to me. For GBP it is fishing in dark tea colored water, casting towards structure, ever and ever again. Hundreds of casts a day. The climate is hot and humid, not a problem if you drink plenty of water and if you are fit and used to do silly stuff such as pumping your heart up to the max going up a steep track with your mountain bike. Still, tossing a streamer the whole day is not the most preferred activity for my taste. Once in a while there is some action by the other species such as the mentioned strong fighting Butterfly Bass. Don’t get me wrong, I am writing and commenting the style of fishing from my humble and highly personal perspective! 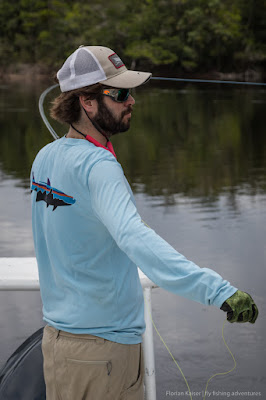 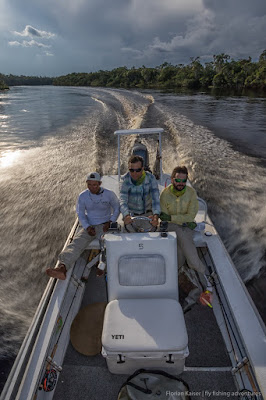 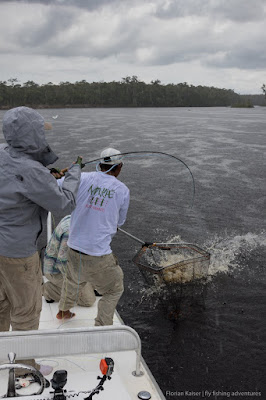 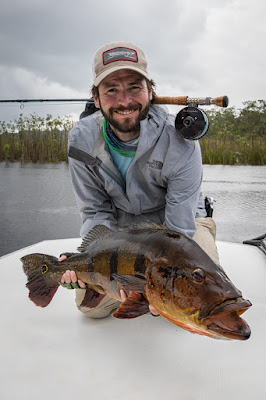 As I am far away from being a GBP-addicted fisher, these first two days overall had very little appeal to me from the fishing aspect. I was really not overly happy about that stile of fishing. Blind casting the whole day to more or less likely structure. But if you are in GBP-fishing and know about the quality of such a fish beyond the magic 20lbs mark the motivation is likely very high. Besides that, the place, the Untamed Amazon, casting to fish with the fly that most likely never had seen a fly before, in the middle of remote Amazon, at a place that might be one of the very last far away from any street or man-made structure on this tortured planed – all this adds to a whole thing that is far beyond fishing! And the sum of all that makes Rio Marié venue such unique place and destination!

Only a very stubborn will not love that place. It is far beyond fly fishing. During the day the next cast and the hundreds to come dominate your mind. It is kind of ZEN, thus it is best to focus on the single parts of the cast, the next point to land the fly, let the fly sink to the according depth and strip it back highly concentrated in the most appropriate manner you are able to. Doing every single step in the best possible way – that is ZEN. Sometimes slow sometimes fast and change your retrieve in between for one or two strips as GPB might likely follow your fly but have to be triggered to inhale it. 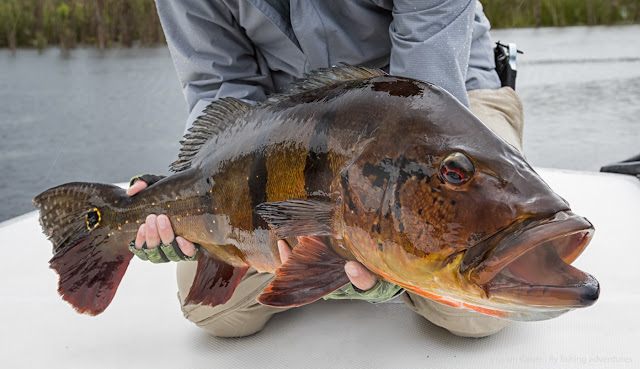 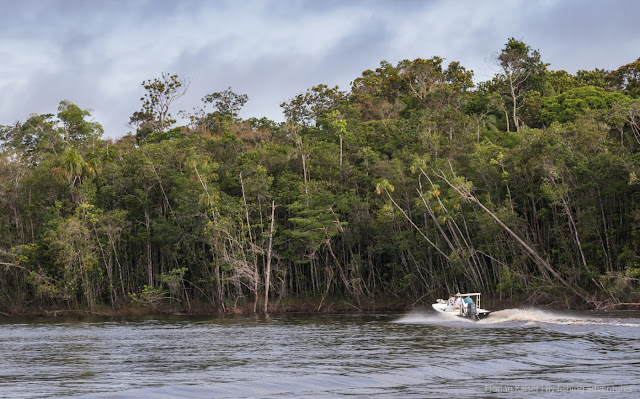 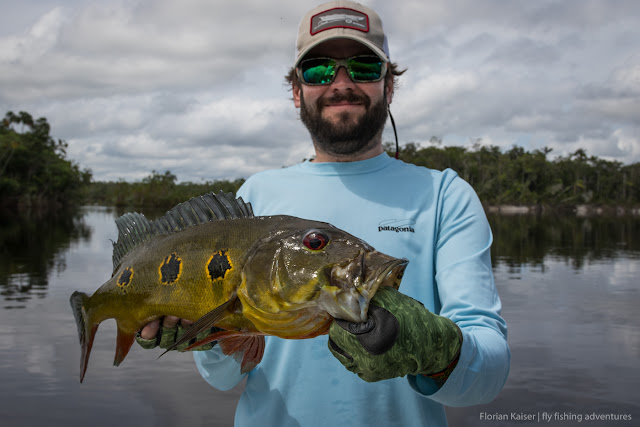 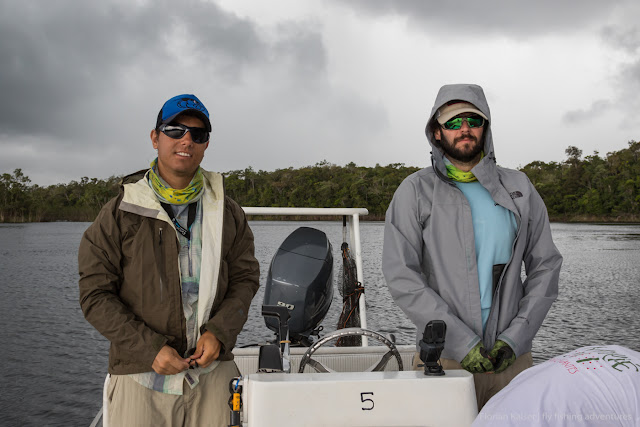 At night time, the crew, the mates, the dinner, the cigar and the one or other glass of Whisky ad so much to the whole experience. It is not just the fishing. It is definitely the whole package, being there, experiencing the atmosphere, being at a place that very few humans have been before. Just Wow!

Second day at around 3:30-4:00pm we were fishing around and hour upstream by the skiff from Untamed Amazon (thus around 40km) as a storm with heavy rain hit the area. We got in our rain jackets and started our way downriver. One hour with some 50km/h and the cold rain hitting our faces like thousand needles, made us freeze to the bones. Advice: Do not go to any jungle destination with a good three layer hard-shell – you might not need it, but if you need it you will be thankful! And take one warm jacket, it might not get really cold, but even humid 15°C might feel like winter close to the equator! The thunderstorm was kind of behind us. I hate thunderstorms when I am in the open wild. No way to control them. We reached the lodge totally wet but safe.

One word about our Russian friends, they were not of that cliché kind prejudice might have expected them to be. They were all avid fly fisher and they did not drink all night long. Except for the first two evenings they went to bed very early and did not vaporize boxes of vodka every night. Their tactic was more to start drinking before lunch and combine that with intensive fishing and early rest at night.