Winding road towards the steam

The following lines and posts are written with the journey already some weeks ago. So details might be mixed up and impressions more reflected or more biased. Happy reading!

This time the accompanying wine is a Krapez Merlot 2004 from Slovenia (!). Delicious! 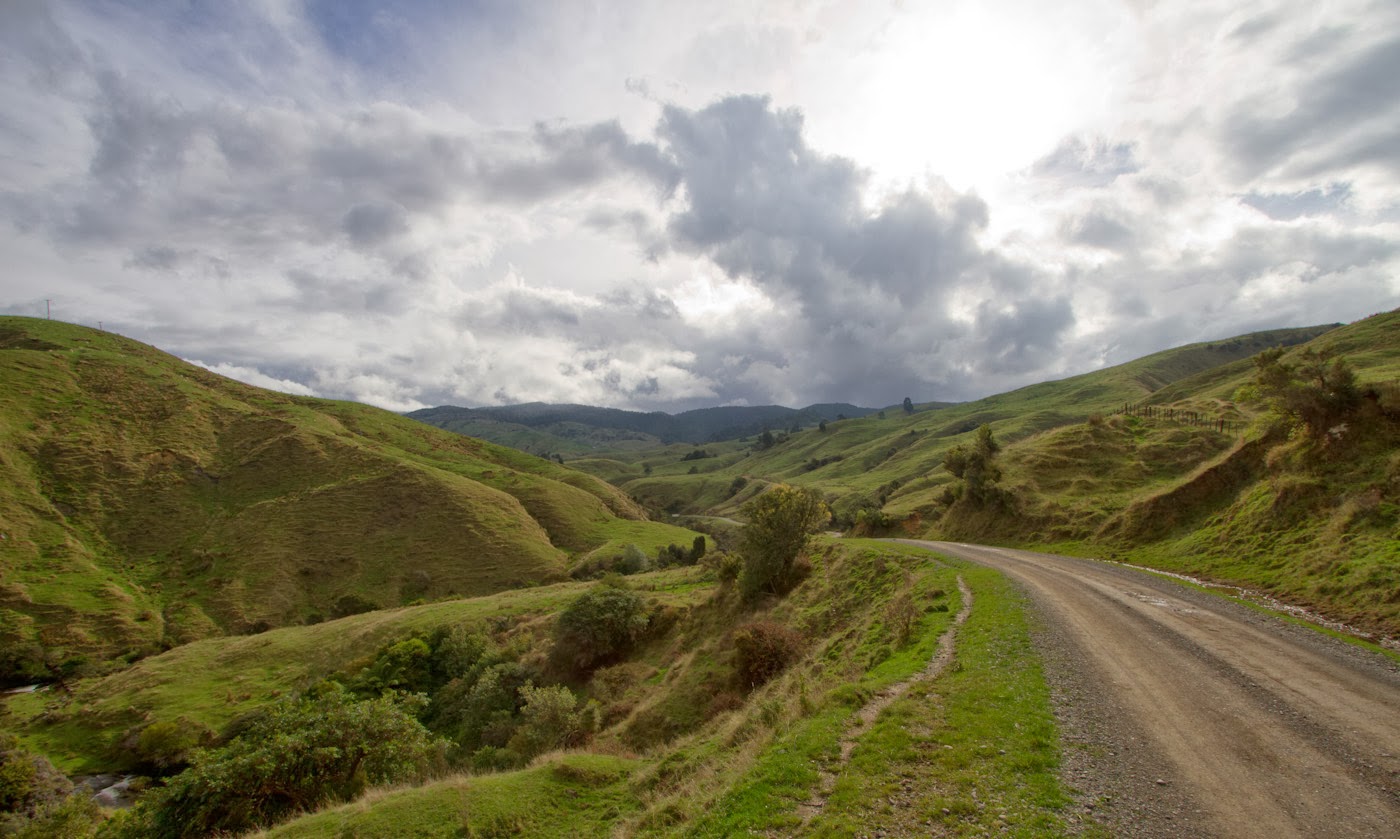 There was a promising line on the map that would save us some winding kilometers going up north west towards Lake Waikaremoana. We crossed this dirty river for the last time to follow the Erepeti Road, later the Ohuka Road (all dirt) and finally the to figure out that the intended road towards the west was pretty much not useable as it ran over private farmland and was more like a route than a road. Nevertheless the landscape for the first time on NI became more eye-pleasing. But it was still far from eye candy…

We drove up the Waikaretaheke River towards Lake Waikaremoana. The river looked most attracting but based on JK it’s not worth a try. Still there might be fish in. The foliage was nicely autumn colored as it was during the last days. Autumn could really no longer be neglected or ignored; in addition the weather was cloudy with some sunny patches.

We reached the lake Waikaremoana. A lake that was very remote now in autumn, but might see considerable traffic in summer. We followed the dirt road around its winding east shore, passed a terrific water fall (Mokau Stream?) and continued the road curve by curve by curve – it was green bush left and right of the dirt road and very windy. 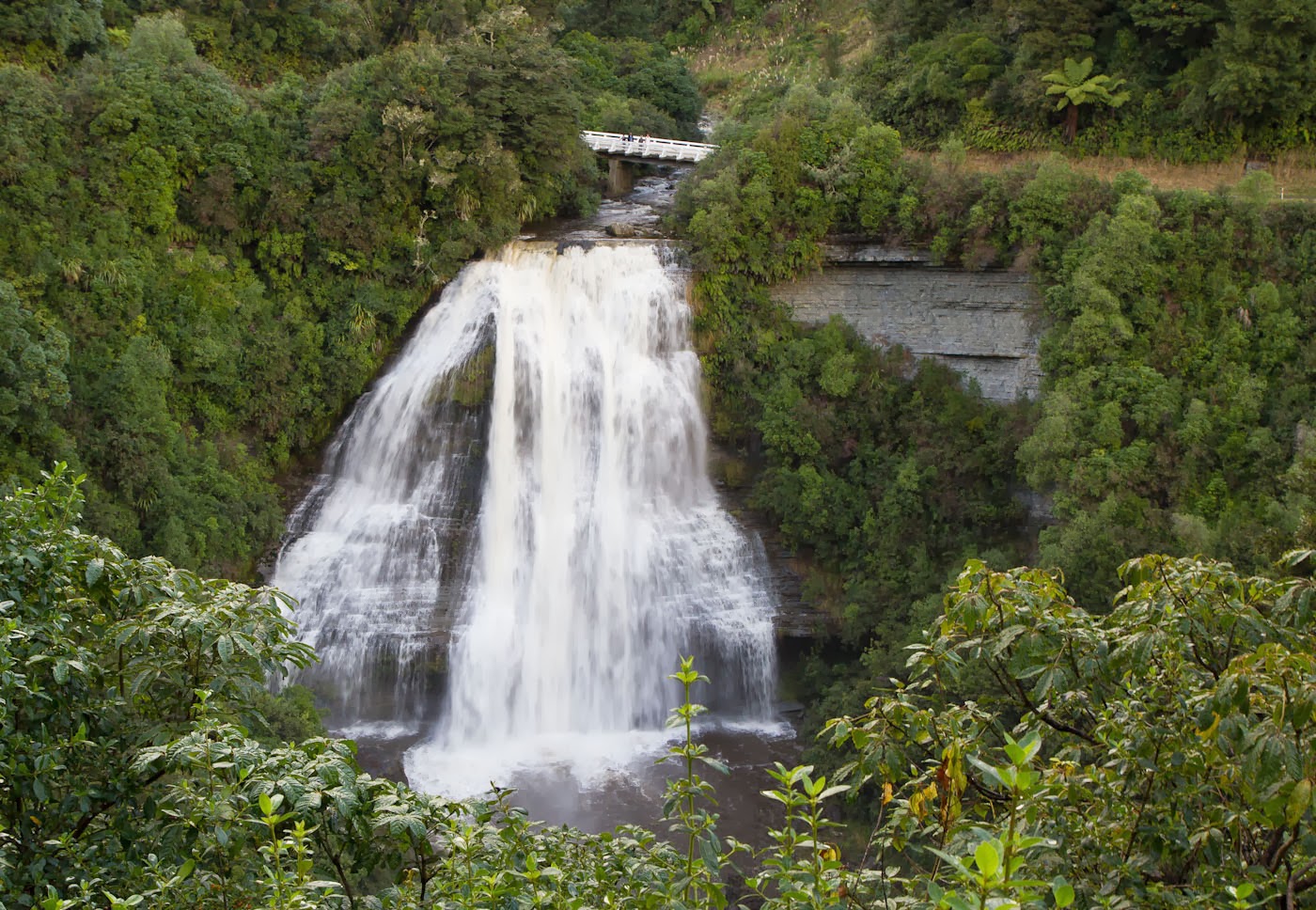 No unfortunately we did not camp close by in the campground but followed this dame northbound dirty snake in the bush called raod. All bush, nature – but I was sick of it. Tobias was rather noisy, my leg hurt from long hpurs of driving and I wanted to end this asap…. Fast fowrad, some hours later we passed a settlement in the middle of the bush, another hour later we passed the small village Murupara and had a stop there. I forgot why. We wanted to accomplish the last leg towards Rotorua where we arrived well after dark. After some research and search we found a decent motel right on the main road. We had a simple dinner and took a late night family dip in the hot spa on our porch.

The Lake Waikaremoana and the surrounding Urewera NP might definitely have some appeal. At that day it was just pain in the ass, as there was no option to fish and the landscape nature was ok but by far not new or impressing (besides the water fall that I really liked).

Rotorua is famous for its hundreds of fumaroles, geysers and hot springs. The village is based on tourism. Nothing more nothing less. The close by lake is just a lake. The geyser areas around are all pretty much similar, if you have seen one you have seen all. We chose the Wai-O-Tapu Thermal Wonderland. We walked all the accessible tracks there and where deeply impressed by a group of ladies which where fishing for gas bubbles that did rise from the base of one of the largest hot springs. This looked even more contemplating than carp fishing. It might be the next trend sport after extreme-GT-blanking (freely adopted from “Only the river knows”). Ok serious now: The Thermal wonderland is ok, but you might possibly be disappointed after you have seen Yellowstone. 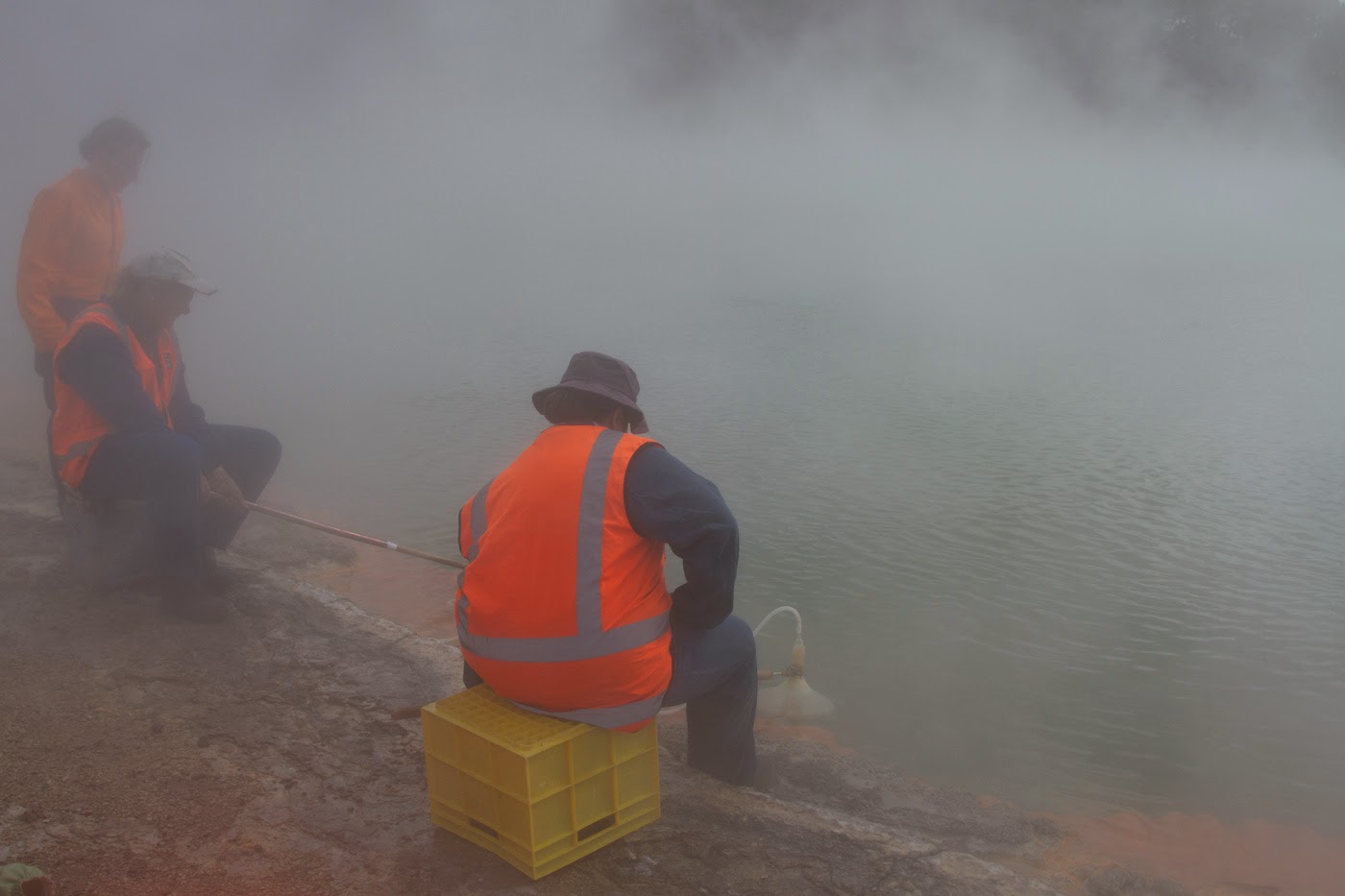 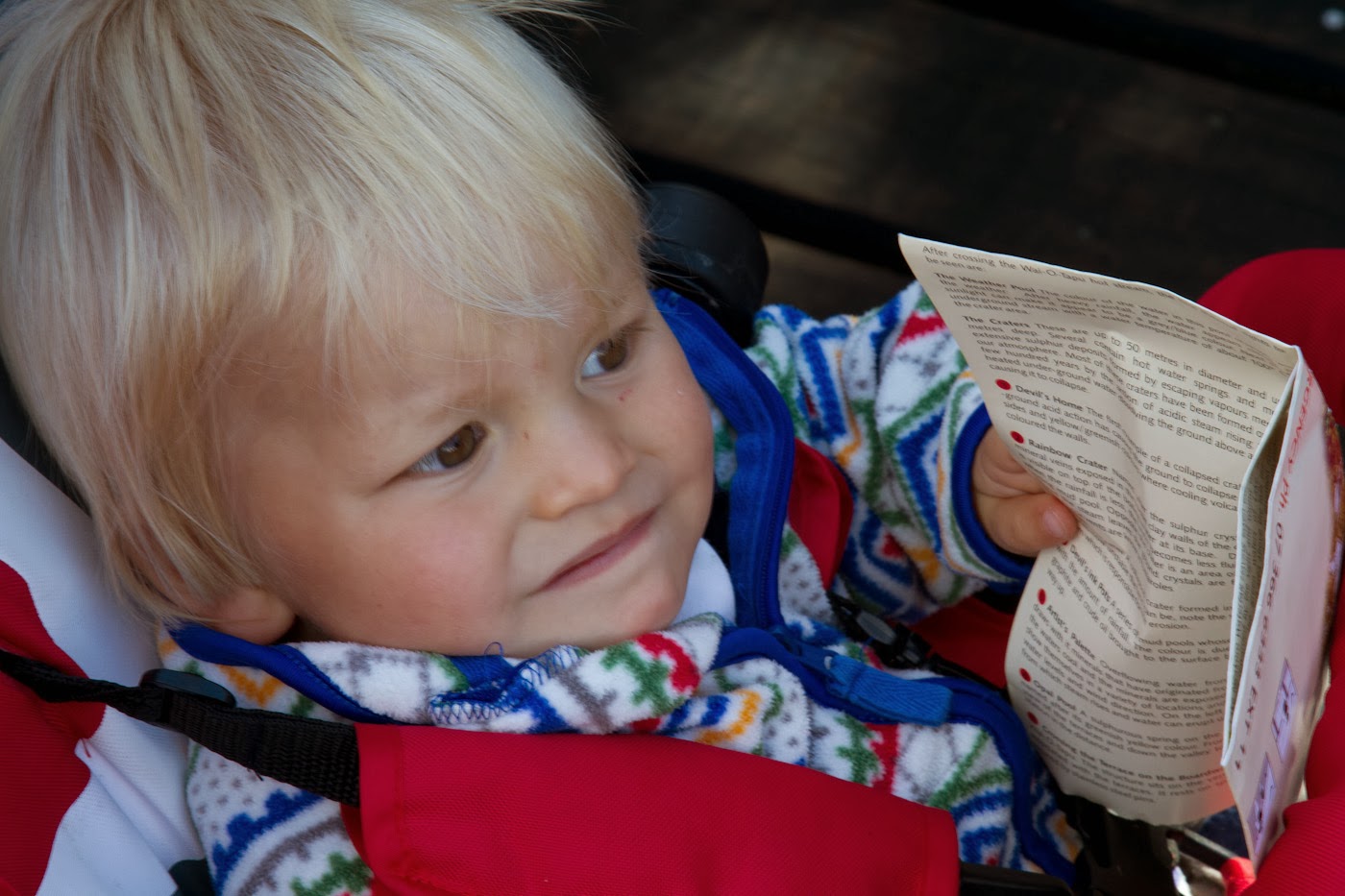 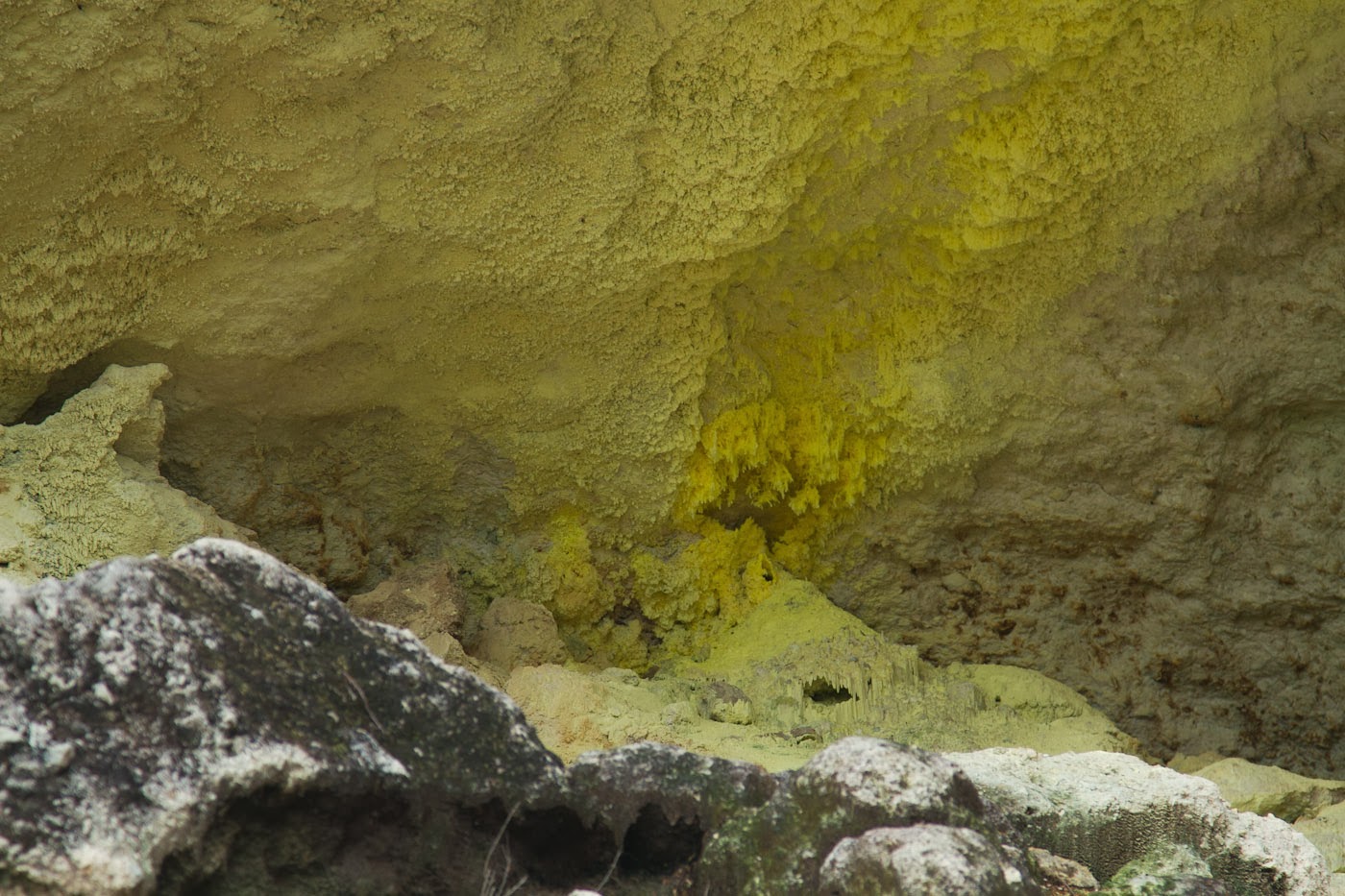 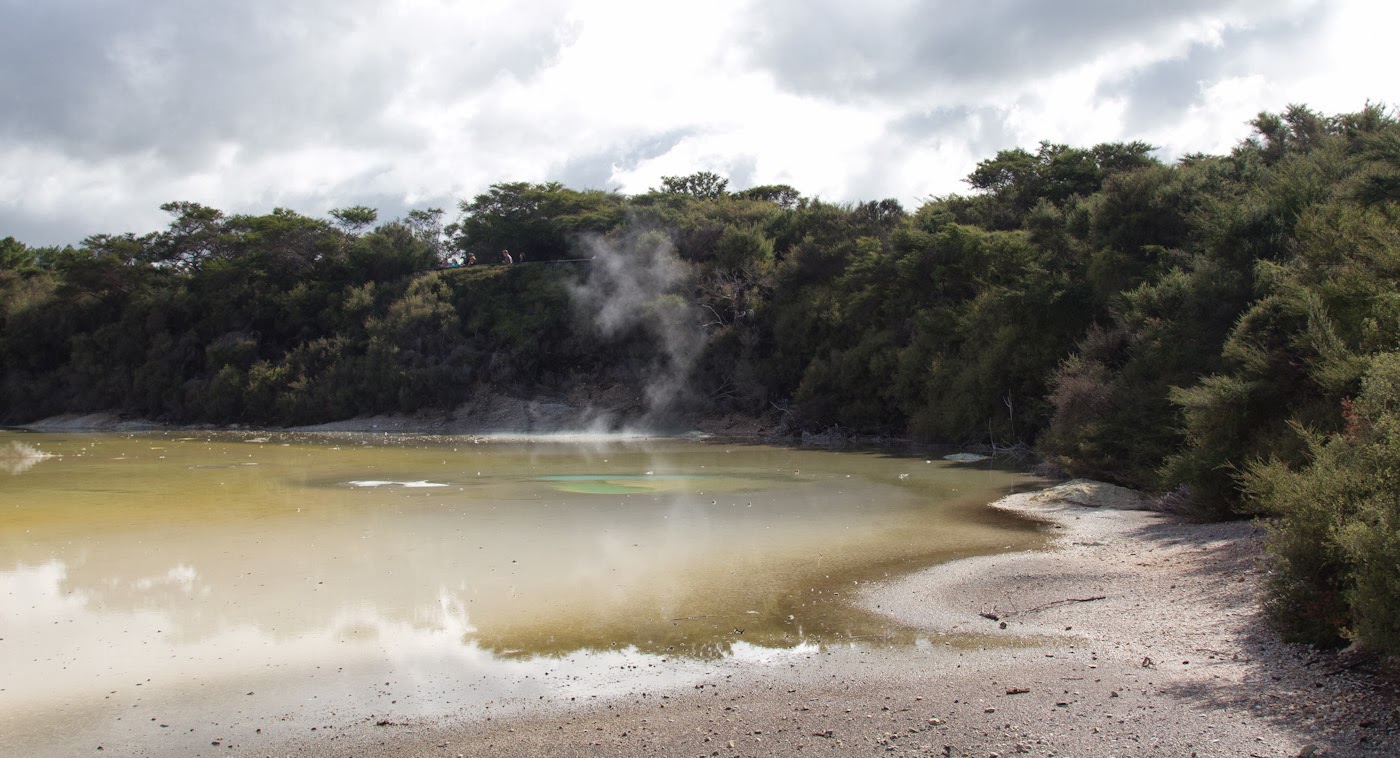 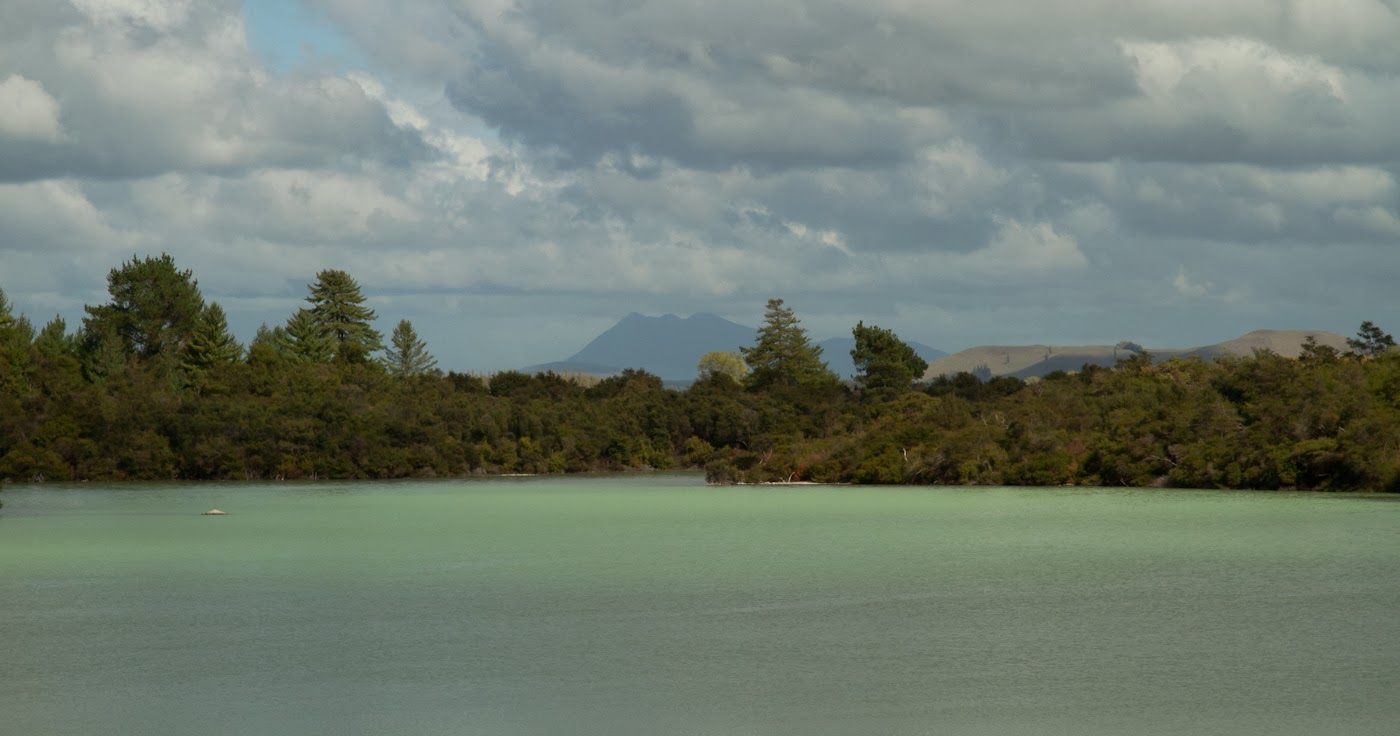 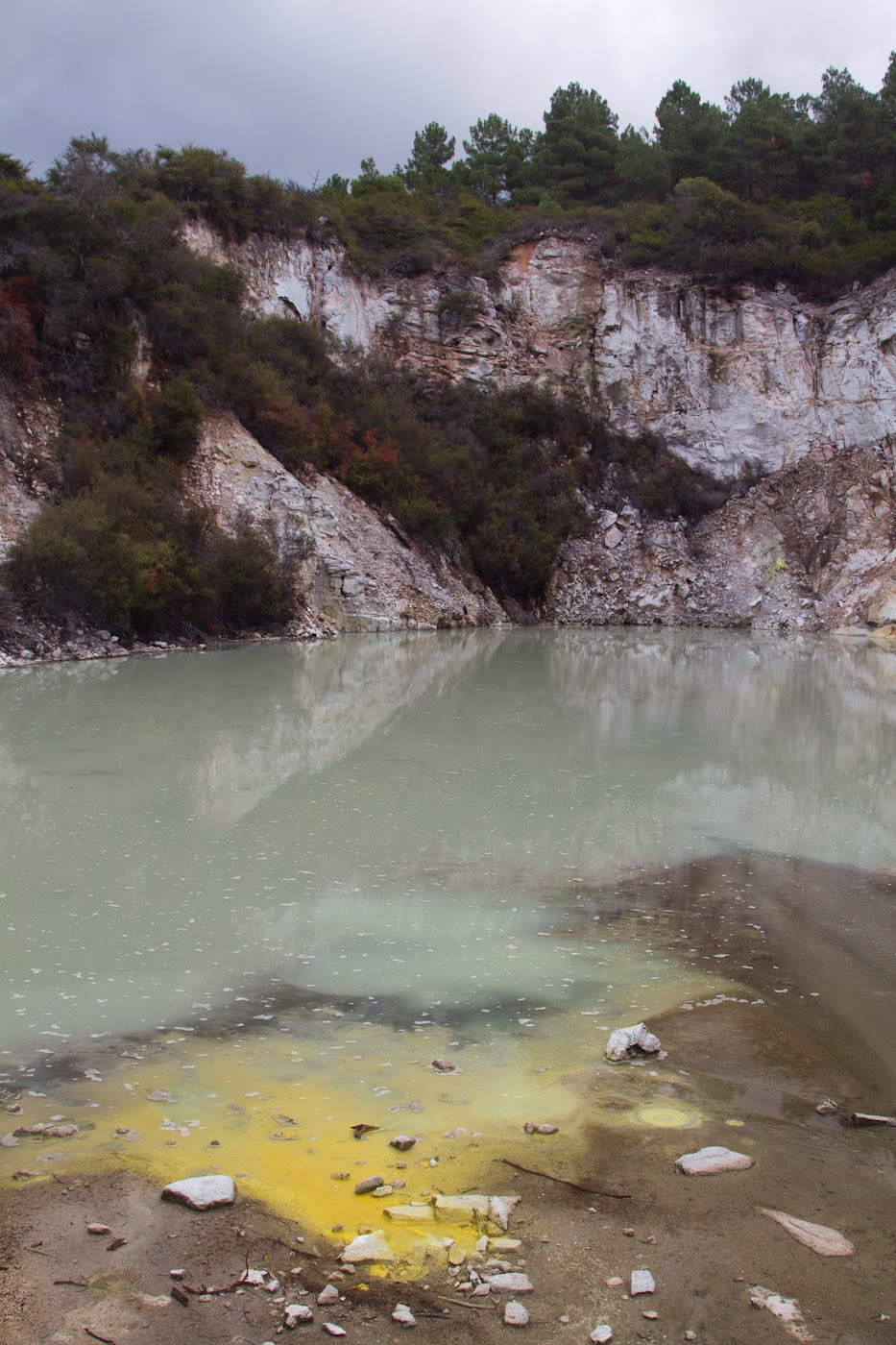 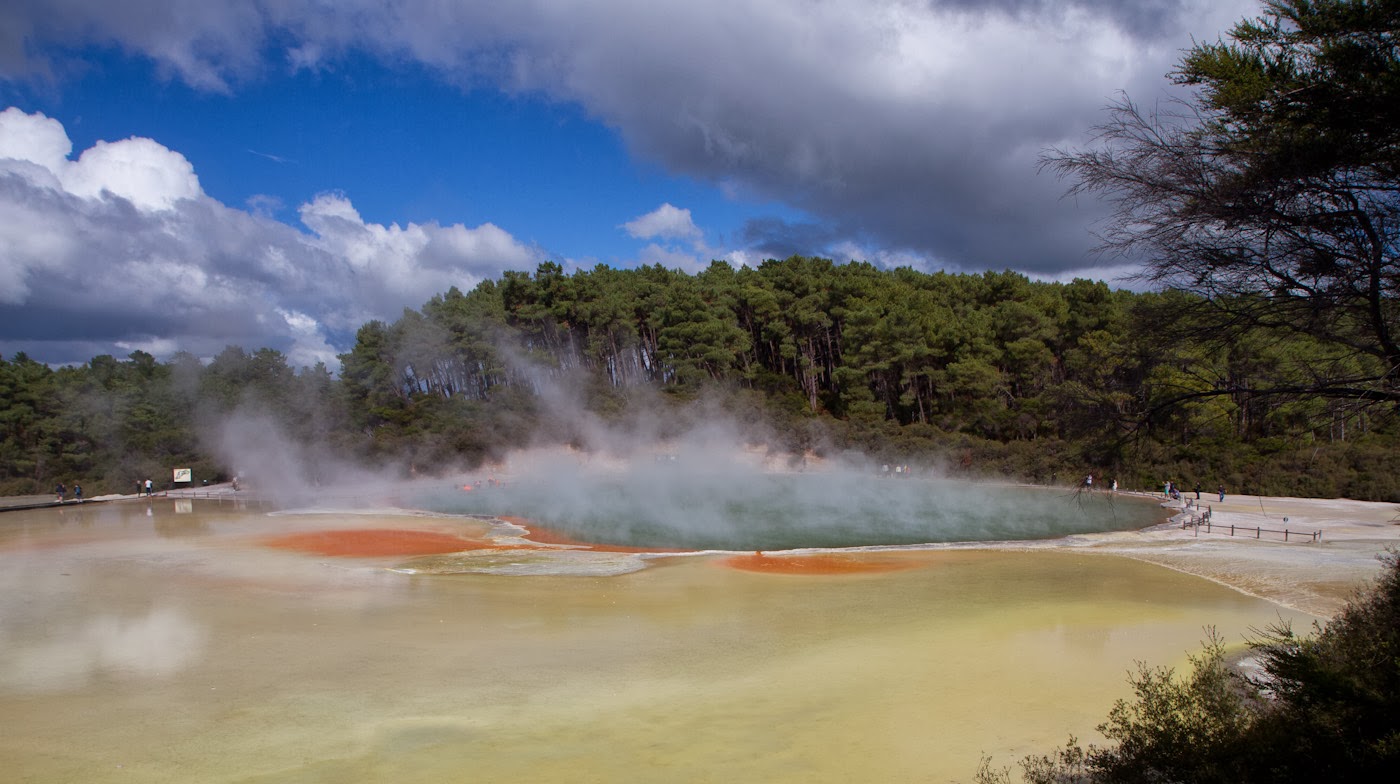 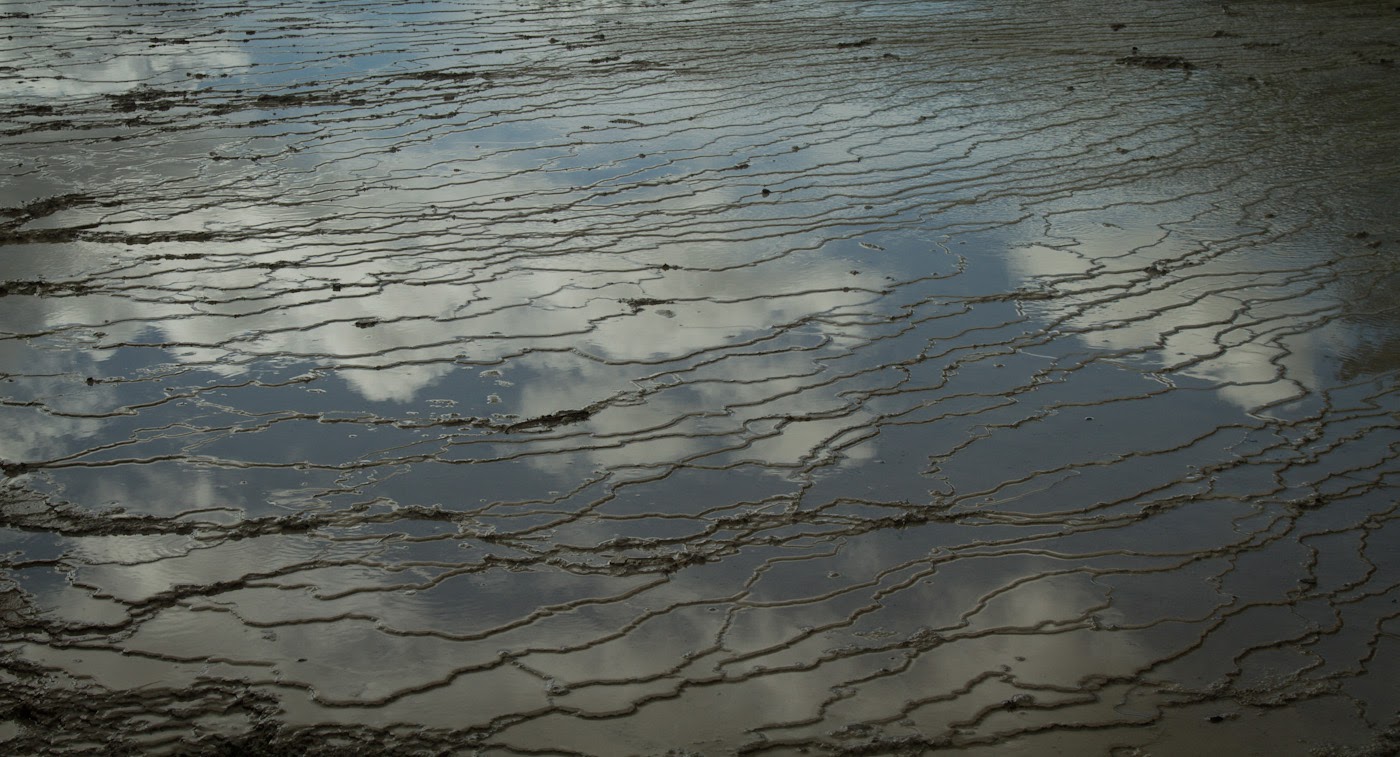 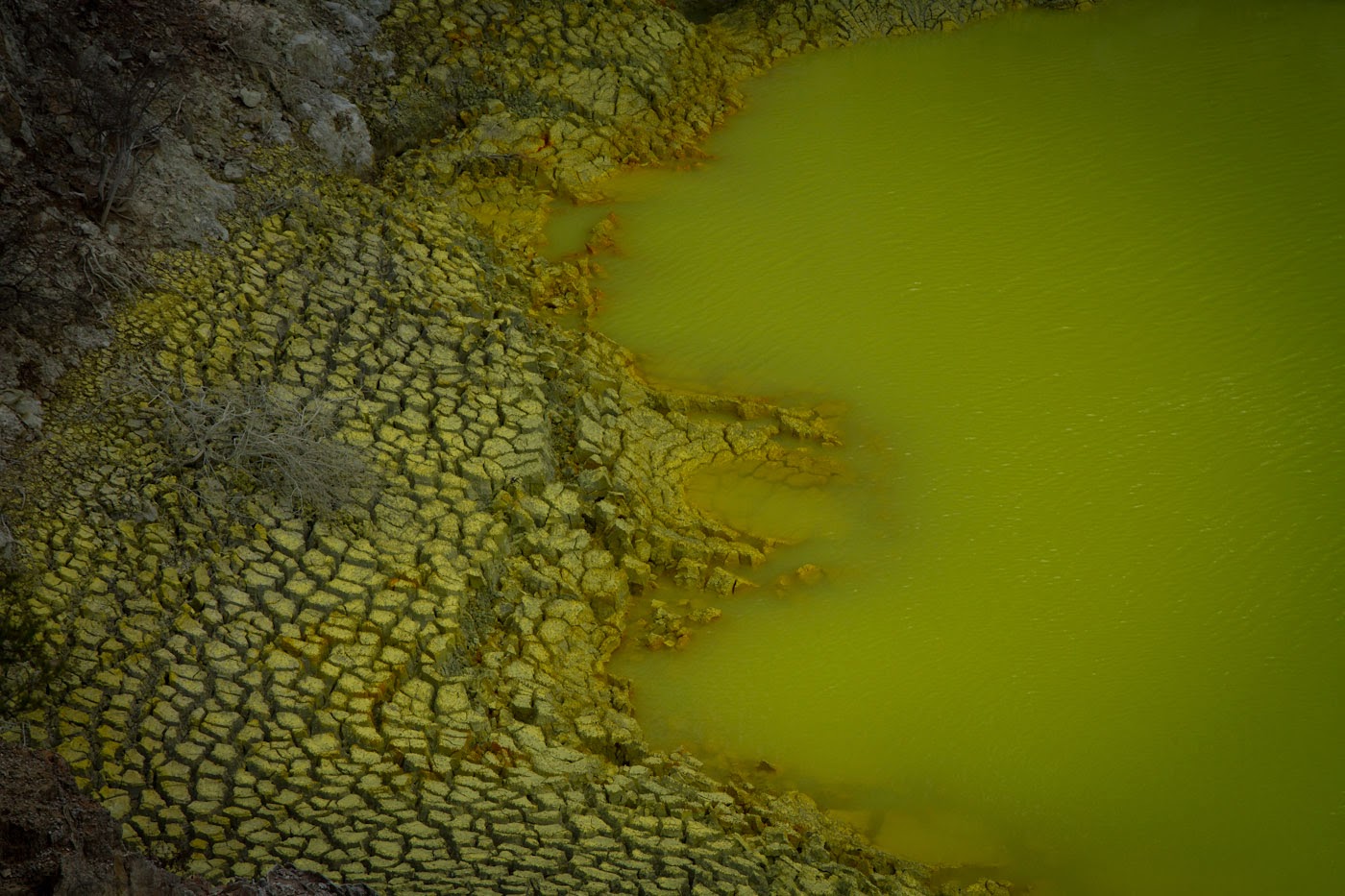 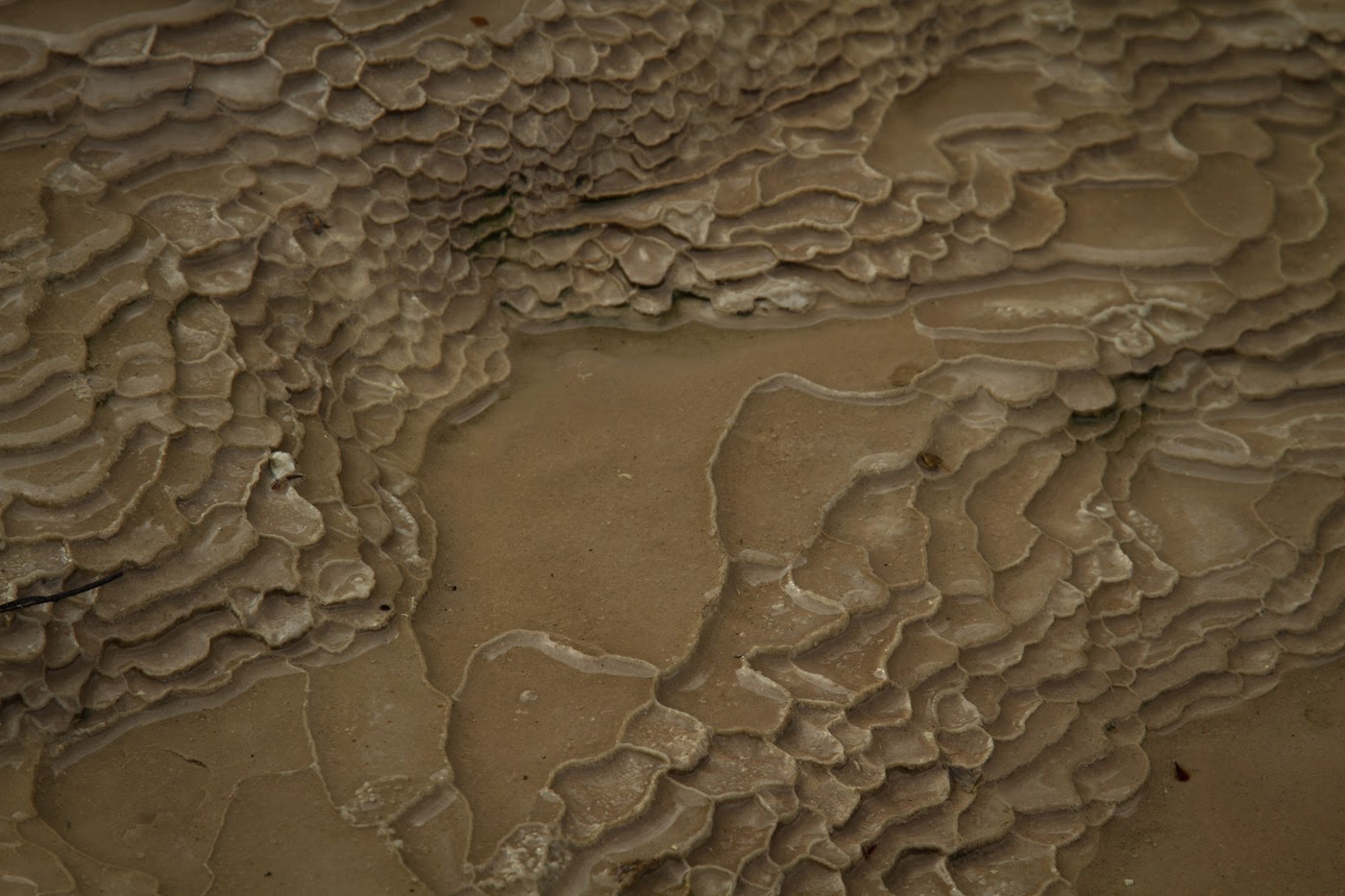 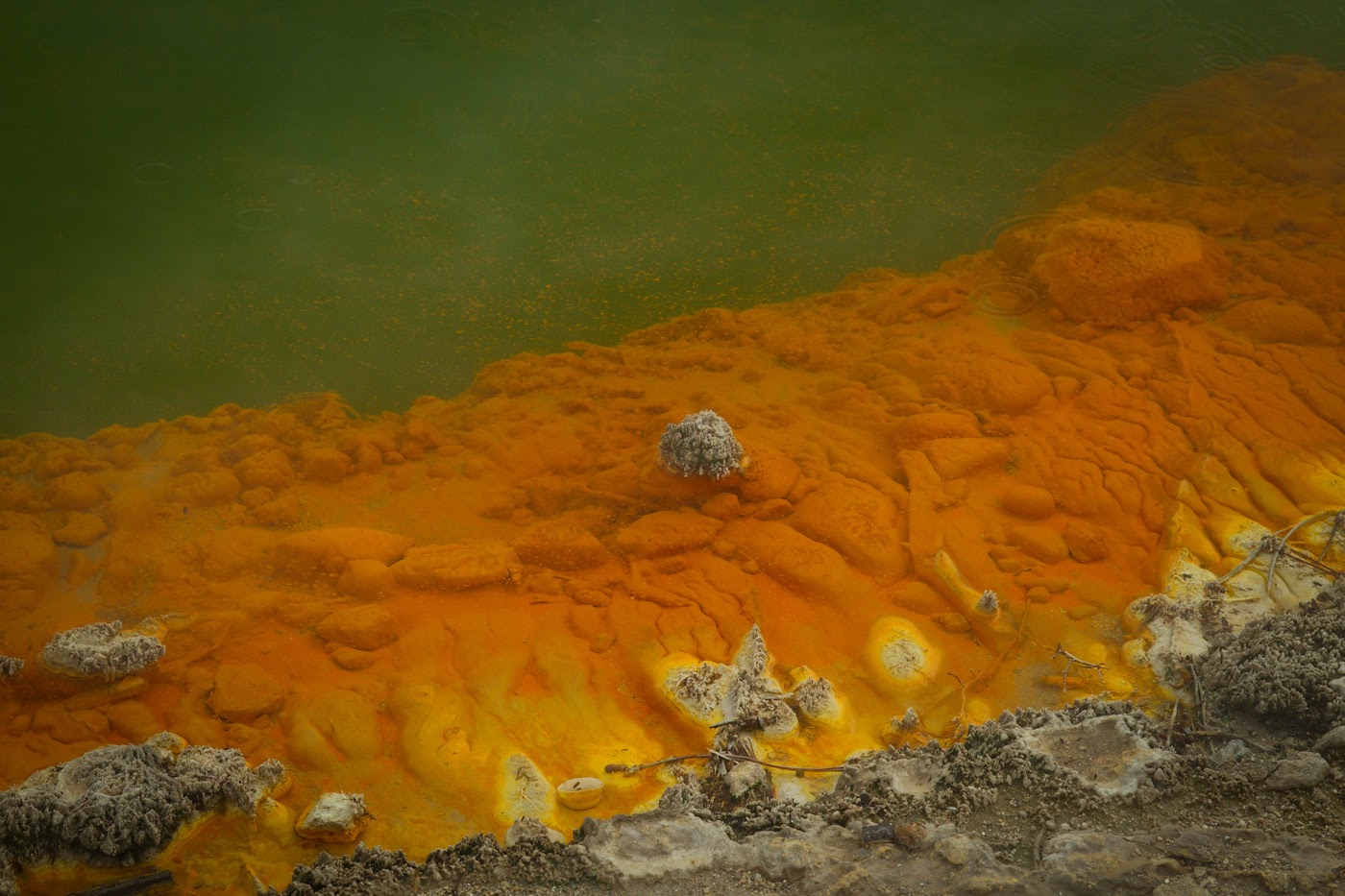 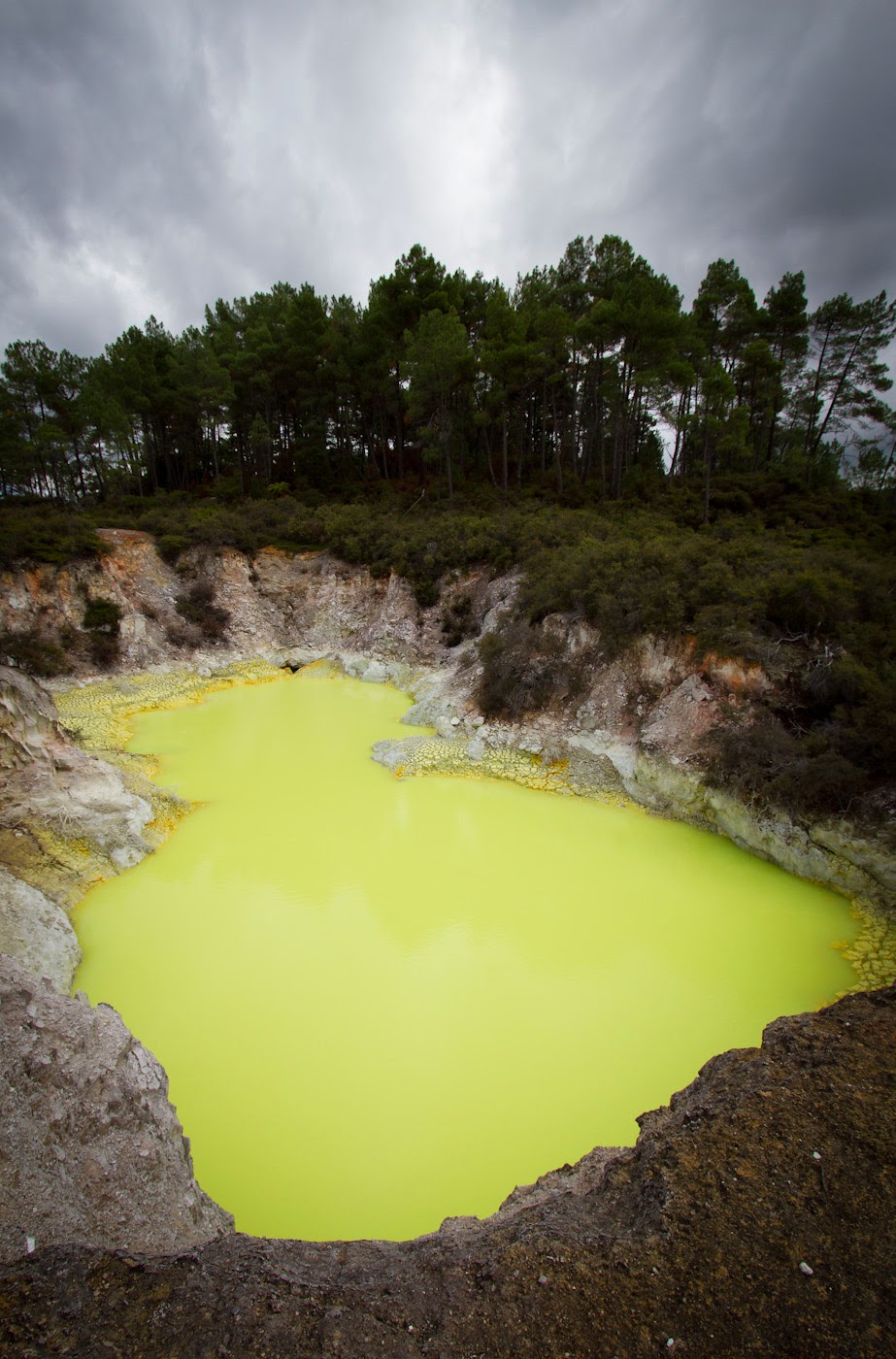 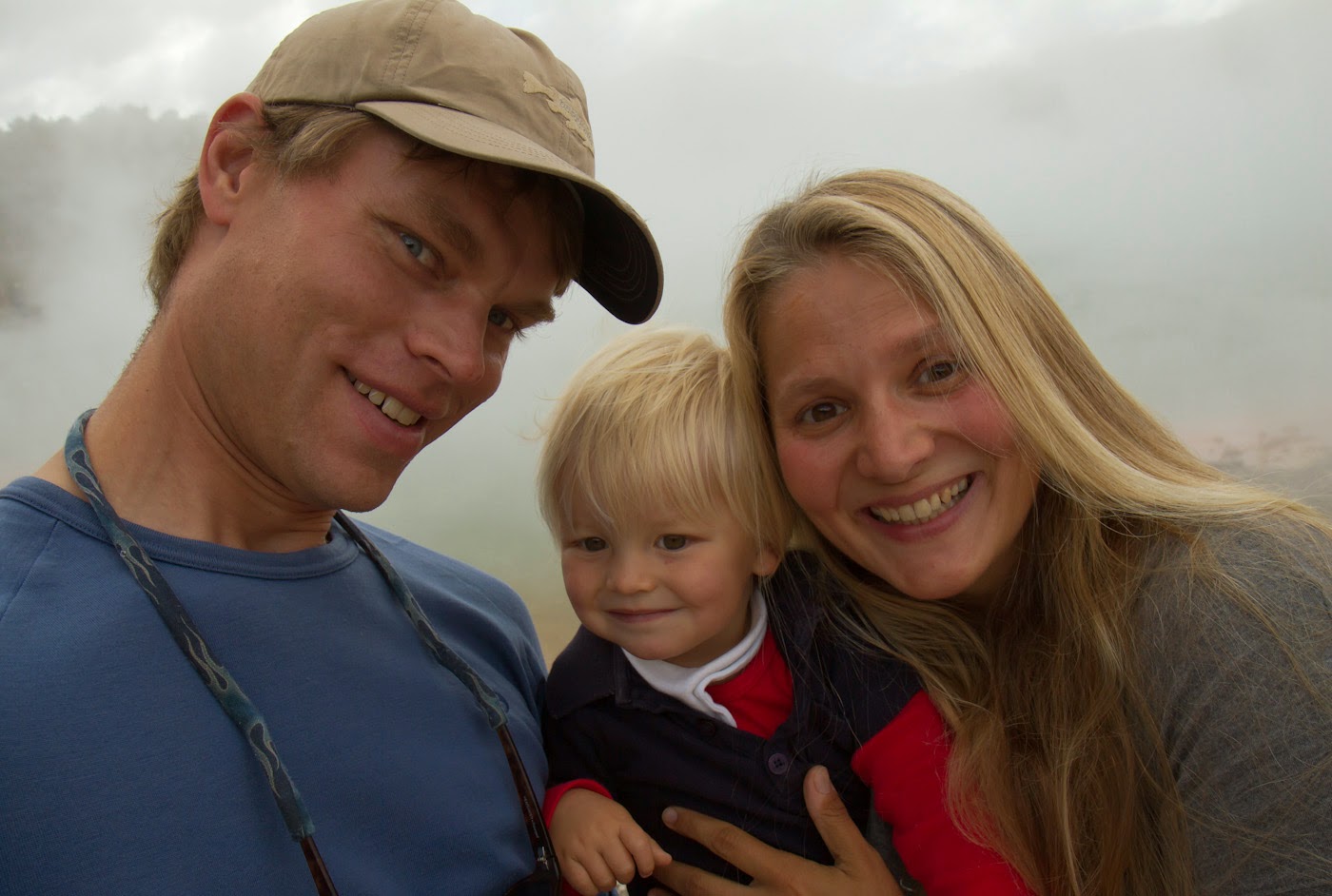 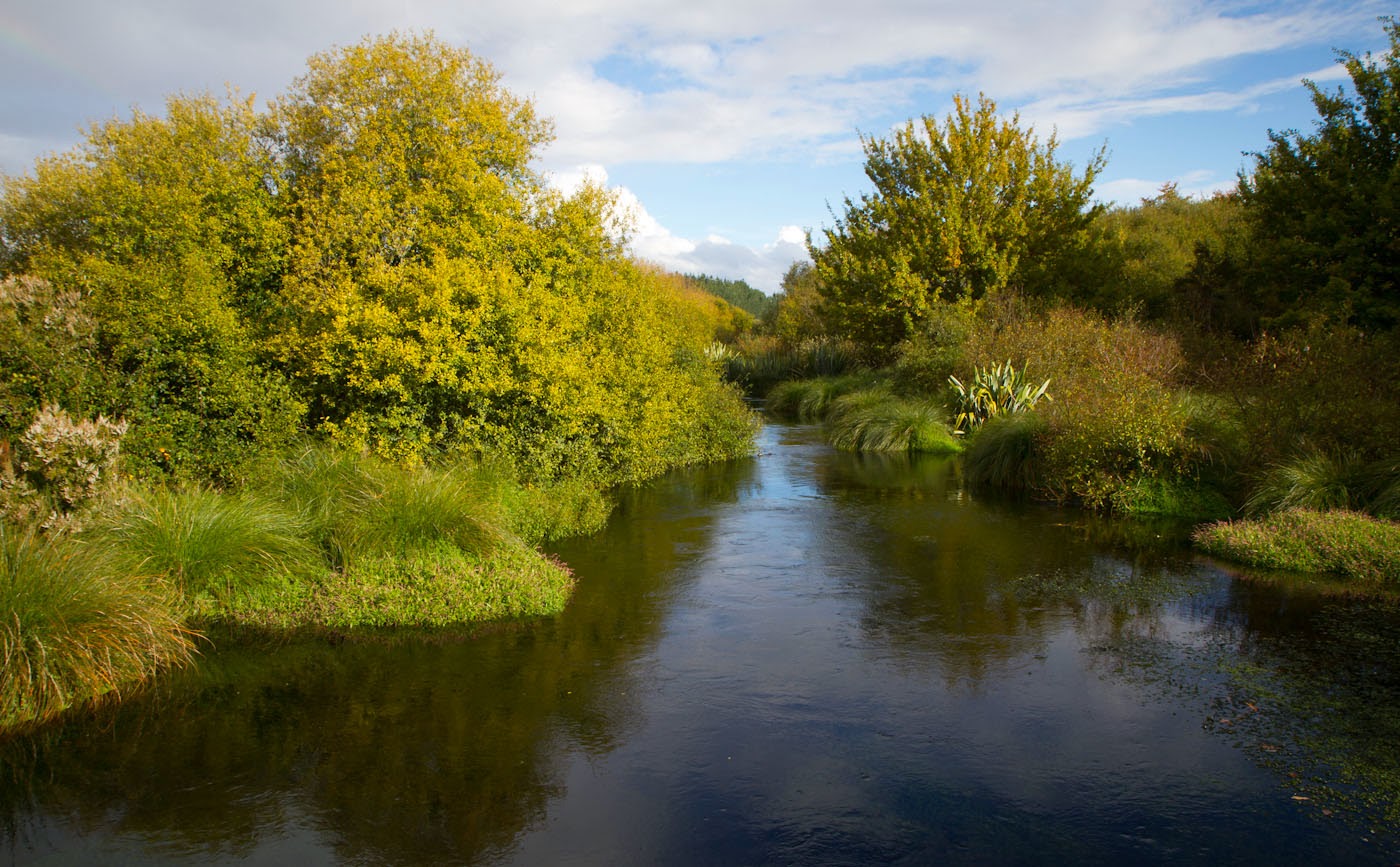 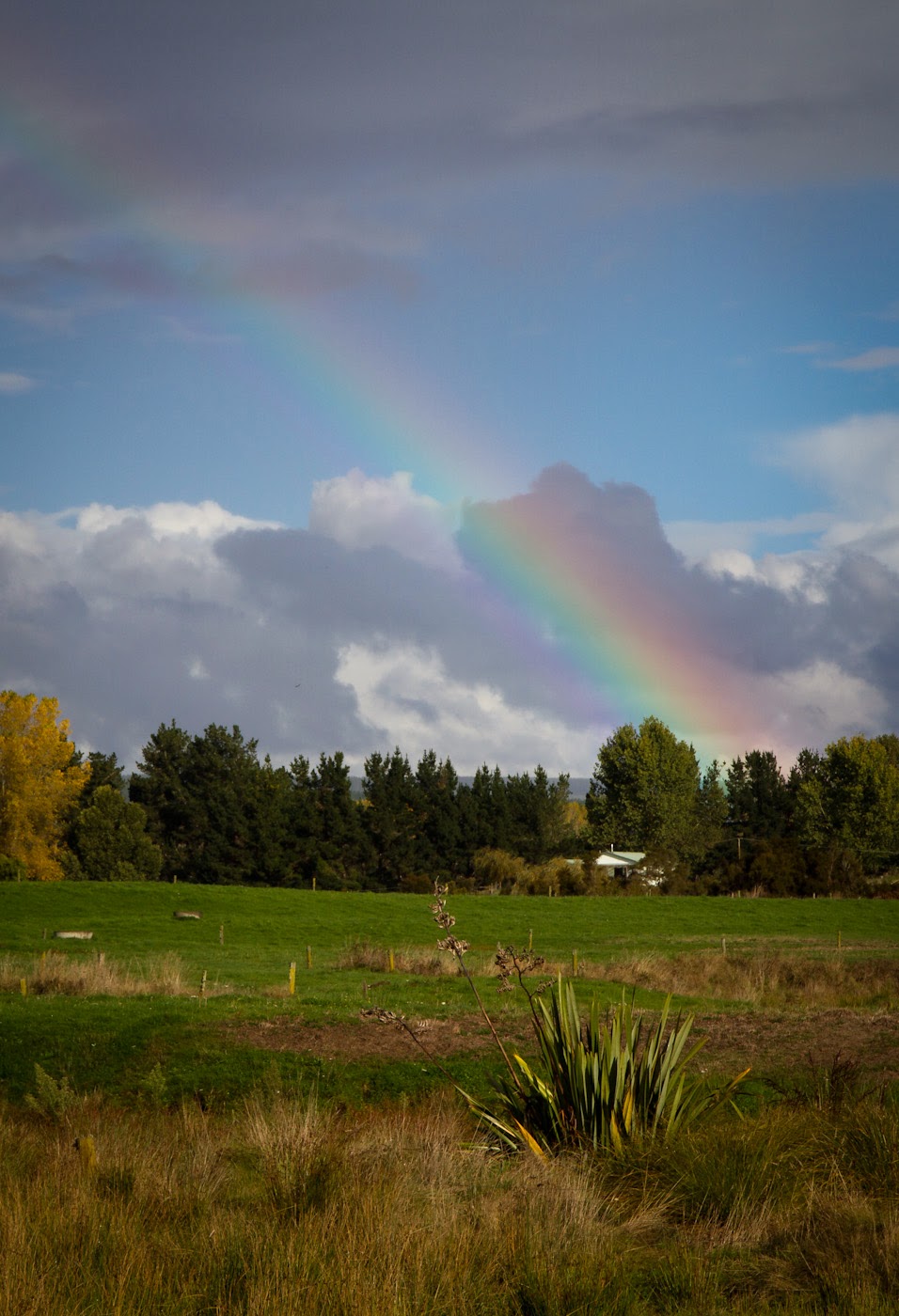 After that touristic program we drove a couple of kilometers south west towards one of the Broadlands spring creeks close by. Before the fly fishing reader gets a stroke due to excitement: these creeks are very very difficult to access. We reached a bridge over one of the creeks I figured out, at least to have a look at. A perfect stretch of water, weeds, eddies and some room for the back cast due to the crossing street. I had to rig my rod and have a go right away standing on the street. It took a while and a few casts till one of the rising fish came to my adams. Ines helped to net it from the steep bank. Just a small rainbow (?) of something around 2-3lbs. Nice! There was another fish rising around +18meters upstream right in a narrow section of the creek close to a willow bush. I was fixed and could not move as the bank was too steep/swampy. I did cast again and gain but always there where two meters or precision missing. All the time watching if a truck was approaching on the road that I would have caught on the back-cast. Several casts later I got a rise from the targeted fish but it did not stick to the fly… A nice intermezzo on this creek with a nice rainbow on the sky and one on the fly. Tobias was sleeping during the fishing in the Prado and slowly woke up so we drove back towards Rotorua. There we had an afternoon cappuccino on the playground right on the lake and another night in the terrific motel.

The next day I wanted to catch the last fish of the trip and headed back towards the spring creek area from the day before. Actually these Broadland Creeks are much closer towards Lake Taupo than to Lake Rotorua. Parked on the road close to the first creek I wanted to give a try and crossed over the paddocks towards the mouth of the creek on the Waikato river. I started fishing right on the mouth and walked out on the bank just to get stuck in the gumbo. Quickly sinking in the dirt up to the knees, I could just get out and back to the bank. Mmm I should be more carefully on the next try. There were several rather small fish laying in the current. It was rather obvious that these pre-spawning trout would be hard to entice. After a couple of minutes a man came through the bushes and thorns with his fighting dog wearing a muzzle on a short leash. We had a friendly conversation about the creek. He was a Scotsman who relocated some years ago. His strong accent was obvious. It turned out that he did not only fly fish the creek but once in a while would use a threadline. I did not understand the reason to fish a spring creek C&R with a spinner or spoon. But after fishing and thorn bashing this creek, loosing and recovering my net in the thorns I got the point that fishing this creek is a challenge (there is a cut track on the right bank some meters away from the creek that ends around thirty meters away from the road, thus access from the mouse and then crossing might be the best option to fish it). Very limited casting space, thorns and at that time fish that were just not interested. I fished / walked up to the road and left the place without a fish to my hands. The water was rather low but still silty due to irrigation.

After a brief detour via another spring creeks mouth (again very limited access due to private land), I relocated to the spring creek from the day before. Again I had a few casts on the road-pool from the day before but the good fish rising was just out of my reach. After some consideration back and force I tried a couple of times to wade the creek – but right beside the firm bank it was very deep (+1,8 meters) and I would be immediately at maximum wading depth. Combined with current, rather swampy ground and vertical banks of 1,5 meters wading was no real option. Every time I tried to get out of the creek testing its wade ability my hands got some additional cuts from the rough grass. So I crossed the paddocks to follow the creek further upstream to a piece of water that looked accessible based on google satellite images. It was semi accessible: again high or rather swampy bank.

To my surprise I pretty much instantly spotted a fish and did not spook it. Must have tried and Adams or a Royal Coachman. The fish came and after a while it came to the net. A Rainbow of around 3lbs. I knew that this fish would pretty likely be the last fish of the trip. At least the last fish was caught on NI. A few more casts to irregular rising fish in the distance but nothing more.

For the last time of this trip I turned around and walked back over the paddocks, crossed the fences, reached the car, disassembled the rod, got out of my wading gear and left the creek behind me.

The fly fishing end of this terrific trip! 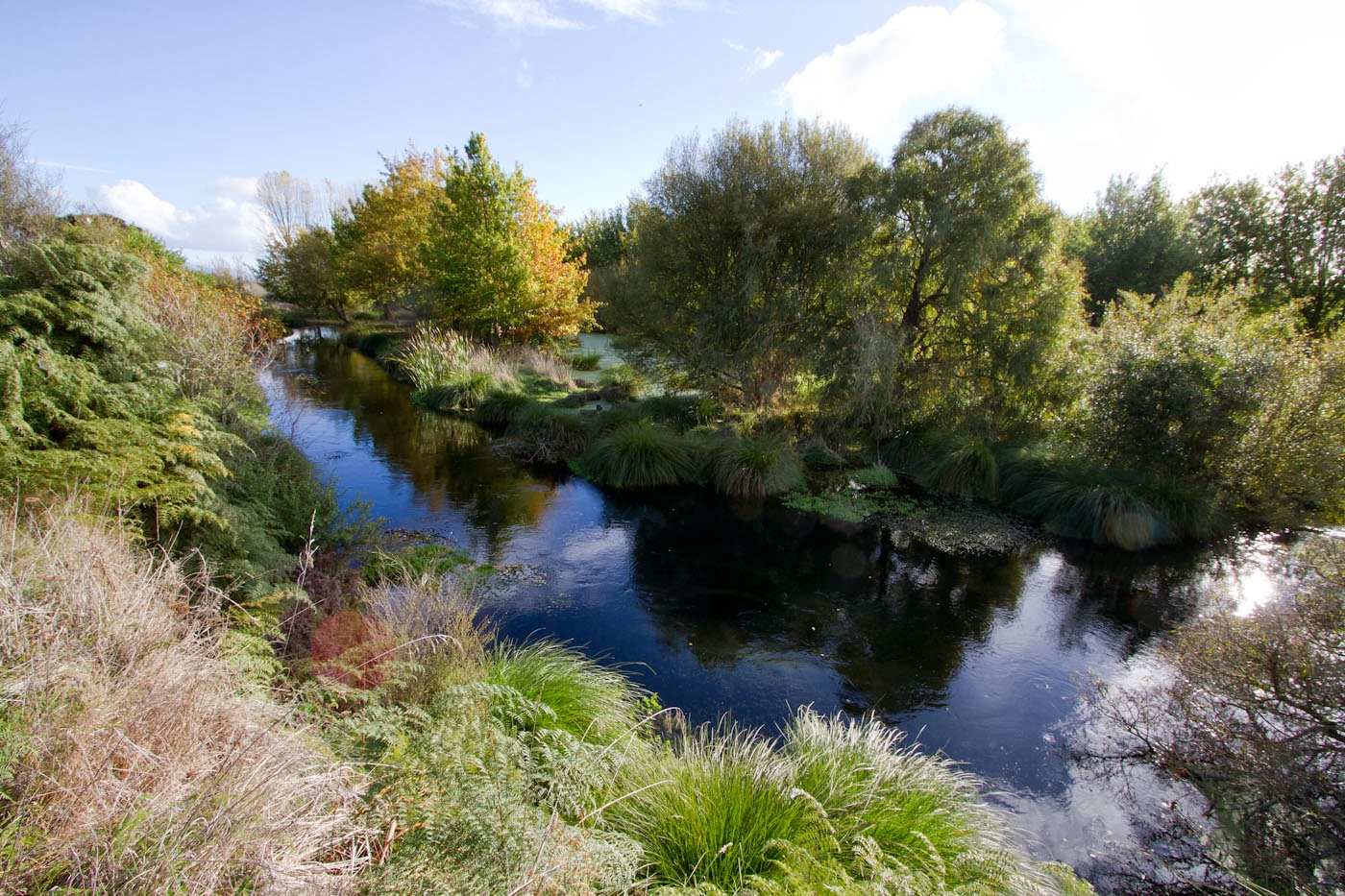