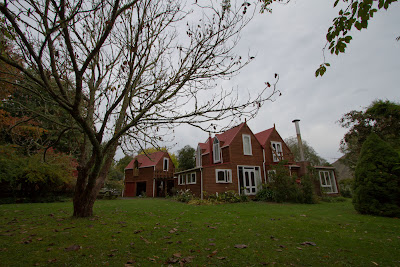 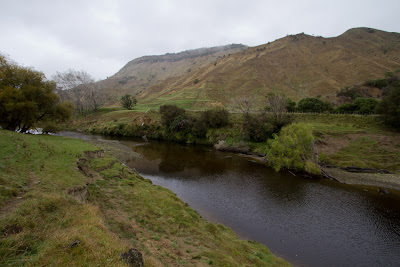 During the last days part of the NI got a good share of rain, so did the Ruakituri valley. The river was rather high but still fishable. The weather forecast during the rather unstable last weeks pretty much changed every day, thus a prognosis of some rain could mean sever rain and flooded rivers or sunshine and no rain at all. Besides that the prognosis for following days was altered pretty much daily. We finally did not give too much about the forecast at all. The rain was supposed to be ok for the next days with only minor rainfall. After a good and quiet first night in the wooden castle I headed off to fish the river. Ines and Tobias stayed in the castle to have a relaxed day. It was raining very slightly once in a while, more like a drizzle or spell. I checked the first access a few kilometers upstream and was just shocked: what was that kind of river?! Dirty, colored looking, foam lines from stock runoff, grey sandy slimy rocks – to be honest I did absolutely not like what I saw. After fishing pristine clear rivers for month down south, this contrast was even worse than expected. I considered my options (accept it or leave) and my again increasing fish fever. The best bet would be to drive as far upstream as possible and to start there.

I did exactly that and drove up to the last station in the valley. Asking for permission at the station to fish up from their property towards the bush and towards the National Park. A couple of hundred meters below a place called Lockwood the river showed a small rapid/step with faster flowing water. Despite of the tea stained water I spotted a fish from the car. So I set up my rod and crossed over the current well down below to have a go. Crossing was funny as estimating the depth was hard with this river coloration. The stones where much more slippery than in the Bolivian jungle where felt and studs are recommended. Did I catch a fish in that run? Might be I can’t remember, I think so, but it was a small one. Blind fishing was not my preferred way so I still tried to cast to sported fish. Hard business because spotting them was most of the time not before I was very close up. The river showed long deep runs with the odd pool/riffle structure in between. Further upstream these riffles became more frequent thus providing more opportunities to fish for structure. To my surprise I hooked fish fishing a chunky rubber legged size 10 or 12 dark brownish nymph. The hooked fish were stunning because of their strength and fighting habit, airtime, long powerful runs. My laziness in terms of seldom running behind the fish (it just looks so bizarre) did not pay now. I lost these eager crazy fighters of something around 4 to +5lbs more or less close to the net most of the time – my fault, the leader did not break, just the (barbless) fly came out under tension. So to land fish here it might be better to follow the wild running trout once in a while. Ruakituri trout are very well known for their strength and you might lose a high share of fish there. Finally I managed to land one fish – or the fish landed himself. Fishing a riffle where there river was just a couple of meters wide, I hooked one on the far side of the main current that pretty much motor-boated itself within seconds over the main current right to my feed. I just picked the net and netted it. A dark thick brown of something around 4lbs. I was laughing out very loud. What a crazy take and landing. A not sharp picture and off it went… 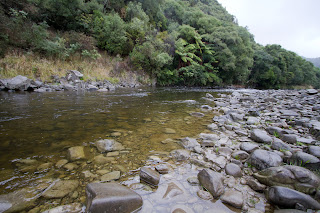 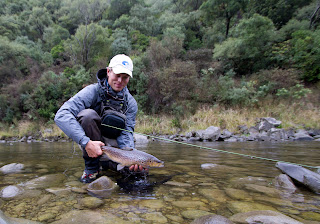 After some more casts I turned around to walk back to the car following some sheep tracks and finally a farm track up high on the bank. I did not see or hook any of the legendary big Ruaki trout but the fishing was ok and crazy at times. Five decent fish hooked for the half day actually fished. All on nymph semi-blind. Further up the river, closer to the National Park and beyond the falls the river is said to gain and it might even be clearer after a longer period of sun. Might be. But this river did not appeal me enough to put it on the list for future excursions. 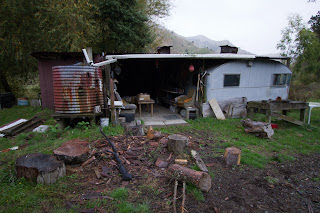 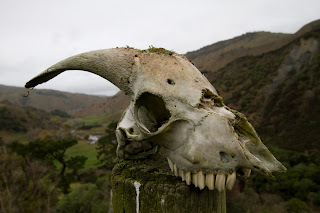 Driving back to the family the rain started. I was lucky because during the afternoon fishing there was close to no rain at all. I felt sorry for Ines and Tobias staying close to the castle all the day. For the next day I proposed to do some family excursion. Family wise this was the right proposal, fishing and weather wise it was the worst decision. But step by step. 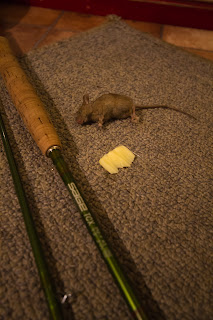 Before I turn to the family day here is an anecdote of the second evening at the castle. Ines saw a small mouse in the kitchen, so I intended to catch and kill it. I prepared a trap with a half water filled pot, a board up the pot and some bait hanging just in the middle of the water filled pot. So in case the mouse wanted to reach the bait – edam cheese – she would have to reach far, lean over and probably fall in the water. The bait was attached to a meter of 8lbs leader and the lower half of my fishing rod. Later that evening I saw the mouse running under the oven. I picked the rod with the cheese and placed the cheese a few centimeters before the oven. It took less than a minute and the nosy mouse came out and tried to grab the cheese. Thus I tried to lead her up the ramp to the deadly mouse pool – the mouse was just centimeters before the deadly ledge – she became suspicious and turned around. Not fainthearted I reconsidered my plans and wanted to have quick success: next try I lead here out to the piece of carpet at the entrance door that was right there and it needed just one or two well-placed beats with the rod and the mouse was dead. I was slightly disappointed that this hunt was already over. In my mind I already had some pictures of a hook with some cheese and a decent mouse fight.

This was the only rod-induced kill during the whole time in NZ!

Next day we drove to some off the beaten track hot springs / hot pools around 1 ¼ hours away to the east. Pastoral land all over, some hills, not bad but not ‘attractive’. With some of these remote settlements we asked our self if we could live in such a remote place and what would we do. A bewildering thought. The hot pools were within one of the very last sections of all natural jungle forest which was typical for this eastern part of NI before the second run of settlers came (as first settlers I consider the Maori). This fascinating jungle was dense with fern trees – close to impassable. Mankind did deforest various landscapes e.g. parts of the Mediterranean coast to gain wood, Scotland to feed sheep, currently the rain forests all over the globe to feed the greed for soy and meat and some decades back large parts of New Zealand to feed humans and sheep.

We had an extended session in the hot pools at Morere Hot Springs with temperatures between something of around +30°C up to 40°C. Tobias loved it and even he reduced his movements in the hot water and always wanted to go to the cold pool of around 10°C to cool off. I love, that he loves water. He got used to water early by regular visits to the ‘baby swim lesson’ and the baby pool with Ines.

After this hot water soaking session we continued towards Gisborn to drive another way back than we did to go to the pools. Gisborn was again one of these villages where you can get lost searching a cup of cappuccino. We did so many turns trough the center that I was afraid to get caught over by the local police. Finally we ended up at a McCafe because of their ‘nice’ stinky indoor playground! (Some readers know how much I dislike McDonalds), as every other café was closed. Cafes in NZ most of the time close around 5pm and some even at 4pm. Funny thing – the time where we normally tend to go for a coffee the cafes close in NZ. But most of the shops (besides large supermarkets) close around 5pm. 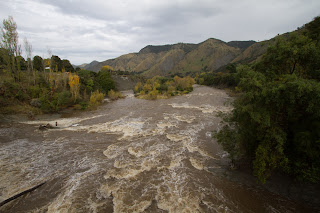 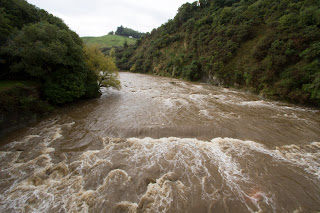 Going back to the castle we arrived again at dark. As we had a chimney in the living room (that was not lighted for some time) and the castle was rather cool we started a nice fire that provided some pleasure. Later that night the rain set in and it rained pretty much the whole night. Not the best situation for my plans to fish the other day. Getting up in the morning it was clear that the river was not fishable. It rose up to +95 cumecs and was dirty brown, it is fishable below something of 20 and good at around 6 cumecs, the spate it had the day we arrived was something around 30 cumecs. Thus we only had one option: leave this place as the river might need at least two days to come down again. Bad luck. We skipped the fourth and last paid night and the castle. The landlord aka owner did never answer to my very friendly request (it was more a proposal) to consider to transfer some money back for the not used fourth night. An impolite and unacceptable behavior. To sum it up: a highly regarded river, that runs tea colored or dirty most of the year, a very unattractive river valley and river structure, ‘Eco Retreat’ (spells: rotten & outdated) accommodation with mouse and cockroaches and a semi-friendly landlord. The best ingredients to avoid that place and to express it more explicit: this river. There is one other decent accommodation in the valley - some kind of fake lodge or upscale B&B. In case you stay there, hit the river at very good condition and combine this with a camp-out up beyond the falls - then you might have the basis for some good fishing days.

We left this valley and went north-west. 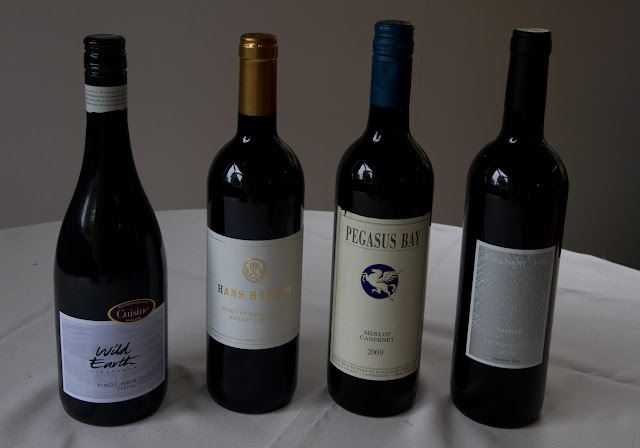