First day fishing. We split in two groups/boats with two fishing, one guide and two locals each and went upstream. Bicudas, Wolffish (Trairão), Peacock Bass, Matrinxa came to the fly. Most of them caught by midsized poppers with light, green, yellow, white coloration. Wire shock tippet all the time as most of them cut even thick nylon immediately. And the Piranha even cuts wire with ease. Fishing here always leads to surprise - you never know for sure from which species your fly is inhaled by and aggressive take, by an ultra-fast Bicuda, a vegetarian oriented Pacu that decides to add some meat to its food, by a big sudden hole in the water caused by a Wolffish or by a big jump of a Peacock - everything could and does happen. Exactly that variety is the fun thing, the various species provide constant change and distraction. 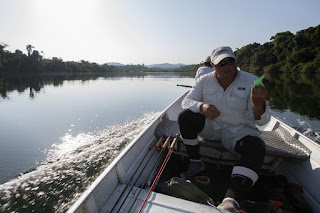 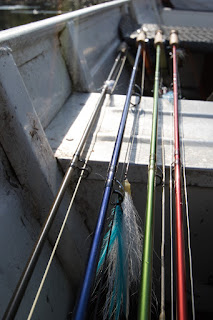 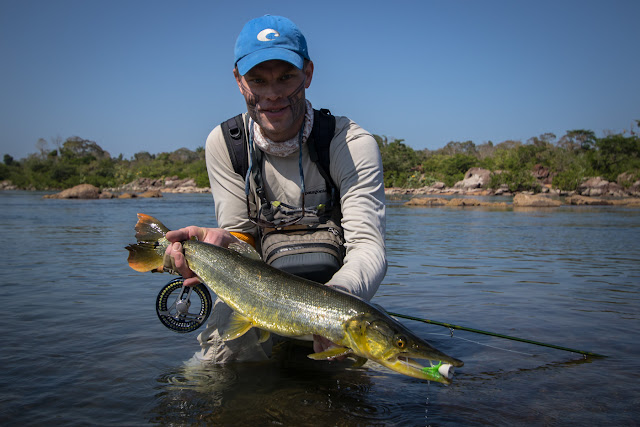 Fishing provided good action during the day. At noon we gathered at a spot on the river bank under trees providing shadow. A fire was set up to cook the assortment of fish for lunch. Side was rice … except for breakfast rice would be part of the regular dyed the next days. Hammocks hang in the trees and we could have a rest from the strenuous fish fighting or from wandering around at the river. 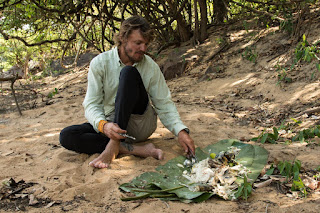 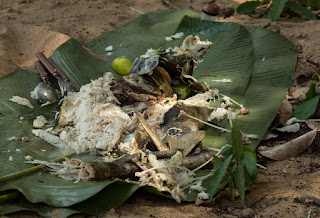 During the whole week the jungle was surprisingly friendly to us. As the season was the dry season or as the Kayapó call it the "good weather" we had warm to hot days but cool nights. Close to no midges bothered us at night and during the day, still long clothes and repellant against sun and insects at night and in the morning is strictly mandatory.

We did not see any bullet ants or any snakes and the sting rays are easy to see and to avoid. Bees or wasps were not an issue. Still every step or grip should be done consciousness to avoid unpleasant experiences. And medical needs should be considered with adequate supply as help is at least one day away. 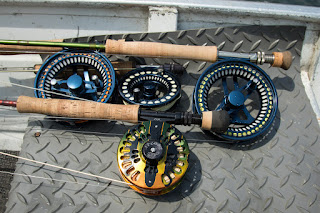 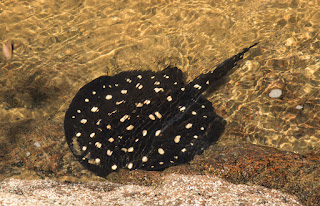 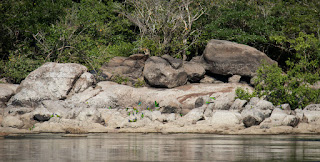 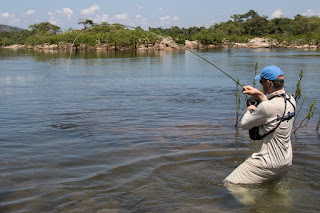 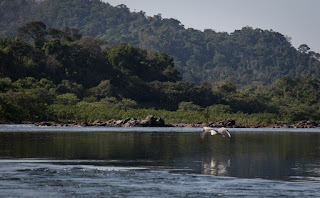 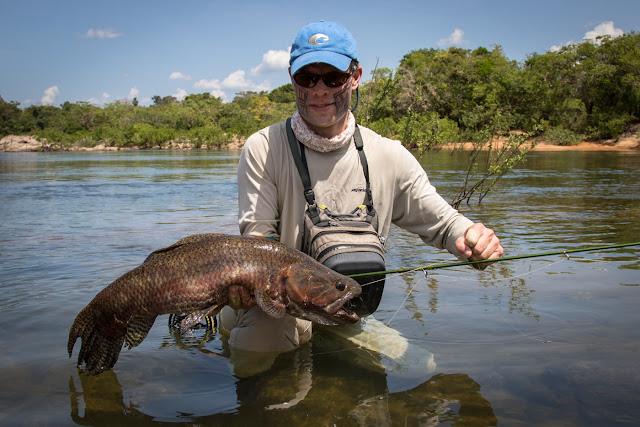 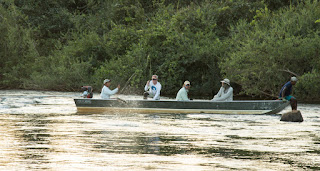 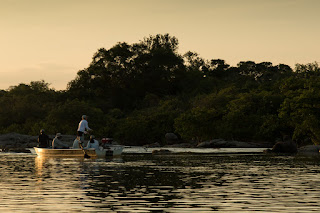 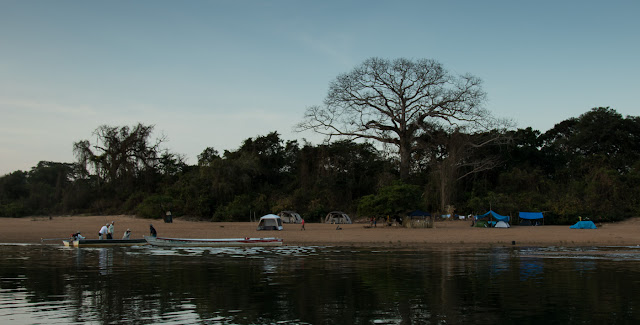 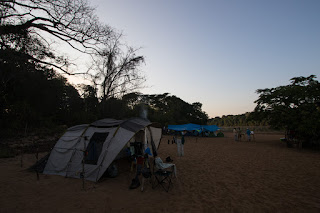 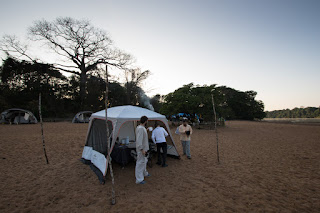 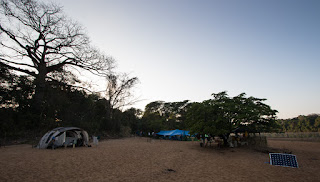 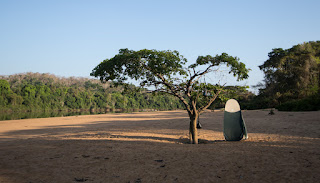 How as camp life? Quiet comfortable all over! We had our rather spacious sleeping tends, a dining tent, a toilet and a solar shower that worked surprisingly well, especially for those that were trained to shower with five liters of water – including a hair. Breakfast was around seven, take off to fish at eight, back in the camp around half past six, thus enough time to catch some fish in the hours between.

Alan the apprentice cook tried to give its best, but Ramiro put it to the point “At this camp it is not permitted to look at the dinner plates with a flashlight” – he got big laughs for that remark.
The beds in the tents were kind of noisy as every movement was translated to some kind of squealing sound caused by the air-mattress on the safari style bed. Not sure if I did sleep a second in the first night at all. Either these sounds or the sounds from one of the guests in the next tent made me wake more than once and the strong impressions of the day might have kept me awake most of the time.

Second day fishing showed the same procedure, except that we fished downstream from the camp. The river there showed far less appealing structure, more long gliding sections with low flow rate and barren structure. Fishing was much slower, it might have been related to a significant drop in air pressure. At noon we set camp with highly excited monkeys in the distance shouting with unbelievable high level of noise. It must have been a big dispute about something or an intruder such as a big Jaguar. We took dips in the large pool before the lunch site. Warm water, close to 30°C.
Our lunch fish barbecue must have attracted a Cayman from the other side of the big pool, it swam all the way over to stare at us. It got its share with the fishbone thrown to him and the left overs eaten by the Piranha. 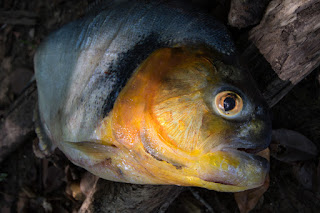 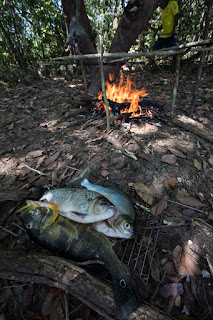 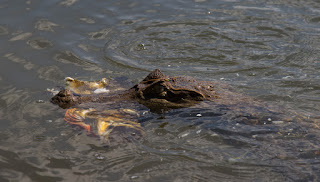 Fishing tactics are pretty simple: Peacock like structure and back eddies and their friend the snake (!), Bicudas can be everywhere but seem to have a preference for slower moving open sections of water. Wolffish can be found in slow side channels close to a good flow, frequently well hidden beneath stones and Matrinxa can be lured by poppers (sometimes taken dead drift or in action) or streamers or even more satisfying by fruit imitations close to or better under bushes and trees in the shadow. The last stile is similare to drift fishing for trout at Yellowstone River. 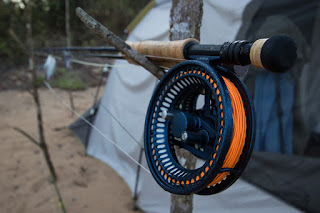 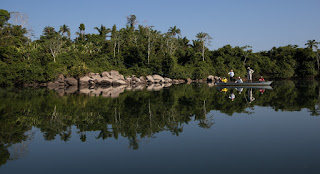 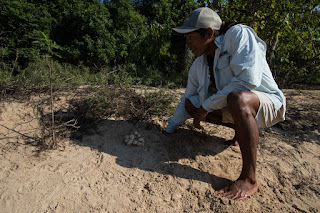 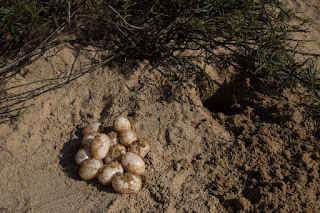 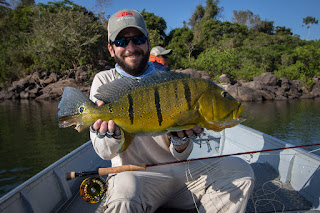 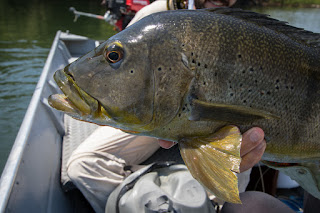 Leader is rather simple: 2,5 meters of level 40 or 60lbs (whatever is on hand and casts well) combined with 10 to 30cm 20 or 30lbs wire as shock tippet. I used that setup even on the 6th weight rod for Matrinxa, but then with a 20lbs leader and 20lbs wire attached to it as takes by toothy fish are always likely. Nothing fancy, if the popper tends to twist the line, just add a swivel between the nylon and the wire. Flies are tied to the wire via the classic perfection loop. Rods are 6th weight for Pacu and Matrinxa and 8 for Wolffish, Peacock and the scarce Pajara. A very heavy sinker on a 9 might be the best option for the Pajara. Except for the last one a 7 would provide a good compromise in case somebody wants to keep complexity down. Take spare rods, not because the fish will break it, but more because of the danger of high sticking or just destroying it in another way. Lines should be floating for the surface action and intermediate tip for streamer and fast sinking for Pajara. Take one or two spare lines. 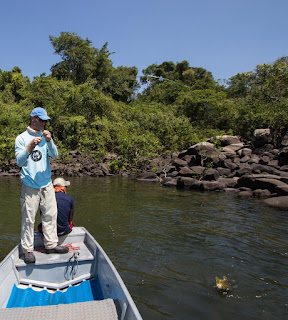 Flies in white, yellow, orange, light green in types such as popper, clousers, streamers and some fruit, algae imitating flies or buck imitating flies, nothing needs to be too fancy but should be well constructed, Nevertheless one Piranha will chew a fly to its end. Flies that look nice and just take one fish before dissasembling are not good. And as usual - only the fish caught barbless really counts!

Peacock attack the fly (mostly popper) with a big splash, Bicudas come out of nowhere and frequently miss the fly, Wolffish have to be lured with short strips and stops close to their nose, that frequently results in aggressive bursts. Lots of action and surprise can happen! That is the fun part about it. Nevertheless from my perspective tossing poppers all week long might become a little boring. Thus the search and sight fishing for Wolffish becomes appealing after a while, or the dead drift of a weed imitating fly for sighted Pacu similar to nymph fishing for trout in medium depth runs.


Did you read the first part about this adventure? 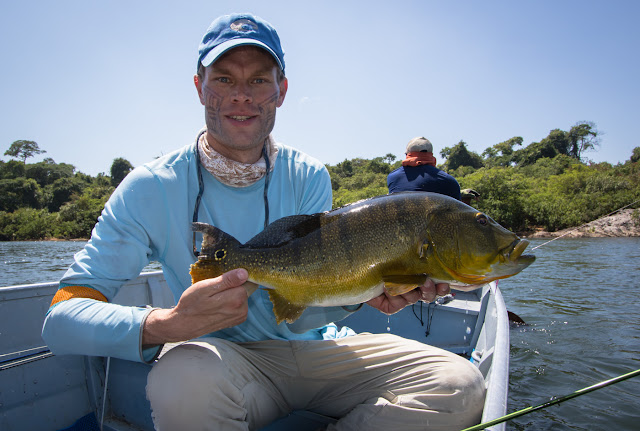