Since we arrived in Tekapo or better left the Rangitaka we were pleased with SUN. Compared to the first half of the summer here this seems like a gift. Thus camping is easy. Outside kitchen, no rain, everything dry. Except for some bitter cold nights, all of us wearing three layers, plus sleeping bag (the ultra light 800+ cuin Yeti with a weight of around 650gr – not really the bag you need for temperatures around zero Celsius), plus cap. The routine of shopping, cooking, preparing, cleaning settles in. The various tools and things find their natural place. Already now we can state: we did not forget much back home but instead packed a little bit too much from everything. Less is more. E.g. we are still being well equipped with chocolate from home and diapers for Tobias for another five weeks ... 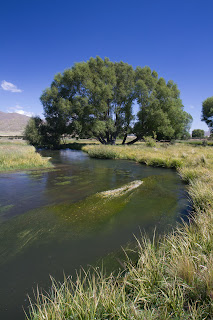 The first option to fish around here was a stream not too far away. Ines stayed at the camp and the Village for some relaxation with Tobias. The stream, not really a spring creek but kind of. Partially covered with Willow trees, but the NorWestern was not too bad either. So fishing was easy, except that in the slightly muddy water fish were hiding pretty well. I walked downstream for an hour to start fishing bag up. On the way I passed a promising looking back-eddy and stared at it for a while and there was the fish. Caught it on a size 16 black beadhead Nymph. A nice Brown just shy of 4lbs.

The stream was really tough in terms of finding fish as it was slightly silty and most of the fish tucked in the weeds or banks. The next fish 'some hours later' was tight up close to the bank. I nearly stepped on its head, but he did not detect my presence, so I could slowly back up and prepare. The Adams was not perfectly of his taste, so I changed fly and gotcha! 6,75lbs of Brown on some CDC half drowned mayfly thing which was done after the fight. 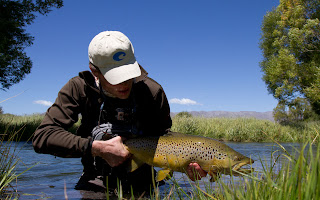 Later I came to a medium depth riffle of quiet accelerated flow where I saw some kind of shadow where there should not be one. I set up a Nymph, starting with the one from the first fish with no reaction and then a slightly brownish/flashy one. And on it was. A real battle with more or less holding the line or giving only inches of line. All of these fish were caught in some kind of dare and hold spot where any run of more than three meters would end with a lost fish, due to bushes, branches and obstacles in the water in which the fish would invariably be lost. 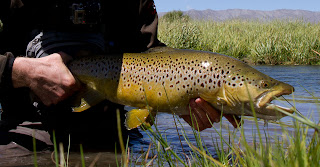 As it came to the net my estimation with 6lbs was totally wrong, the scale showed 2lbs more than 6lbs (The camera and the remote-self-timer where set up before hooking the fish. And the GoPro was turned off incidentally after the fight…). That was a really big smile and a decent way to start catching fish. As far as I remember I caught two others around two lbs each - small for here and easy to forget - but large for my home water the beloved Loisach at Garmisch-Partenkirchen in Germany. And might be I lost around two or three. Typical for the first days here, when you are not used to fight this kind of trout size. Let’s call it a day.

The day was celebrated with some fine lamp chops (lamp chops with the fat cut away, still on the bone, fried in the pan, then rested, seasoned just with salt and fresh pepper, a real favorite. Plan at least 8 chops per person. (Thank you to guide Bruce Leitch from QT to introduce us to that dish!) and some Pinot. Yummy!

The next day was again sunny, but something was missing: the wind. Lake Tekapo like a mirror, a unusual sight. We went for a small clear stream close to the top end of the lake. Asking at the station we got directions from the friendly farmer how to reach the water via a 4WD track. Clear and pristine laid the stream in the meadows. Promising. 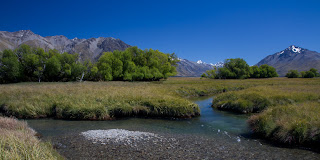 Ines joined and followed me and had Tobias on her back in the ‘kraxe’ (back-basket for kids). Making breaks and laying in the sun, feeding Tobias and giggling around. I tried to find some fish in the clear pools and runs of that stream. Not so much fish as expected but still some. The better ones all did not stick to the fly or where very nervous and spooky. I caught some around 2 to 3lbs and the best with 3,75lbs a nice Rainbow on small black Nymph. The further upstream the less fish. In curiosity of the western stream branch I tried to walk over the meadow finding me in a huge swampy area with small tarns zig zagging  to circumnavigate the deepest swamp holes. After a while of exhausting stepping in holes of swamp I went back to the original stream.  The western branch had more water but less structure.

A really sunny nice day on the water. We drove back to the camp over the 30 km of metal road, a long dust cloud tailing us.

Curios what the next day would bring...