Lake Ohau and a lucky draw on a nice lodge 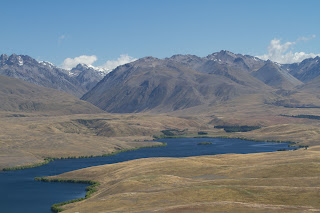 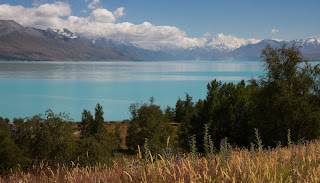 Leaving Lake Tekapo we had a good morning strawberry smoothie at the Astro Café on Mt. John. But not walking up there like Ines did the day before, this time we used the car instead. Next Twizel for some shopping, then Lake Ohau (I nearly forgot, in between was Lake Pukaki with the Mt. Aoraki - the highest in NZ - in the background. And we had sashimi not on our preferred salmon farm, as it was closed, but on the other Salmon farm close to Twizel). In the Ohau valley there was supposed to be a nice stream. 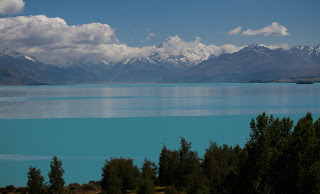 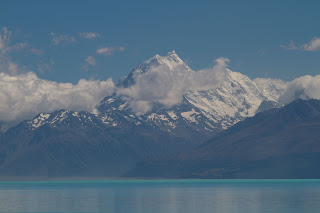 The weather forecast did not look promising and mentioned some rain. So we considered to book a hard roof. Driving down Lake Ohau we passed Lake Ohau Lodge. The simple room in the annex was quickly booked from Louise the friendly manager. This annex building (Huxley Wing) we had the first night is more like a Motel where you can drive right to your room, that was good for us as we intended to cook from our stock we just bought. I was not sure to go fishing that evening as the lodge looked very cozy. We had a Tea/Coffee on the couch in the nice lounge looking on the lake. But I went to the stream, well prepared with access information from Brian of the Lodge. Leaving a note to ask for permission at the according station, as there was nobody to ask. Driving to the stream a lady from the station passed so I could ask here. A bumpy track leads to the nice wee stream.

The wee stream was a classic spring creek. The sky was covered in clouds and there was some medium wind from NW. So visibility was not so good and fish numbers more on the low side. But I saw some, spooked some and after a while I caught a nice one. Caught it on a black small nymph tied by myself in the rush of preparation back home. This type of fly already caught a bunch of fish here. The fish that came to the net this evening was 3,75lbs. I lost another one of the same size. The fish did not seem to be really active, except the one I caught was nymphing in water around 5feet deep.
Back at the lodge we started to do the regular dinner procedure: setting up the camp kitchen and cooking. But this evening was special, as we had real high cuisine junk food: angus beef burger! They tasted terrific and where prepared more European style and not Kiwi style, as they use beetroot, which is a little bit hard to get used to.

That evening we had a strange visit right on our doorstep/kitchen from a bunch of pigs! They were lucky, as my knife was not in reach. 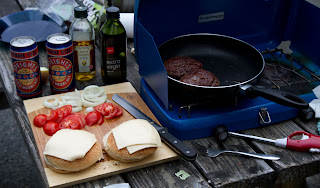 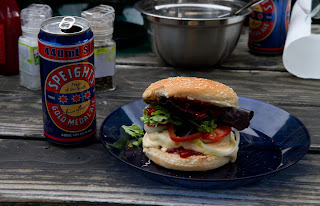 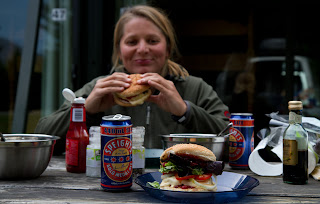 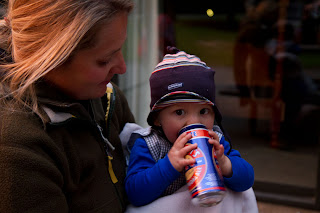 Next day saw no NW but southerly winds of medium strength and slightly less clouds. But before the drive to the stream we had to move. We wanted to have some lake view this night as the stars light reflects so nicely in the lake (just kidding). Lazy as we are we went for a ground level room of the South Temple Wing. The room definitely had seen its best days around 30 years back. But ok it was large, clean and easy to reach. That was the situation I left Ines heading off to the river. 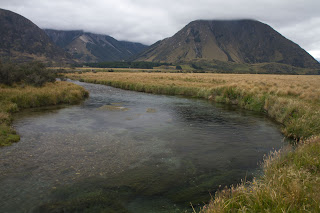 On the stream: strong southerly winds, dust in the air from the sandy beaches of the main river, some clouds. Spotting conditions were ok. Walking all the way down to the mouth was a nice walk but waste of time as there was nothing in the last kilometer before the streams mouth. After searching back up, I started to see fish, spook fish and finally catching fish. I caught two between something of 3,5 and 4,5lbs. As I am bad on counting fish – most of the Kiwi guides are very good on that – I started to set GPS-points with the weight of the fishes caught. If you might ask Scotty the Trout Murray from Murchison on that particular day early 2010, he will not only memorize the weight of every single fish we caught, but even the flies used and the depth of the indicator setting (in case of booking please mention my name and mail me!). But that day was really for the record book. With two fish beyond that magic mark – flyheads know what I mean.

Back to the stream - I think I spooked three or more good to catch fish by setting up the cam on the tripod, in the time everything was set, the fish were gone. Ok, two nice fish, nice day - lets go. Hmm I was not totally satisfied. Back at the car I thought about fishing a few meters of the piece of water I already touched yesterday. I came to a promising deep pool. Set up a Nymph and a (split) shot and gave it a shot. And after some casts a strong fighting rainbow came to the net at 6,5lbs. Wow – interesting how one single fish can really change the mood and the evaluation of one day. Now it was a real satisfying day on the stream and I was leaving the stream around four and racing back to Ines, not like Ken Block but kind of. 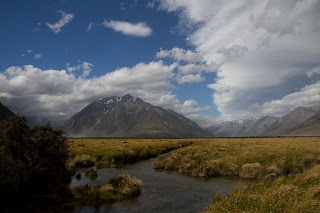 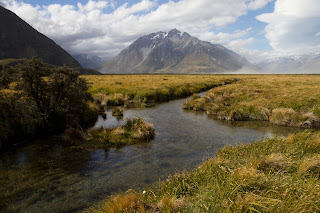 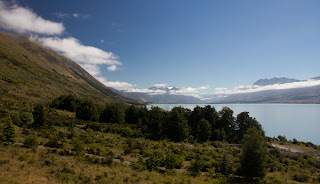 Arriving at the lodge, I was wondering about the luggage in our room and was knocking on the glass door. No Ines, instead she called me from the first level! She decided to overcome laziness and to carry our stuff up to the room. I knew that room before – it was her initial decision to choose ground level. ; ) The revised decision was a very wise one. The first floor rooms are really nice, newly renovate, nicely furnished and fully deserve the term ‘lodge’. So traveler: Lake Ohau Lodge, book a room in the Upper South Temple Wing and try to get one closes to the lake and say hello to Louise from us. A real neat lodge with some kind of Scottish charm on a good value for money. Definitely a good place to spend one or two nights, exactly the right bit of the beaten path, only a detour of 30 Minutes.
Side note: by the time of writing up to now, my favorite wine this time is ‘Wild Earth - Pinot Noir 2009’ we just bought today at the winery close to Cromwell. More on that visit later on. I am just having the last sips of the bottle.


Back to the room selection topic. Ines enjoyed with Tobias the day doing a little walk in the nature and letting Tobias discover the new room with soft carpet. After that nice upstairs surprise we went together to the lounge to have some beer and coffee. With us in the Lodge was a group of young people traveling around. There were two young ladies who had big fun to hold and Tobias in the arms. We should start to charge 3 NZ$ for every minute holding him and 10 NZ$ for a picture with him. Later that evening we had to set up our stove on the first floor veranda. No problem, we are used to stealth cooking. We had some nice dinner and went to bed.

As mentioned before we went to the Lodge due to the announced rain. An guess what - did it rain? No it did not. But the nights in a real bead where good.

Little Tobias in the meantime discovered that there is no real reason to go to bed around seven. And Ines could not really persuade him, and I am a bad example staying up late most of the time. So by now he goes to bed around nine.