Flooding of our dreams?


For the next day, Chris and I had high anticipation. The plan was to tramp to a headwater camp of a tributary of Secure. A backcountry trip with in the Bolivian backcountry only for the experienced and angler used to walk many hours a day without a patch. Marcelo, one of the shareholder and founders of Untamed proposed that to me one year before the trip, while I met him after my exploratory trip to Kendjam in August 2015. His words made me listen.

The following night that annoying bird with its stupid night call was not the worst. Instead the super worst thing happened: in the middle of the night a thunderstorm with very heavy rain reached the whole catchment. Heavy rain was pouring down, lightning strikes right at the camp and close by several times. As if the river would flow directly down right from the sky. Lots of water, too much water for my taste. 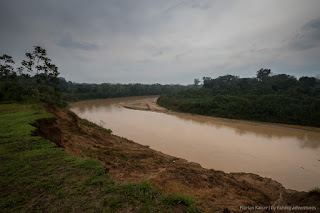 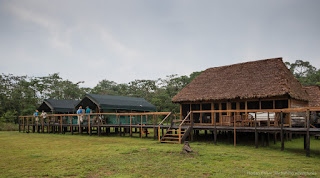 In the morning everything was wet, Secure was up and dirty with big tress and logs floating down. How much rain came down, where and with which effect on the tributary we wanted to fish? Questions, doubt and hope at the same time. Finally Luciano came with the bad news that our tributary was flowing roaring four meters above normal level and two of four Tsimane canoes where swept away. No chance to go there this day. The other two groups tried to fish the main river but came back after less than an hour as the main river still rose considerably. We were disappointed. Our plans we dreamed of did not work out. The rain stopped early morning but Secure continued to rise till around 7pm the same day, thus around 12-13 hours later. The whole catchment got a solid storm. Our only option was to wait till the next morning. We did that, spending the day by reading, chatting, writing, sleeping and eating and possibly smoking. Sometimes a day of rest is not the worst, but with those great plans in mind it was just a nuisance, kind of like a wind knot in the leader.

This situation clearly showed that fishing-plans are related to weather and sometimes it is just luck to hit the conditions just right. In locations like that or for example SI NZ, be aware that you might lose the one or other day during a week due to high water. Don’t be upset, enjoy the other days even more!

Next morning we were very happy: we could start our tramp upriver. The tributary was still high and murky like a too strong coffee with some milk and mixed in sand. Neither good for fishing nor for drinking. Crossing the river, back and force at top of the pools, walking on the side or in the river up to the chest, swimming twice with the watertight Patagonia floating backpack as a micro raft for the rod. I did not check the time but guessing we were around 3 to 4,5 hours on our feed. After a while we started to make a few casts in highly promising water or when we could identify some likely Dorado action. Not much success though.

As we came closer to the spot that was supposed to be our camp for the night, the expectations rose, if the camp would still be there or would have been washed away with the trees and trunks we saw floating down the river. Guide Luciano accelerated his step. Not looking back once (as he never did in my impression - strange habit when you fish with clients).

Some two kilometers below the camp spot we found the shell of one tent stuck in some driftwood. Luckily this was the tent that had the lowest location within the camp, so there was still hope.

Approaching the camp the water was supposed to become clearer. It did that but only with a gradient as if you would slowly drip single drops of clear water in the above mentioned strong milk coffee.
The tributary up here normally would run close to gin clear, but this day it did not. It was still high and dirty. We finally reached the camp and were surprised to see the two sleeping tents still in place. They got some water inside and might have been under water for up to a foot during peak flood, but it meant that our plan to camp and fish the other day was not jeopardized. As the four Tsimane following us some hours later would bring Chris’ and mine dry sleeping bag, we even would not have to rest like a fish in a wet environment but would have a dry place to sleep. So this adventure could continue and we did not yet start fishing seriously. 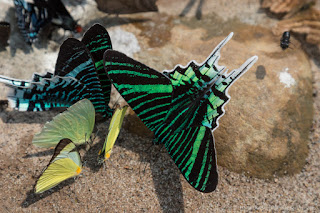 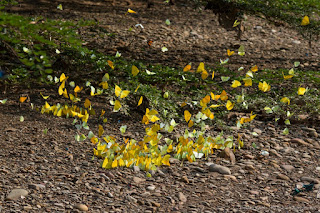 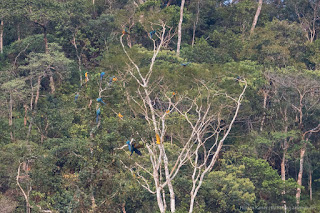 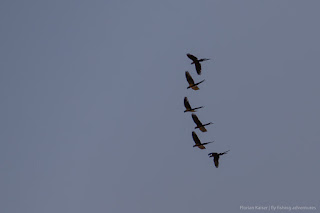 A tremendous part of fly fishing and traveling – at least for me - is to experience truly remote place, discover untouched nature and to see places “normal” tourists barely ever might visit. After years of traveling that became kind of normal to me. But this place nevertheless was special, remote jungle within an area that was already remote. Birds, butterflies, fish, trees, plants and the river. But as remote places with frequently awesome nature are linked to the style of fly fishing I love, I am kind of used to it and do not consider it as unusual. I just soak it up in my memory and silently enjoy. At that place I would not have been surprised if there would have been a Jaguar right behind the next river bend as we were in an area with one of the highest remaining Jaguar populations on that planet.

(spoiler: some very good action was just hours away!)