Back to the bush and the fish – Part I


As usual the start towards Reefton for my four days of “father without family fishing excursion” happened a little later than planned, but it was still early and close to dawn. Driving south towards Murchison I immediately saw the result of the cold day before: snow on the mountains, close to freezing temperatures and fog in some valleys. Autumn was there and could not be neglected any longer.

In Murchison the good cappuccino showed high attraction and made me to stop and have a short break with a slice of cake. Sitting there on the chimney in the Café a man came in and asked “is that car outside your car” I did not recognize him and was a little irritated as I was parking against driving direction. It was Tony from Overland rental on a tour with some clients. NZ SI is a village.

With an open eye especially on long straight sections of the road, because that is the kind of road the speed limit enforcement officers (aka Police) prefer most of the time to tell the driver “You did drive 1XX km/h – you were to fast!”, I reached Reefton and continued to the access of the river. Dirt road, packing the final stuff in the pack including tent, Neoair mattress (the lightest and most comfortable mattress but unfortunately after around 30 nights the first and second series tend to loose air – a known production problem as they changed the design considerably in the meantime), sleeping bag and food for one night, I was ready and set to start this little adventure. The steep slippery access was kind of funny with the pack. Arriving on the river around noon I pretty much immediately spotted the first trout and prepared my rod. Leaving the big pack on the bank to fish the single pools just with the small watertight pack. 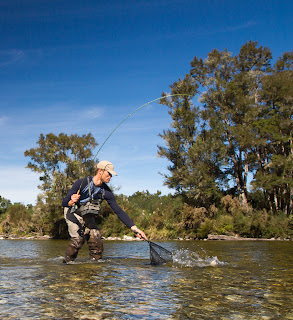 First cast on the river and fish on! The strong 6lbs brown took the barbless nymph and after a good fight it came to the net. Such a good start, I was curious how it would continue. It continued quiet well. The next fish – all of the day came to the nymph – was a 7 lbs brown caught by blind casting in a good looking run. Followed by a 3-4 lbs fish, another 7 lbs brown and finally a brown of 5 ¾ lbs. The second 7lbs fish was special. A cast of medium distance in deeper water, the fish took and provided a good fight, going around one big boulder in the deeper part of the pool I had to follow and the usual thing happened: having the chest waders only waist high was a bad choice and I was wet. The fish felt much heavier and I hoped for something around +8 lbs. A very good looking brown ended in the net and was gently released after some pictures. (Fishing solo I have my DSLR readily prepared with the remote control so I can shoot quiet quickly without keeping the fish to long caged in the net, taking close care it breathes well. Besides that I do by far not take pictures of every fish caught) 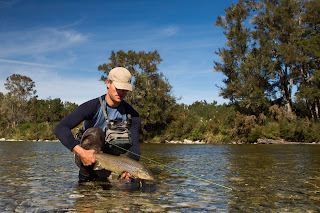 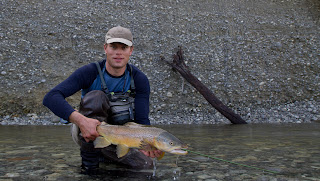 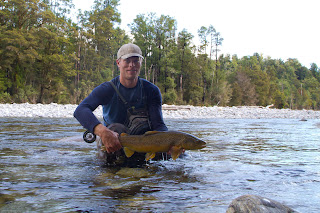 For the night I intended to set up camp close to a major creek entering the main river. I found a very neat spot: a few square meters of sand close to the high bank, sheltered and surrounded by big rounded granite boulders and driftwood, fallen trees and a log jam. A perfect place with lots of firewood around. It was not so much up the river as intended but further up the next day I did not find anything comparable. Dropping the big pack there and continuing upstream to catch the last fish of the day. It did not long to find the next and the next brown but they were soon suspicious so I continued to find the last catchable fish and caught it – a nice 5 ¾ lbs brown. The fish on that day did prefer some rather large may-fly emerger in dark brown, size 12, with black tungsten bead head fished rather high in the water column. But some of them again were fooled by the ESPT nymph size 14. 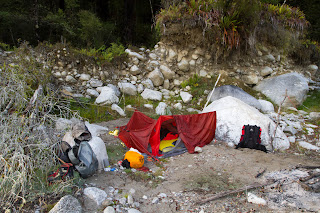 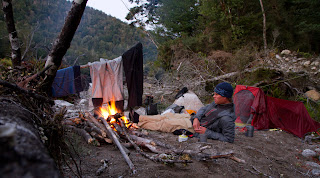 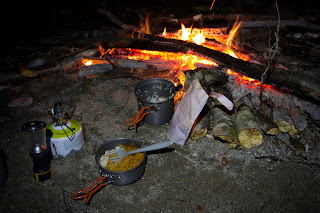 Finally I checked in at the camp aka “Sand-Flat Hilton” at around 6pm. I had to get a fire burning to dry all my wet things and especially the wet waders from the dip caused by chasing the seven-pounder. Starting to unpack my pack and unwrapping the tent – or at least what I thought to be a complete tent – I realized that the poles where missing altogether. Exactly that happened what I was afraid of as I checked the tent back, not by unpacking but by touch on completeness. My reaction was undecided between: ‘rush back to the car before its dark’ or ‘you fool - no find a bail out’. I knew it would become a funny night with a half collapsed tent as I expected temperatures close to freezing. Now it paid that I choose the camp right in the middle of obstacles and had some meters of cord with me (6-10 meters of 5mm cord – always a good back up! An other item not to be missed are light flip flops and medium thick merino socks - in combination that gives you dry camp shoes). Before trying to set up the tent I tried to start a fire as this would be the alternative to the tent: having a fire up all night. This worked out though the branches where still wet from the last rain. This was done, so the tent. With some technical constructions of the available cords, trunks, stones, boulders I managed to set up a form that looked like a tent at least. It was time to get rid of the wet waders, build a construction to smoke them – I mean dry them and the other wet clothes. It was pretty much like baking a cake: keeping the right temperature and not to burn the waders. Plenty of firewood was available so the fire was nice and warm. After a while and some very relaxed hours sitting and lying on the campfire I started the dinner preparations: butter chicken with rise. Unfortunately I was lazy and brought only one can of beer. The clothes and the waders got dry, I only burned the wading socks slightly. Lying beside the warm campfire and gazing at the thousands of stars on the firmament above I thought silently smiling: That is fishing! What a blast – it could not get better. (Might be with tent poles…). 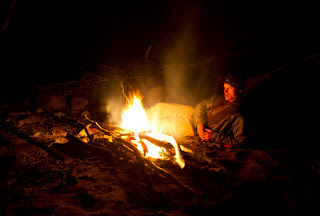 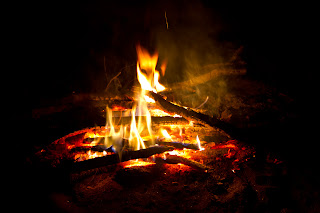 The night in the kind of tent was cold and I did not get much sleep. Next time we would definitely need the Yeti VIB 600 sleeping bags instead of the ultra-light VIB 250 bags. 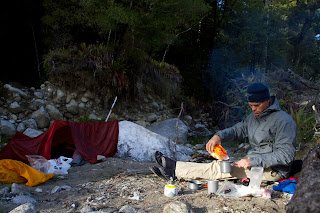 The camp spot was perfect as there was a spot of sunlight ride beside the campfire in the morning. Getting up, lighting the fire again to take of the chill of the morning, cooking coffee and preparing some muesli. I was ready to go for another day in paradise. Fishing up from the camp all the way to a point where we turned around fishing from the top two years ago (back then we choppered in further up). The day was the contrary in terms of fishing to the day before: I spotted dozens of fish and got several got shots but all the fish where just close to take my fly. Might be some took it and a I did not recognize the subtle takes. I ended up fishing this beautiful river right into the bush without catching a single fish. Unbelievable. Still it was a super day! I was totally happy and did not really care to catch nothing. For sure a couple of seven-pounders would have been the icing on the cake but it was ok like that. Around 5:30 pm I turned around and rushed to the camp sot, packed everything for the way out and rushed down the river to reach the exit before dawn. This worked out by the minute but climbing up to the car was only possible with my bright headlamp. Without it, it would have been impossible to find the track and reach the car.

Happy to reach the car and driving out and over to Reefton, sending a message to Ines that I was back in the car as soon as I got coverage. That was a real nice adventure! Next time: check the tent.

Welcome home – I arrived at the familiar cottage in Reefton, had a Tortellini dinner a few beers, a movie in the TV and was ready for a solid sleep in a warm bed with no sandflies… 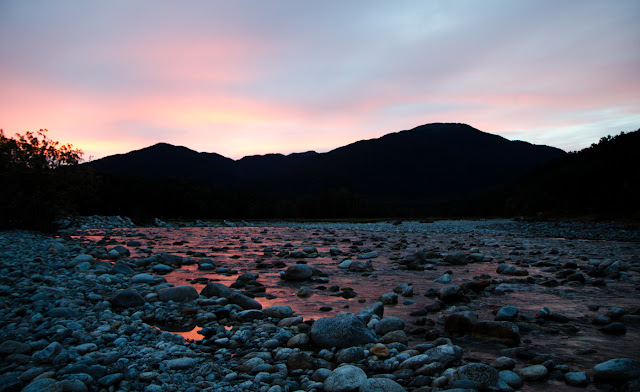