Leaving Reefton with a totally silent car – WOW! I thought that a car of some years of age has to have some sound – but ours again was totally silent. No it was really hard not to go much too fast! 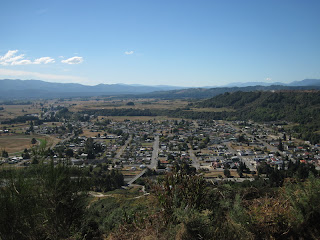 The night I came back very late from the climbing access river we drove north towards Murchison. To have a point to target, I fixed some accommodation beforehand in Murchison. And that was a the worst we had up to now. Kiwi Park. 155,- for some old standard (70es?), motel style flat. It was not refurbished in 2012 (as they announced), it only might have seen some new curtains. The best thing was, that it was silent and clean. Internet was expensive and complicate. The fully equipped kitchen only had two flames and actually was not a fully equipped kitchen compared to normal standards. The value for money compared to all other accommodations we had (except double Hari) was very poor. Never again! Traveler’s advice: avoid Kiwi Park – if they offer such a quality it can’t be much better elsewhere. We had to stay there and it was the only place where I had not a good feeling on the end to pay the bill.

What I totally had wrong in in my memories: Murchison is much smaller compared to Reefton and much less hospital to the Tourist. I would even say: Reefton has at least a bit of appeal. In Murchison this is much less present. But both villages offer some good fishing if you hit it right. 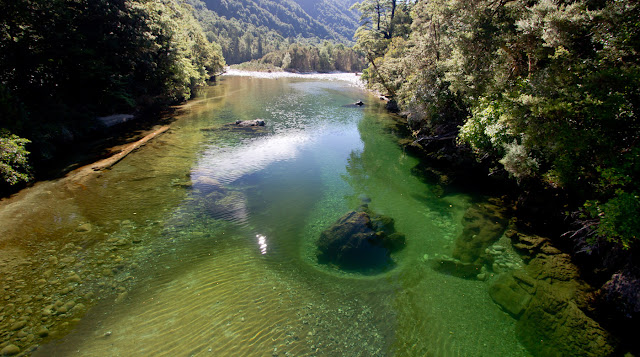 Fishing around Murchison meant two unbelievable disappointing days without fish. First day fishing the main river south of Murchison some kilometers below a stretch where I had a double double digit day three years ago with Scott Murray. I might have seen one fish. On the way out over the paddocks (as usual I asked for permission before) I ran into a couple driving up the valley. We briefly chatted about fishing access. I relocated to a medium stream not far away, found a way to enter the semi gorge and had massive problems with the spotting: overcast as the whole day, gorge type river section, dark river bottom and slightly brownish water. I saw fish but all pretty much too late. And I did not want to blind-fish. I fished a much longer stretch than planed and had to walk back a boring road. Arriving back at the accommodation I was surprised to see the couple I talked to on the first river to be our very neighbors: a friendly couple from Australia.

On that day Ines went with Tobias for the better option: going for a walk and to the small village and meeting one of the two persons she knew in Murchison in the Café. Leya, the wife of Scotty. 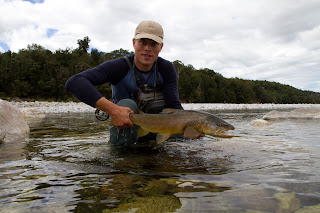 The second day we went all three to the river fished the day before but some kilometers upstream as the day before. Pretty much exactly the section of the above mentioned red letter day three years ago. For 2 kilometers I did not see a single fish in the relatively low river. Not before the more stable sections and pools of the river fish showed. But none did like my offering. Or rather I did not set the hook in time with the odd fish that took my nymph. Most of the time I was fishing nymph on sight, so no indicator at all, only judging from the fish behavior or the mouth flashing, all combined with limited visibility due to semi overcast sky and limited dark bank foliage as a background. Compared to that the striking with dry fly is easy. Ines followed patiently with Tobias.

It was a hard test for me to finally spot some fish but unable to catch them. At least we were out in a nice landscape. I quit and we went back rather early to knock on the door of Scotty and Leya to say hello. And to pet the lovely mouse-feasting cat Jasmine. We had a quick beer together, exchanged some news, had some fish talk with their South African clients and headed off to our funny flat. This time Murchison did not provide any luck. It was so depressing, that I did not even take pictures of anything else besides some cows chewing grass. After three nights in Murchison we went again east towards the West Coast and further towards Karamea. Where we made arrangements well ahead of time for a nice accommodation for Ines and Tobias and some fish-fun for Florian (4F!)...

(In case you wondered about the pictures: all are related to the week in Reefton)