Karamea to Hanmer Springs - Easter on the Rainbow Road 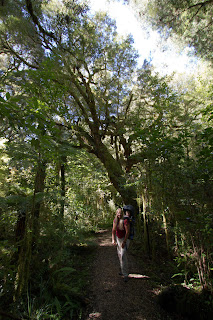 After that cracker of four days in the bush in a convenient hut, with challenging but rewarding fishing and lots of walking, my feet were two sizes bigger and there was no need to move too much.

I asked Ines to show me the Oparara Basin with the Moria Gate that Karamea is famous for. It was pretty much the excursion she ‘rehearsed’ on the day before with Tobias. So she went there again and I for the first time. The loop walk combines the arch / kind of cave and the tarn. It was a little longer than her estimation of ‘around 10 minutes’ – more to an hour. The Moria Gate provided some nice motives for pictures, especially a rock structure inside with its wave shaped erosion patterns glowed like gold in the low light of this semi-cave.

(Might be anybody did recognize the frequently usage of the term 'semi' - it is more or less about making fun on a NZ butter brand that describes its product as "semi spreadable" but in fact it is the worst butter to spread I ever encountered. Other terms to make fun about would be 'retreat' or 'boutique'.) (... oh and the text in the brackets before was only inserted due to typograhpic reasons making the text more appropriate to the pictures) 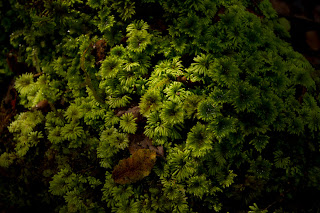 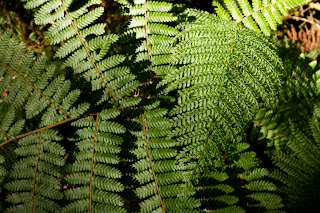 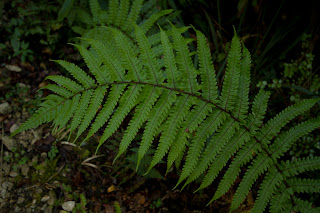 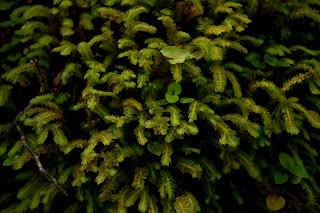 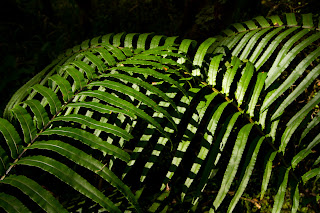 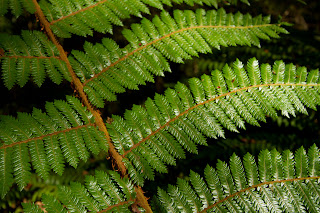 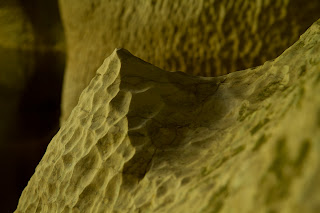 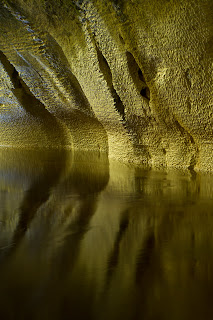 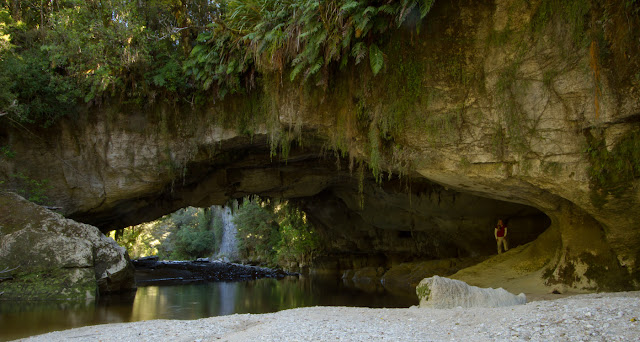 This night we had a reservation at the Riverstone Restaurant in Karamea. The best location for a dinner in the north west corner of SI. The food was very delicious and for the first time we had some whitebait (very small fish). It was served in an omelet as appetizer and tasted surprisingly good. This place can be recommended absolutely! Riverstone even offers two chalets as an accommodation option for the time after the beloved Karamea Lodge. 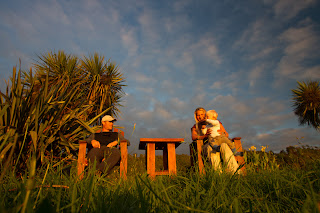 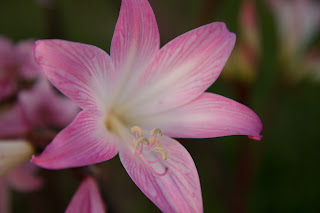 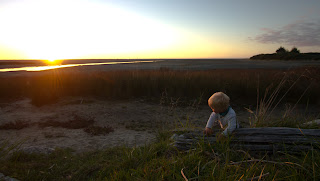 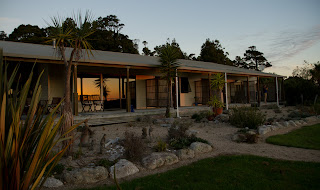 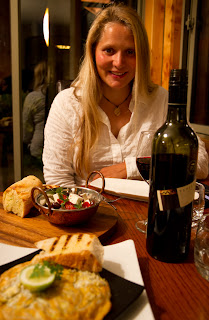 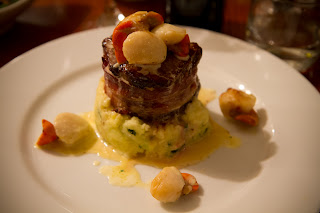 The next day meant to leave Karamea. We drove over the winding road – luckily Tobias was sleeping – towards Westport, up the Buller Valley. There I saw a group of three, one girl and two boys coming out of the bush with rods in their hands, right as we passed on a place where it was clear that they fished a river that we were fishing two years ago. I slammed the brakes, jumped out of the car and had the trout-bum interview: where, what, how far, how many, what size….? They did not do well (no fish) as they did not walk up far enough. We back then made pretty much the same mistake, nevertheless we had some fish contact. Our fishing there some years ago was kind of adventure. We walked in partly on the riverbed with very little local knowledge, camped around two hours in on a  good camping spot there. As we did not walk in far enough we had hard times fishing and only hooked/landed some fish on the first day. That night the rain started hard and it rained and rained and in the morning the only option was to break camp and rush out as the river was close to not fishable and the water rising fast. Around late morning we arrived at a little side creek that was on the way in just a creek of might be 0,5cums. Now it was a small river of boisterous 15-25cums with a very unclear main current. We had to set camp and pitch the tent again, found a good spot just 100 meters bush bashing up that creek. The plan was to wait for the creek to drop again. The rain eased but still it was raining. I defined the deadline with 7pm and a drop of the creek of 30 centimeters - in that case we would rush and head out the same evening. We spent a boring wet day in a tent, not much to read (Ines had something), not much food left for an additional night. Luckily it worked out, the rain stooped, the creek drooped exactly by the defined amount, we managed to cross the creek without losing control, headed out found the kind of track most of the time, luckily we had one good headlamp and finally arrived at the car at 21:45 close to pitch black - we were happy! The late meal in Greymouth we got in a bar tasted delicious! And we found dry accommodation! I pretty much realized my miss-planning: food, weather and did not go far enough : ) Still it was a good adventure to be told in future years. For this trip this kind of adventure was no option.

The other drivers on the road were not so happy about my parking in the middle of the road, so I ended the brief interview and we headed off. Reefton (hello cottage!), Springs Junction, Lewis Pass, and finally Hanmer Springs. Tobias was screaming around one and a half hour – so I could not fall as leap while driving. On the way towards Hanmer we booked the very last accommodation. A funny 60es style motel/cabin. Good for one night and reasonably cheap. We arrived close to dark.

It was Easter weekend. The worst place is to be on Easter is Hanmer. It was no intention it just happened and could not be avoided. Ines wanted to go to the Hot Pools. Not for me. As she saw the 100m queue she revised here intention. We did the groceries to drive the Rainbow Road north of Hanmer (take care to be informed about the access restrictions and rules on this 4WD metaled road, do not try it with a motor-home or a 2WD!) for a couple of days and to fish some rivers and lakes there. Due to the expected traffic and possible fishing pressure we drove right to basic Coldwater Creek camp and omitted some 4WD-river access. We passed the highest pass in New Zealand - pretty much without stopping as the landscape was of rather low attraction. At the camp there were two other groups at the campsite. A couple from NI that was just about to discover SI after traveling the whole world and a family celebrating their anniversary with both we had some friendly conversation. 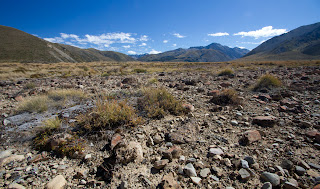 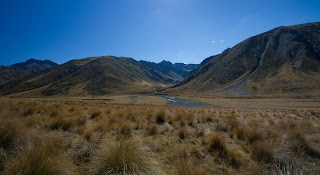 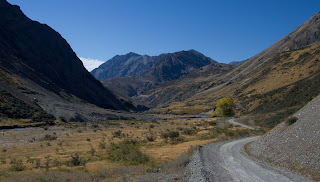 This night rain started and the next morning looked everything else but friendly. The lakes where no option due to lack of visibility, wind and some gusts so we drove to a stream / tributary of the main river to check it out. But with an overcast sky spotting is very hard. It still rained and I was far less than motivated. We decided to head out immediately as the weather was not clear for the next days and I did not want to lose a day sitting in a wet tent. We continued further north towards the middle part of the Wairau valley, passed the Rainbow valley road and arrived in St. Arnaud without any plan where to drive afterwards and no accommodation for the night. Thus the next step was to find a cup of cappuccino as at least its handle would provide some hold. We found that and I had an awful time to figure out what to do and where to go. This really gave me and headache as the options where Blenheim, Nelson or St. Arnaud. After a while of checking out availability of accommodation and prices we ended up to book a night at our usual place in Nelson. The Rutherford Hotel in the big ugly building. But it offered again reasonable prices and high standard (btw the owner of the Hotel is famous for his nature destroying river dam projects – please do not support this and book somewhere else in case you are more sensitive than we were). That night the dinner was special: room cooked tortellini with a decent fresh ready-made sauce. The sprinkler did not start. 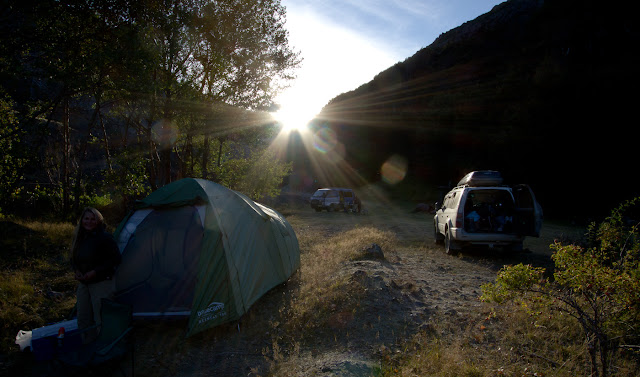