Nelson at the Top of NZ NI – where is here good fishing? 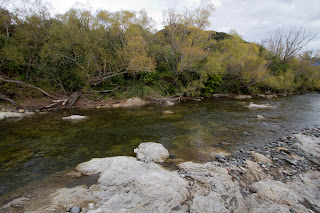 As the Rainbow Road did not provide much in terms of fishing I had to get to the water as soon as possible. I remembered one semi hammered river just an hour away from Nelson, so I gave its middle/upper section a try (where a gravel road follows the river). Strange river with limited visibility on that day due to the partially covered sky and the dark river bottom. It did not look too bad at first but the fish number I spotted or spooked was rather low for my expectation. Nevertheless the river did run low and thus nice and clear. The fish I did not spook were rather spooky. I ended up blank. The leaves were about to turn yellow and brown - autumn was there. On the way back to the car a friendly farmer offered me a lift on his quad for part of the distance. For dinner Ines figured out to go to Milton Street Takeaway where we had decent fish-burgers. A good place for a quick and simple meal. And on that 1st of April we fixed the accommodation from the next day onwards. As mentioned it was not easy to find something in Nelson that suited our needs at a reasonable price, nice setting and close to the center.

Tuesday we packed everything for the relocation and went on a winery and Nelson area tour. Visiting Höglund Glas (as usual), Kahurangi (surprisingly good wines), Neudorf (as usual, for lunch cheese or bring your own picnic in the garden, I still do not like their wines so much) and Woollaston (they would have offered a nice platter as lunch in a very nice setting with good wines – recommendation!). We unfortunately did not know about the lunch option and Wollerstone and had some greasy sandwich in the oldest pub of NZ and some so so cheese at Neudorf. 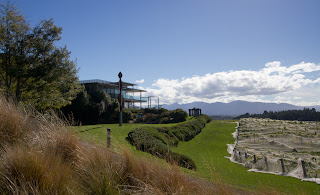 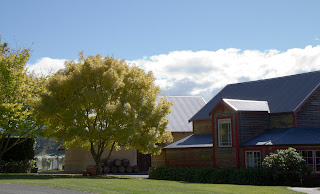 This afternoon we relocated to our home of the following days: Avocado Apartment at Cleveland Terrace. An apartment that offered not just a very nice view over Nelson and the sea, quiet location, fully equipped nice kitchen, an orchard with fruits and vegetables to be consumed and a quality of building that we did not see often. The very friendly owners gave us a glass of absolutely delicious honey and a bunch of fruits to. At that point we did not yet know for how many days we would call that apartment home. Unfortunatly the avocados were far from ripe or ready to be harvested.

One of the better restaurants in Nelson is the Hopgood’s, thus my idea was to go there, have a nice dinner and share this evening with Mike and his wife Nans. Mike the fishing guide pretty much introduced us to the NZ style of fishing three years ago. We were happy that his wife could finally join us and we had a nice evening with lots of fish talk. It was good to see him again and that there was no need to take care of the dishes afterwards. 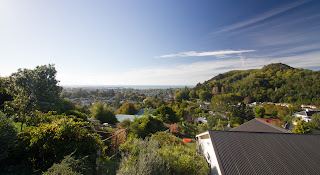 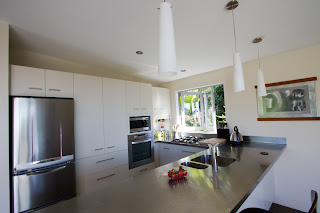 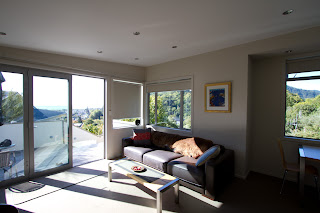 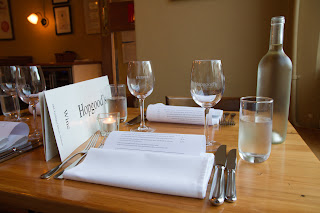 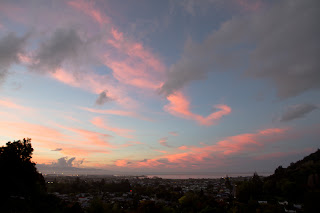 Rain in the night and rain in the morning called for a very relaxed 3rd of April of writing, editing pictures and shopping in the afternoon. Nothing more, nothing less. Most of the rivers might have been still good fishing till around early afternoon, but I did not feel the urge to go out in that downpour.

Thursday Ines and Tobias went to the center of New Zealand which was just some kilometers away, they continued via the Founders park, the Japanese gardens and back through the shopping parcours. I set up my fishing parcours as I had the idea to fish the river at the Rainbow Road (after getting the key from the station) that was still a little high and colored. Just saw and spooked very few trout in the silty water, fished two or three spots and finally decided to drive up all the way to of its major tributaries. There in the junction pool I hooked one fish on a fly not to be mentioned (neither dry nor nymph) and saw a dolphin taking a fly from the surface (looked like it was rolling) that left me with open mouth. This dolphin was either a huge trout of something ++10lbs or a very brown salmon. The sun was already close to the mountain’s ridge so I rushed up the river but did not spot any reachable fish. Too bad, should have gone there right from the beginning. No fish this sunny day but still a nice trip up that valley we drove down a few days ago in rain. I did not expect to be back so soon. The two upper sections look promising and even the fished stretch of the morning should be good on an according day. Driving back over the dirt road, opening and closing various gates, crossing streams and finally arriving at the paved road towards Nelson took quiet some while. 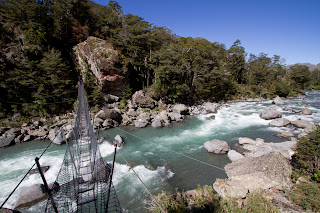 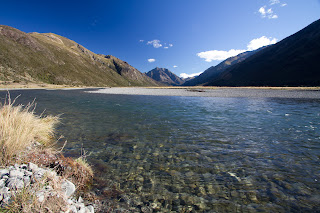 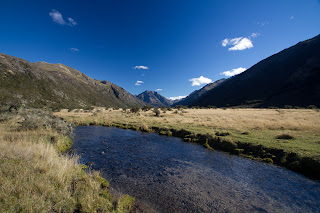 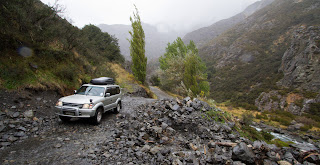 For dinner we met a friend that I talked into New Zealand last summer. At first she just wanted to travel New Zealand for some month after graduation but she ended up to be a guide and finally the junior manager of a horse tracking business up on the very north tip of the SI. She extended here stay in NZ several times - might be my talking was good to start this. 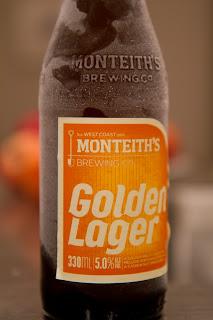 Friday was supposed to be a real family day. We went to the beach, had a short swim and a dip up to the chest for Tobias. The sea was somewhat cool but ok for a swim and the beach deserted due to after-season. Tobias loved it till he shivered. I was feeding a metal-detector-guy with coins by throwing a couple in his search path. Before that I tried to get some input from Mike where to fish the next days. The input was slightly less specific than I hoped for, but it made me to drop my plan to do some chopper thing in the Kahurangi and instead confirmed my alternative plan to drive back to Reefton for another four days for focus on fishing and curing the fever that came back after the last fish less days. Further ‘our’ cottage in the village of light would be available for a stopover in between and for the last night. As the weather forecast was again altered I planned to start early the next day.

The outlined planed was to fish two rivers, one for a campout and the other with rough 4WD track access and a night at a hut. It was time for some serious fishing again, I was hungry for some bush bashing and river walking! I was looking very forward for that and a couple of nights of solid sleep.

Leaving Ines and Tobias alone was acceptable for them as Nelson is a real gem and lovely village. Everything on hand, a nice apartment and relatively good weather announced. Nelson would definitely be one of the places to consider if relocation to New Zealand would be a serious option.