The last days on SI NZ 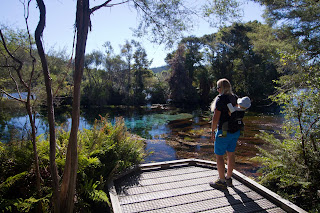 The family was happy to see me again – at least I had that kind of impression. 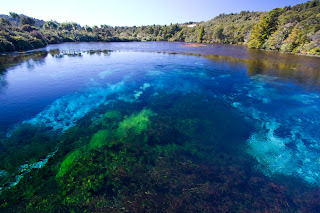 We had another day in Nelson before we had to move onwards further north. A family day was what we all needed. So we went to the west to go over to the Golden Bay. All the way over this winding mountain road I thought to myself: strange I know that street. It took a while till I realized that we went to a river “behind the mountain” (Takaka pass) back at our very first river to NZ in 2009. This time we continued towards Takaka, a small eco-touched tourist village with an alternative boutique stile spin. You got it?

It was semi-eco. It started off with a lady at DOC in Takaka I asked about possible Didymo in a certain river (as the main river had) and any restrictions related, but she had absolutely no clue about it. Then there was a lady outside of DOC protesting and collecting supporters against the budget cut of DOC of about 5 million NZ$. But she could not answer the question what the total budget of DOC was at all, so if 5 million might be percent wise much less than other organizations where facing or if it was substantial at all or could be saved by using less paper. And finally and third there was a lady which looked very strange at us as we asked here to heat the wrap we choose for lunch for 10 seconds in the microwave (the wrap was chilled). She replied “You can’t heat lettuce!” I was done with that village, let’s get out of here before I get mad.

We continued towards the Pupu springs. A significant spring feeding a spring creek with very pure and clear water. One of the clearest springs in the whole southern hemisphere.

Later on our ways separated, Ines and Tobias went for the Pohara Beach and I went to fish that spring creek. My story is told quickly: perfectly looking creek, difficult access (farmers sending you somewhere upstream to walk all the way downstream over paddocks), only one fish spotted, very slippery ground that made me not just to dip but literally to swim with the rod in my hand. Thanks again to the watertight patagonia back pack. I finished this creek without a single fish-contact. 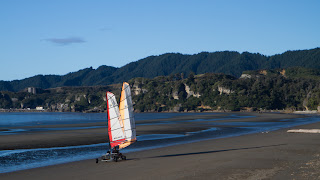 In the meantime Ines and Tobias did spend a few hours on the sandy beach. After a while the wind increased and they headed for shelter at the local playground and the local cafes. I quit my excursion rather early so it took some local investigation and just a short search to find them hiding in a cafe.
That was Golden Bay – we went back over the hill to our nice apartment in Nelson.

Some days ago we had the idea to spend a few days over in Golden Bay. But it turned out that decent cottages where unavailable or unattractive due to unacceptable rental conditions (such as no linen or change of rental fee). And after these hours over there we came to the conclusion that it was not the worst to stay in Nelson. Besides that I can only recommend to do some hiking or better freedom sea kayaking in the Abel Tasman NP. We did the last two years ago. 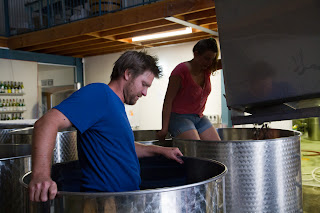 We finally had to leave Nelson. After ten days. All of us where a little bit sad. We went over to Picton / Waikawa Bay towards a huge cottage we booked to celebrate Tobias first birthday the next day - the perfect place for a family (huge living room, balcony, kitchen, lots of rooms and space).  But before that we headed towards Blenheim. One of the most important winery areas of SI. On the bottle this area is called Marlborough.

Three wineries had the pleasure to be visited by us: Wairau (decent), Hans Herzog (of whom we bought a 2003 red CabSauv something – to the date of writing not yet drunk. Modern Swiss origin, highly quality oriented) and Fromm (where the wine did not meet our taste but the traditional preparation of the mash was happening – barefoot kicking of the crapes).

Tobias first birthday was approaching (13th of April). Sure he did not yet realize what happened but his parents prepared a cake with candles (that made him frighten) and some presents including a very typical NZ toy: a Buzzy Bee. A Buzzy Bee is a wooden bee to drag behind, that turns its wings and makes a buzzing sound. He loved it and immediately gave it a good play on the large balcony. An his parents loved that he loved and them loved him because of love. Got it? Besides that he got his first shoes and a book. 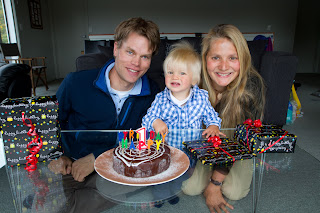 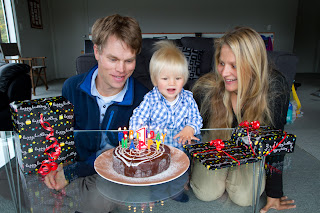 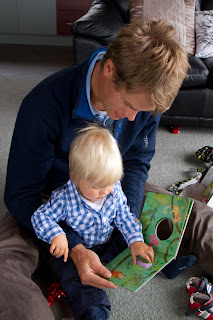 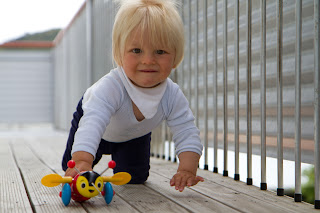 The afternoon I wanted to catch the very last trout of SI. I knew about a creek close to Blenheim in the middle of the wineries. Access with all these creeks in urban area is a little bit limited most of the time. I found some access from a bridge walking upstream. I started as usual, trying to get in the water, I got some water in my waders as this was one of the creeks that was bathtub shaped, thus 1,5meters in depth right next to the bank. Walking the creek upstream through the vine and the apple trees I spotted a view fish in that typical weedy spring creek. If memory does not cheat I most likely caught the last fish of SI in that creek. A rainbow around 2-3lbs. nothing of particular interest – just the last fish on SI (But as usual there are supposed to be much bigger fish in that creek - typical for spring creeks - the large trouts only come out to feed late or early). That is what fascinates me about guides memorizing fish, fly and circumstances. As stated I have problems to memorize the fish caught one day ago. On the way back I could not resist to pick up an apple from the ground. It tasted very sweet and juicy, I had to get two more for Ines and Tobias. All three from the ground, thus windfall. 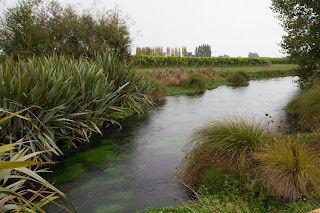 Ines and Tobias in the meantime went to the Blenheim swimming pool. Where they got free entrance as it was Tobias birthday – thank you Blenheim!

Our time on the South Island of New Zealand was coming to an end. The next day we would have to leave the South Island to go over to the North Island (NI). I was afraid of that plan and was not promoting it. Let’s see what NI has to offer? 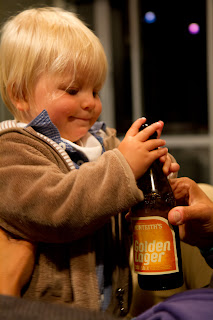 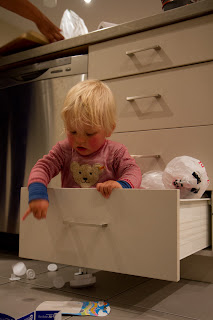 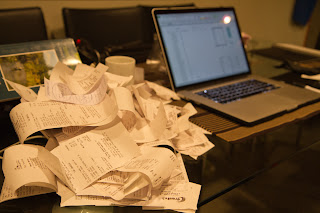 PS: at the time of writing we/I have the second bottle on this trip of Wild Earth Pinot Noir 2009 - by far the best and most interesting Pinot we had - it was accompanied by plenty of lamb chops this night on Coromandl... the last lamb chops of this trip : (