Back to the bush and the fish – Part II


No fire alarm this night. Just solid sleep. (See the post before on Reefton on the fire brigade building opposite the cottage)

For the next two days I had some alternatives to choose: either an overnighter again but in a hut or some smaller creeks not too far away day by day. I went for the first option. In love of the bush, the sandflies and the nice DOC huts. The access would be a mixture of rough 4WD track and some tramping. I started rather late, paid the fly shop lady a visit and headed off. Target was a river fished some weeks before but this time further up. Pretty much where I ended fishing back than I did start now. The drive and especially a couple of sections gave me some doubts but the car performed flawlessly. Especially one section trough the bush which was a detour around a no more existing section of the old track. The last January floods took it away. Parking, getting the pack ready and fishing the same way upriver as usual with a big pack: fish the pools without it and later on pick it. The river was low and clear, some fish spotted. Rather few, but I did not expect many fish up there, due to the experience some weeks ago and the low flow rates. At the moment of writing I can’t remember what I caught this afternoon, most likely if I dig in the memory I had two nice browns of something around +5lbs in the net. I jumped one k of river as it showed some unpleasant structure due to mining on a slope close by to fish just the last stretch up to the hut. Reaching the supposed location of the hut it was rather dark, wondering where the hut should be, but I was lucky as it just happened that I found the steep bank access to the hut above the river. I should have unpacked the head lamp right away.

Lightning the fire in the chimney, having a look on the bookshelf, I found some nice evening lecture and even some up to date newspaper. Now I was informed on NZ SI issues of importance. The hut was warm and in the dim lite of the fire and the candles it looked quiet cozy. Burning quiet a lot of fire wood that evening. I would have to take care of that and replenish it the next day. Butter chicken second round this week, a beer and after some meditation by starring in the flames the call of the mattress. In the hut book I read something about rats, so I tried to close all obvious entrance holes. But still later that night the ‘trip trap’ of the small mammals started and once I had the feeling as some was very close to my head. It took some while to find sleep.

In some of these DOC huts you find strange things. Some find old fly fishing diaries of Scandinavian authors, I found a watercolor paint box – a high contrast of color to the dirty grey of the hut interior. What these colors might have painted? 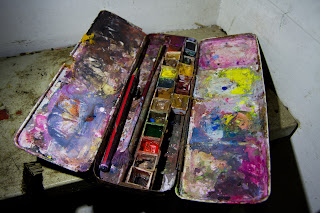 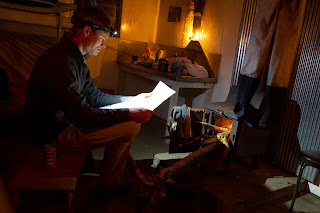 Getting ready for the next day. Fishing up a tributary that was said to have very few fish three weeks ago (somebody was walking (fishing?) it for eight hours and only saw three fish), thus I was curious and had rather limited expectations. But just after a dozen meters I spotted the first trout in a nice pool. It was patrolling its pool and got suspicious, so my chances where fading. After a while the fish gave me a clear sign as it swam very close to me, stood there for a minute and then swam back to feed but much more cautiously than before. I did not succeed and left for the next one. The order of appearance of the following trout might be mixed up but surprising things happened. Pretty much in every decent pool – not in all – was a nice brown of something between 4 and 7 lbs. In the meantime I discovered what they were feeding on: brown, gold flash enhanced, black beat head nymphs size 12 – pretty junky flies. These flies imitated the emerging may flies very well. I got a hook up on a fish that immediately went for a rock crack, I managed to pull it out just to have the trout in there again. Rood bent in half circle, I pulled the brown out again and it went downstream to a stick, I avoided  making a loop around the stick but it went under a shelf with a sharp edge and just seconds later that was it. Leader was snapped. Neither fluor nor anything else reasonable would have avoided that. It was fair the way it went and I was happy that it was a barbless fly, thus the fish might lose it pretty soon. 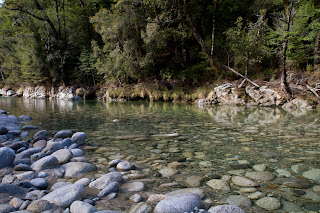 The next fish was an interesting take of opportunism, as the trout was pretty much following an other fish to push it out of its territory and it still took my nymph placed ahead. Before that I was trying to catch one of the trout participating later in these territorial disputes. This fish fought again very vigorous and enduring, trying to reach an unclear base of a big rock wall where I did not want to have it at all price. The price was high as after making maximum pressure with a pretty much closed reel drag the fly came out. The river and the nature became witness of a very Bavarian swearing. I was really pissed to lose that fish. Seconds later I was again laughing about the situation and my outburst of discontent. Another – the third fish of the day – was lost in a less memorable situation.

This river was fun, interesting structure, low clear water, nice trout now and then, I knew pretty much how to catch them and the fish were way strong. Only bad thing, up to now not a single fish came to the net. But things turned to the good and the next fish was landed: a nice brown of 7lbs. During the fight it dragged me up through the rapid well into the next pool upstream. I landed it around 50 meters upstream from where I hooked it. Tough fish! 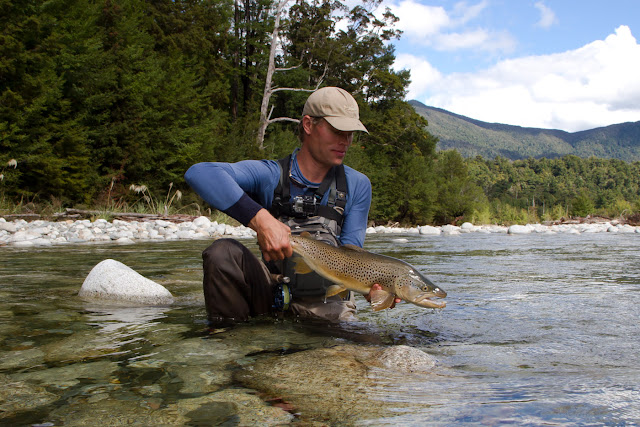 This first fish needed a sister, it took again a while to find a feeding and open minded fish. I was not in the mood to change fly all the time as the fish were taking the described fly, but some got suspicious too quickly. There are two ways to fish in such situations: with a high amount of perseverance, frequent fly-changes and giving fish a rest in case they tend to get spooked or to give the fish some casts and in case it behaves spooky or starts to stop feeding just to head on, as the next fish is just a few steps away. The last approach is based on two preconditions: there are basically fish and you are able to spot them constantly. But walking upstream pool by pool is like constantly unpacking presents, as every pool is like a gift and a box of surprise. On the downside you might cover more ground and thus have to walk back longer in the evening. But as long as I have a fishing rod in my hand I don’t mind walking (translated: I don’t like walking without a rod or a bike on the back). 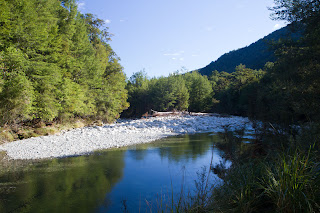 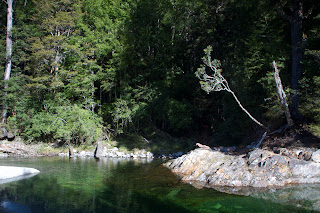 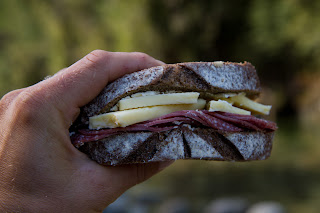 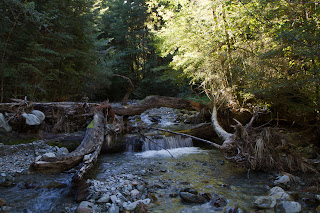 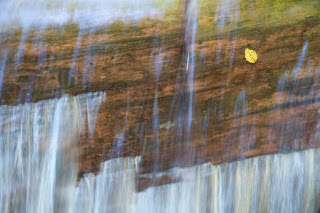 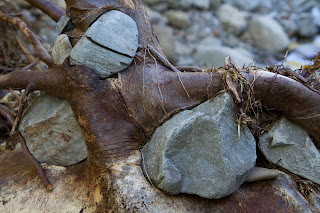 Back to the second fish. The sun was already low, I reached a pool that only gave a partial view under its surface due to heavy glare. But it was enough to see a cruising trout. I was pretty close, in such situations freezing is the best way to react and then slowly on the knees, observing the fish (as long as it is visible), considering the cast, adjusting the depth of the ‘custom fence picked merino wool’ strike indicator and finally a short cast in the direction I guessed the fish might be heading in the glary part of the pool. I only could see the indicator in the mirror like water and it moved! Strike, fish and battle on! Again a brown in best condition, strong and vigorous fighting. It had the same behavior of swimming upstream against a tight set reel drag. The fish swam out of its pool upstream trough the riffle, I had to follow and by this I did not realize a steep step on the pool inflow – I stumbled and took a short dip – (oh no! Wet again what it this case meant wet for at least two hours of walk to the car…) – fish was still on. The tug continued further upstream. I walked the fish upstream like a dog to finally land it successfully. A look on the scale surprised me it had ‘just’ 5 3/5 lbs. It was the last fish of the day as I had to turn around to rush back to the hut, pack the gear and continue to the car to drive back to Reefton. 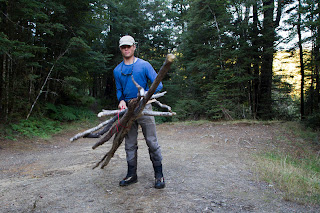 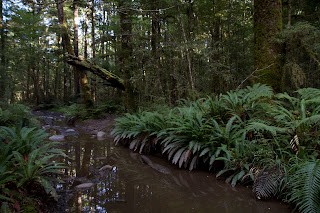 Part of the way to the hut was via a marked track. There were some obvious mountain bike tracks – an unpleasant experience for this brave biker, as he must have carried his bike 50% and pushed it another 30% of the stretch. Arriving on the hut I had to pay my firewood-bill. Thus collecting a whole bunch of good sized drift wood, wrapping it with one of my cords and carrying it up to the hut. More than I burned the night before. Packing, giving the hut a good sweep and leaving the rat-Hilton. Pack on the back and out. The track was rough and only suitable of hardcore ATV-freaks. After a while I reached sections where the track did not exist at all or was now a branch of the river itself. The detour was via the big granite boulders of the riverbed. Briefly after that section that made me wonder how to navigate it with an ATV I saw a tent at the track and right in that moment the owner. It was a hunter waiting for the big stag to show. We had a nice conversation for a while. It turned out he was Danish and had taken three month off for hunting in NZ. The roar was just about to start as the nights were not yet frosty.

After another kilometer I reached the car. Finally I could get rid of the drowned waders from the last fish and put on dry clothes. Now just the 4WD track separated me from Reefton. I managed that well and even the tight detour section through the trees without damage. In an open section of the track I got out to have a fascinated look on the thousands of stars and the milky way in that clear night. No light pollution at all. Unfortunately the Canon only took the noise reduction picture while a considerable falling star made its way over the firmament just below Orion.

Reaching Reefton – it was pitch dark and around 8 pm I headed straight to a restaurant to get something to eat. I took a little bit of friendly persuasion to make the lady to still serve me. But I go my dinner and a couple of beers.

Back in the cottage, shower and relax.

Next morning I packed and went back to Ines and Tobias in Nelson. It was good to drive that way not tired at night time but well rested in the morning.

I was already looking forward to come back to the Reefton area to fish.


PS: If you like what you read here, if you like the subtle hints and jokes share this blog with others. This blog just had its 7.000 visitor since its birthday just four month ago. 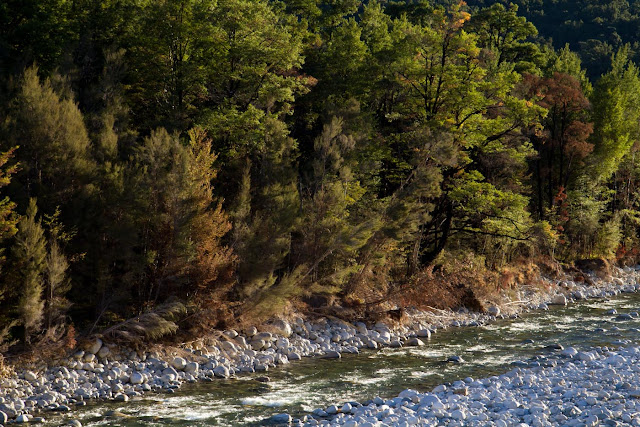 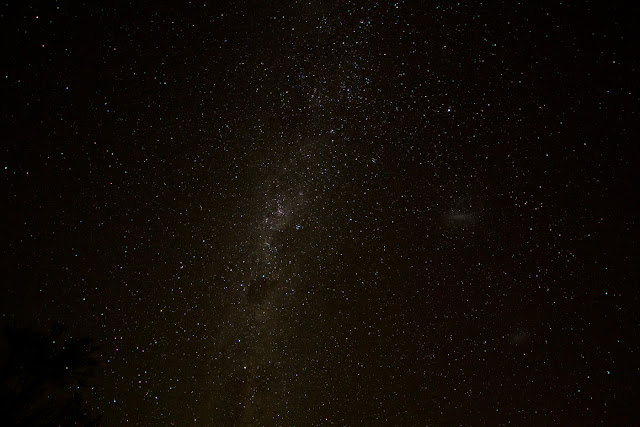