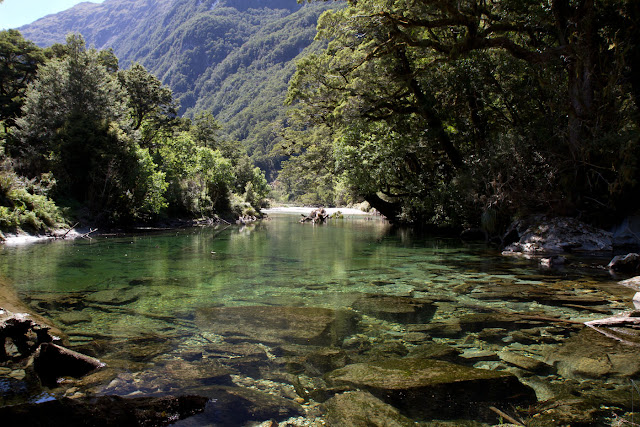 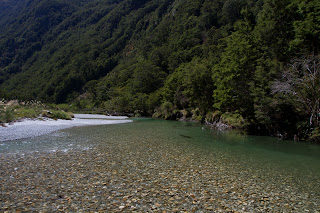 The next day was turn of the tributary. Shortly after the camp it has a gorgey section than can be circumnavigated by following the track on its true right side. That means, in case you find the track and don’t lose it too often. Which is quiet impossible if you are there for the first time and don’t know the track as most of the markings can only be seen from the other direction and the track by itself is most of the time absolutely not obvious. That is tramping about. 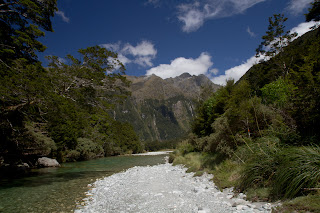 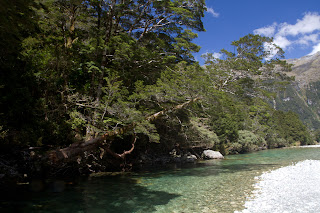 After the gorge there should be a pool with big big trout. But before that there was sweat and severe bush bashing. Coming out of the bush after the gorge the river flows through a lovely valley with low gradient. The pool is right on the end or start, however you wana term it, of the valley. And the pool is like an aquarium in which the huge fish chase the big fish of around 5lbs. The big ones looked dwarfed. The huge ones must have been considerably more than 10lbs - all of them Rainbows. And on a no-wind bright day with the structure of that pool more or less uncatchable. I was watching and filming them for half an hour. Preparing for a few unsuccessful casts, as the fish were altogether ignoring my flies but chasing each other around.


I headed upstream trough the really nice valley. Just seeing to more fish of which one briefly inhaled my fly but did not stick to it. Unfortunately I had to turn around 2pm, to be leaving the camp around 3pm to be at the hut at 5pm where the boat taxi would arrive at 6pm. Too bad. On the right day with more time this could be fun up there.

The way back went considerably quicker than expected, because as mentioned before, the trap line track was much better visible going downriver than upriver. Still it needed very close attention not to lose it. Turning around to see the track in the other direction without the markings, there were some sections which were absolutely not visible. For the next time, I now have the GPS track.

Oh by the way, the only fish this day where from the camp pool. Or did I get none to the net – cannot remember. At the camp, packing, getting ready for the way out. The track / trap line out has the same structure, better marked on the way out. Some sever detours with danger of losing the track due to fallen trees. But I think I now have in 98% correct in my GPS for the next time. In a forest where you sometimes can only see 10 meters and there are no obvious marks it is good to have this digital line.

Arriving after exactly two hours at the hut, I was happy to end the five hours walking of the day and to get rid of the backpack. Ines did pack everything and swiped the hut, so I was ready after twenty minutes, just about in time for the a head of time arriving boat taxi

Bye bye to the hut, with more good memories and nice fishing. Again we had the luck to fish fresh water and did not get in interference with other fishermen.

The way back went smoothly, some more waves and wind than on the way in. Ines picked me from the boat ramp at around 7pm and we headed towards the Motel she had found a room the day before. Coincidentally exact that Motel I spend a night two years before. Everything else in Te Anau was pretty much booked, prices where high.

The day before the plan for Ines and Tobias with the boat taxi went pretty smooth. Except that the Milford Track boat taxi is not used to transport guests by short notice that do not have a ticket. But they nevertheless took care of Ines and Tobias. And the captain did this in a special way, looking like a real pirate, Tobias was so afraid of him, that he started to cry seeing him. Very unusual for him as he is always excited seeing new people. Reunited we spend another night in the Motel. A Motel Ines fixed for the two nights at some kind of “last minute Te Anau is booked price”. Traveler’s advice: Te Anau can get busy and prices change by demand. 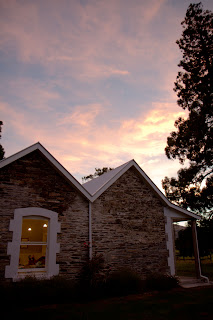 The idea for the next days, was not yet determined as the weather looked unclear and some rain was likely. For the next day nevertheless the idea was to relocate to a shearer’s quarter 15minutes outside of town that I found in the net (accommodation for sheep-coiffeurs). But we were unable to get in touch with the lady in charge. Too sad as it seemed to be available for the days we planned. Hanging undecided around in Te Anau. Doing some internet/Café-stuff, groceries we did not know what was going on. At the afternoon we gave Karen and Rob a knock, as announced. We had a nice Saturday afternoon with them at their second-home in Te Anau. Fishtalk. Did you fish that? How is access there? How was this stream? Tea. Fly swap. Tobias playing with the toys of the grandchildren. A real nice afternoon!

Still not knowing how to continue, we drove to the station to find it deserted. The shearer’s accommodation had the nice typical stile of the 50ies of the last century. After considering plans and weather (rain for Fjordland) we decided to go back towards QT / Garston and called Naylor House close to Garston (see post before on this fabulous vacation home near Garston!). And it was available again – lucky 3F! Within in shorter than usual time for that stretch, we were again close to Garston in the Naylor House – welcome home! Fishing the Mataura the next day was not a too bad option.

This night we had our traditional dish again: beef filet. But this time in a special form as at the supermarket in Te Anau, the ready cut filet steaks were pretty much sold, but there were whole filets still available. For a price per kg we are normally used to pay for good diced meat at home. But one filet pretty much meant either inviting people from the street or having beef filet three days in a row. We went for the last option. Starting with steaks for the first two days and a very special dish for the third day I will mention later.

Doctor’s advice: do not eat so much meat, it is not good for you and not good on the environment (but it tastes good)!

Plan for the next day (Sunday) was to fish Mataura River on an access close by. Wondering, if we would have the stretch of the river for ourselves, or if a coach full of fishing tourists would be on the water before us.