QT, rain, meeting friends or the change of a green to a blue shirt 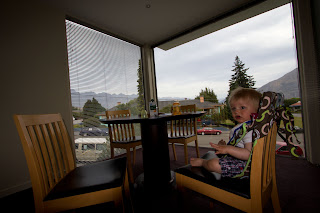 We are still in that hut of the post before and I am still on the same red as it is the same night.

Arrival in QT (Queenstown) coming from Glenorchy. We got a room in the Scenic Hotel in which you could really hear the air con, thus we friendly complained and after a while we got a upgrade to one of the suites with full sized kitchen two rooms and view on the Remarkables. Lucky! Cool, as I even thought about booking this kind of room / suite. QT meant for us some kind of program: The first night at one of the best restaurants of NZ. The Gantleys. We booked a table and got one for the same evening. Wondering but exactly that week seemed to be some kind of slow shoulder season. 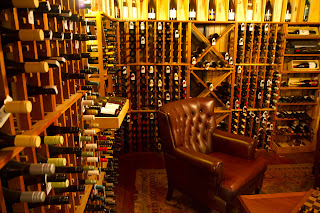 At the Gantleys we went for the six course degustation menu with a bottle of my absolute favorite NZ reds: Pegasus Bay Merlot/Cabernet. This gets 4,5 of 5 flies. The menu was good, but I was not over excited, the two entrees were really good but a little too skinny, the bread was a joke the 3g of butter should have been interesting spreads instead, the main of duck was ok, the second main (rack of lamb) of the same kind. Sorry, but mine rack the night before was on par or even better. But nevertheless the Gantleys is a recommendation (and this is not self-serving bias, the value for money is good, do not miss it and evening at the Gantleys is a must and very decent way to spend an evening! I get back to this on a later blog post). We had two friendly young nice ladies taking care of us that evening at the restaurant. Lauren and Jessica. Lauren could even remember us from three years ago! 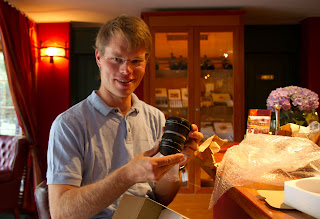 One good and one sad thing about that evening. First I received my fresh 10-22 Canon lens. That made me really happy. All worked out flawlessly and at a really good price. And second. The beloved cat of the restaurant, which even became part of our annual calendar for friends and family, was killed by one of the cars on the road nearby. Fingers crossed for our two beloved cats at home Pinja and Livi. Take care, we love and miss you! You two listen, please be all right when we come back! 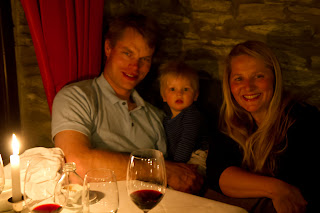 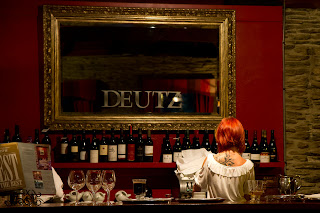 We had a real good evening at the restaurant. Tobias did sleep the first hour and then was very cooperative and lovely later on during the progress of the dinner.

(I did not yet write about fishing, but I am sitting in a hut in Fjordland - Ines and Tobias sleeping since an hour - where there was a roll of toilet paper two years ago that had printed the label 'Livi' on it!)
The bottle of Pinot gave its last drop to my glass, fuel is going to an end. I have to go to bed.

Several days later I try to pick the threat again and continue. We arrived in QT on Saturday, having dinner at the Gantleys. Sunday I thought again of the stream on the north end of the lake, so I went there again – you should really not do that. I got up pretty early, having a quick brekki. As the streets were empty it just took me 40 minutes from door to the stream. Walking down the stream to fish it back up, changing sites, falling in swamp holes, getting a sever electric-massage by one of these electric fences (they are much stronger charged than in Europe, around 3.000 V here), but finally managed to catch a decent Bow on a dark self-tied size 14 nymph. 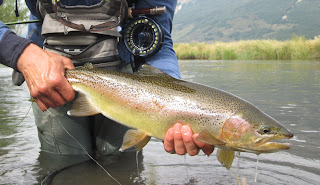 I was back in QT around late noon. We went to the usual QT procedure: Outdoorsport-shops to shop for things you urgently need or do not need at all. Best example: a large Diamond Back camp light. Icebreaker stuff. But this time we really limited our self to only socks and one top. And a nice warm softshell jacket at Kathmandu for Ines as birthday present. But no real fancy stuff like titanium cutlery for camping. Or was it the next day when Ines bought the top? With me as consultant she went to the shop twice more to reconsider the color and finally change it from bright green to a vivid blue. The blue looks and fits better. That evening we went to the VKnow restaurant out of town in Fernhill. A nice place, the locals go there and only some tourists. Unfortunately my Pizza was more on the ‘special’ to poor side, Ines dish with venison was good. I had eaten there better before. The crumble for desert is a must. We saved the extra 40 minutes for that as we were full and Tobias announced his preference to go to the suite again. 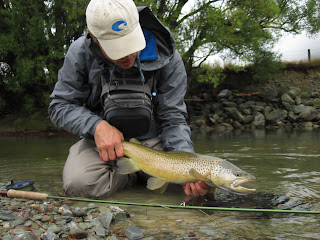 On Monday slight rain was announced and exactly that happened – unusual sight for the last weeks: rain. The idea of the day on my side was to drive down beyond the south end of the lake to fish a spring creek there. But with the slight rain I started to fish Mataura on one of the most visited access points on the upper part, surprised to find fresh water and cooperative fish. Several went for my fly, several spooked or not hooked log enough for the net. Still this bad ratio … The last times I got the strike timing quiet well, this time it is a mystery to me. The rain eased and the clouds became less. Close to ending the day around early afternoon, as the water was starting to get slight murky, I had a look towards the creek I originally intended to fish: two groups of three persons each on 300m of water, one of them was the local guide. The guide with that shop, in which the lady said “never without a guide”. What is the reason of a guide if he brings you to hammered waters? Might be he was not guiding but showing the aquarium of the creek (as I call one specific section there). Nice day in light rain. Back to QT. Monday evening we had a date with friend Bruce Leitch and Chico for a rainy BBQ. He prepared a BBQ beef filet that was definitely five plus out of five stars with a nice sauce and sides prepared by Chico and Bruce. We just had the job to bring some red (Church Road Cab/Merlot and some beer unfortunately the brand Bruce might not like …). It was a very nice evening with friends. Thank you for these hours! Those make a journey like ours outstanding!

Tuesday was the day we figured out to head over to Lake Te Anau to spend a few days at the beloved Fjordland Lodge. No just kidding, as they indicate some kind of dislike for small kids and the current exchange rate make a stay there not suitable for traveling for such a long time. But we stayed there more than a couple of nights. And based on that experience: if you want to afford it, go there. Enjoy the setting, food, view and relax after a good day's fishing. The last time I spend there, it was the end of the vacation two years ago. Just coming back from one of the rivers on the west side of the lake, totally excited, as I had a terrific day fishing there. An American party in the lodge thought I would be the guide for the next day: suntanned and fishy looking. No I was not. And I did not tell them to excited from the days I just had. Nevertheless of the four days there, two were pretty much non fish days due to flood. That is Fjordland - terrific or horrible.

Exactly that river was the place to go on Tuesday. The days before we made arrangements with a boat Taxi we knew that would bring us over there. Now it was time to get the timing more precise “afternoon”. We still had to do some communication, shopping for three nights in a hut, one camp-out from the hut and do the packing. Besides that we had to go to the DOC (Department of Conservation) to get our clean gear certificate. This is needed to confirm that everything that gets in contact with the river is clean, dry and free of potential didymo algae parts. This algae is a pest, it spreads from river to river and covers the river bottom with an ugly and aquatic life threatening mass. Actually this algae is quiet common in Europe but does not do any sever harm at home. Several of the NZ Rivers are already infected. To keep the remaining rivers clear it is HIGHLY IMPORTANT to check, clean, dry your gear before changing according rivers (Please refer to the DOC page on that issue! And follow it!). At the boat ramp in Te Anau Downs I wanted to call the boat man to make appointment for 5pm – no cell connection. Back in the car, up around the next corner. Nothing. No. There is a simple lodge close by so I used their landline.
An hour later we were finally in the boat. Pretty much with all what we had except two boxes, the large tent and the table. Pretty much close to anything else went with us. The boat did not drown and went over the lake. Tobias was wrapped in a live belt that was for adults. It looked so funny. And he felt strange as he was pretty much tied up, unable to move. But the motor made him fall asleep after ten minutes. It felt really good to go back over the lake to that specific river!

We did arrive at the hut and as it seemed, we would be the only guests at least for the night! And the weather was supposed to be good and the river in perfect condition. Cool! It could not get better. 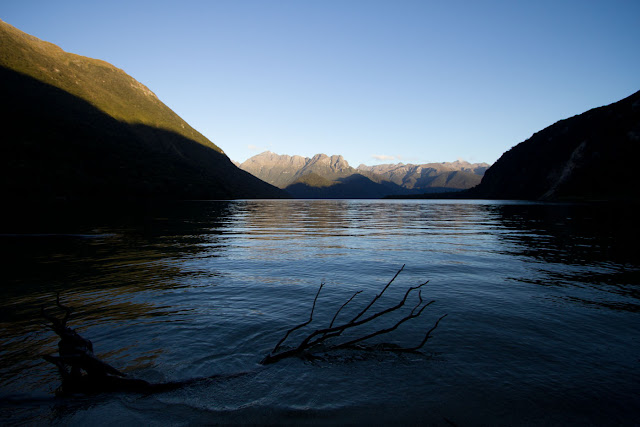