Wow we are there again in the hut at the mouth of a river I had one of my best fishing days two years ago. Happy! Sitting here with the iPad and a bottle of Pinot after a not so good dinner (yes this happens - but that is not related to the hut but to my bad selection of the cut). But that is presence and we going to look back in time to our arrival in Glenorchy. Driving up the shore of lake Wakatipu towards Glenorchy we had a wonderful light of early evening. Rushing the winding, sometimes narrow road, taking some pictures in the strong evening wind and arriving at the already mentioned cottage in Glenorchy. 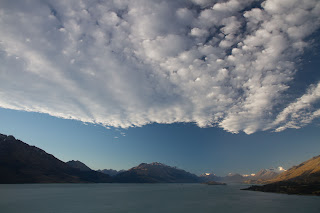 That was just perfect and as expected absolutely ok that it was not cleaned before - the discount was a fair deal. We put our five boxes and everything else (one food, one kitchen tools - never without own tools, one for each with clothes and the chilly bin or cooler, besides several bags) everything in the cottage and had the usual dinner procedure. Easy this time - with a full sized kitchen and a nice table. 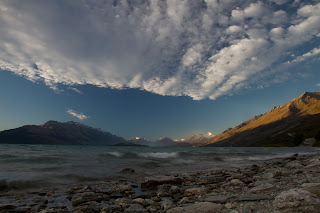 In that cottage Tobias again proved: RV / Motor-homes give the kid a secure environment it gets used to. But, kids want to discover, thus an RV is boring after a few days. He has so much fun, when we pitch the tent, he loves to crawl around in and out and our fixed roof accommodations are always a new environment to discover for him. Adventures! If you are not afraid of 30-60 minutes extra packing and set up time per day, go for the camping / holiday home option. Especially if you want to leave the beaten path and drive some back country roads without the dishes falling out of the cupboard (we know what we are talking about after a total of 10 month in motor-homes in northern America). And compared to the U S and A and Canada most of the campgrounds here in NZ are kind of disappointing. You criticize them a lot, but their National Park and National Forest system and camp grounds are top of the line! 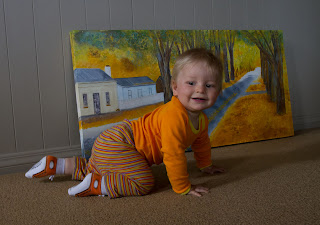 We slept quiet well; the wind was blowing and stirring sand and dust from the riverbed of the river Dart some more hours. Actually this was the first night where Tobias got real beaten up by the sandflies - nota bene - not camping but indoors. The next morning he looked a little bit tortured. But up to now he took it really cool.

Besides that, one day at the cottage Tobias wore exactly the same colors as one of the paintings in the cottage - look at the picture - isn't that amazing?

Glenorchy is close to Paradise - in a geographic sense, as not far there is the region called Paradise.  Glenorchy by itself consists of a boat ramp where these roaring loud jet boats start to race the Dart river, an old campground, several Cafes and bars that are open only for the season, a very basic shop to buy food for a premium, a gas station that closes at 5pm and several houses of which most seem to be holiday homes that are rented to tourists that do not book Blanket Bay, thus most of the tourists. 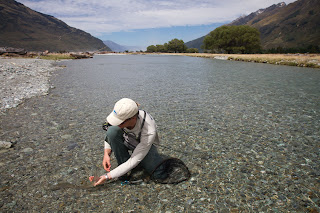 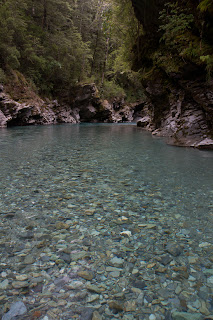 What else about Glenorchy. Oh yes the water. Routeburn River we gave a try together, walking down from the first swing bridge to the mouth and fishing back up. There again we meat a friendly Australian Fishermen that we already meat around Garston at the Mataura. He came over to NZ for a week to fish around QT. The water was gin clear, I caught a smallish 3lbs something Bow on Royal Wulff that I saw before in a tiny swirl. We saw some more but all of them where very spooky. Especially in total three nice ones upstream from the swing bridge. Definitely on the right day one or the other fish would take the fly, but not on that day we were there. I mentioned that river here because: 1. the Routeburn is well known. 2. Thus it gets pretty hammered 3. It is nice, but do expect nothing. 4. I most likely would not go there again. Unfortunately the fish were far too spooky to hand the rod over to Ines. 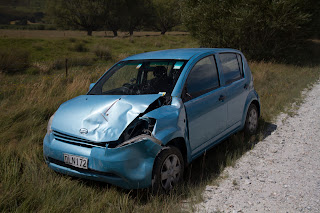 The next day I wanted to fish a creek close by that tends to be silty after strong winds. And exactly that was the case. Again Ines could not get a chance, so we just had a walk on the river. There was only one 'funny' distraction from the silty stream: a small car that was driving WAY to fast (around 120km/h?) on a road that - if you go it straight and do not turn - turns gravel suddenly. We both just saw a cloud of dust, a bang and a still not slowing car. Not before 200m it slowed and came to a stop. It was obvious this car did hit something and left the gravel road due to loose of control. Several cars did stop and took care of. Later - after ending the walk on that silty water -we observed the beaten up small rental car. One side and the front were really beaten up. It must have left the gravel towards left side, went through a fence, after 20meters back through the same fence and on the road again, losing its front bumper and coming to a stop 50 meters later. The driver must have been totally mad or sleepy or just ignorant. As there was no face-mark in the windscreen and no blood on the dashboard the two passengers must have been very lucky. If there would have been a pole or a significant tree in their way, they would have been in Paradise. And not the one close by on the real world. In fact they were going exactly towards Paradise. Might be they took it to serious. 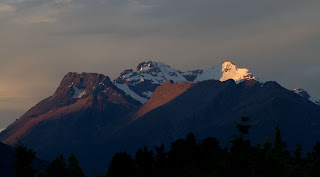 When we are on the road we see crashes. Back in 2001 in the U S and A we saw a helicopter coming down, all survived pretty ok. 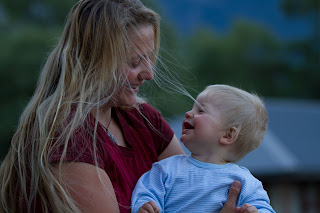 The bail out in terms of fish was a stream I found on the map and observation. Arriving there, there was already a guide with his client. Bad, because we could not go there. Good because it confirmed my discovery.

I was chatting with the guide for a while and we exchanged contacts. Gordy from Glenorchy.
We had an afternoon off, so we drove to Kinloch to have a cafe there, but they had a function thus it was closed to the public. We went back to the cottage.

The next morning I did what you should not do. I was in fish-fever and went straight to that same peace of water. Normally waters here should rest as long as possible. Saw several nice ones, hooked and lost one. Can't remember if more went for my fly. Might be I try to forget my bad landing ratio. I was a little late and by late morning I could observe the fish slowly vanishing and hiding in the weeds of that stream. This afternoon we meat Gordy for a cafe at the Café in the village that the day before did manage to take 20 minutes to serve a cappuccino. We fish-talked for a while and made plans for possible ideas about fishing Fjordland.

Thus I quietly quit quiet early and went back to the bach (“A bach is a small, often very modest holiday home or beach house. Alternatively called a crib in the southern half of the South Island,…” from Wiki) with Ines and Tobias. 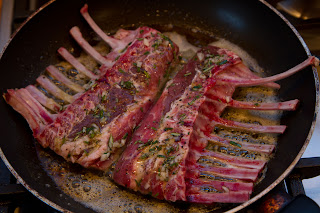 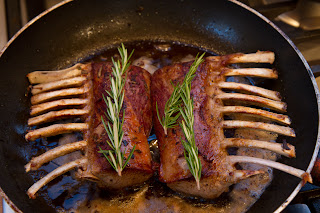 We had the last night in the cottage. Time for some special dish: Rack of Lamb the traditional way, thus the whole side of the rack in the oven with seasoning. But the oven did not work. So the pan was the way to go. The two racks marinated for just an hour with fresh chopped rosemary, garlic, olive oil, salt pepper (just the thyme was not there, but we did not miss it). It came with mashed potatoes with lots of butter, fresh beans and a good bottle of red (mentioned before - cannot remember - oh yes as I took the pictures - it was a Merlot). With a reduction based on butter, Merlot and some special Italian vinegar and some pepper. The result was absolutely first choice. I was really happy how it worked out and tasted made with the special temperature gradient I was controlling.

Saturday, we had to relocate and to leave Glenorchy. Our next destination was QT. Some days before we booked a room at the Scenic Hotel (have been there two or three times before, close to the center, ok, good value). This and the dinner on the evening provided some nice surprises. More to follow. 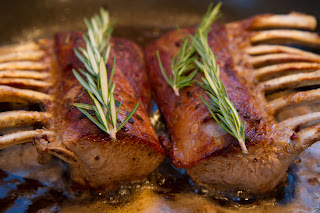 Sorry that this post got longer. But some of you complaint that the "The Fly Fishing" in the title of the blog got described in too much of a detail and the "Family" (btw which is only one of the 3F) comes to short. Thus I changed that. This might also be related to the fact that we really do not give too much about the "tourist attractions" here. Most of them we already did the years before. Sky Diving, Jet Boating, Mountain Biking, Wineries. Now we just live here and drink the wine and enjoy the country. 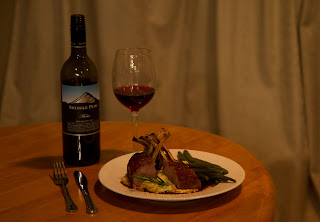 And this blog follows three motivations: diary on fishing without getting to precise on where and what (that is a real challenge - and I should start my top secret transcription of the rivers not mentioned here by name!), information and sharing with NZ travelers with a Fly Fishing Focus (again 3F!) and information of friends and family (oh just 2F...). Just for them are all the pictures without a fish in or out of focus! ; )