Fjordland – good to be back! 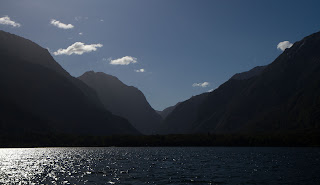 Entering the hut was close to coming home. Two years ago I spend there four lonely days, I just had contact to fish and on the very last day to some staff members of the Glade House at the Milford Track. The wooden cutting plate I donated to the hut two years ago was not there, the outhouse was flooded and the water tank was clogged. Those were the three bad news at the hut.  Everything else was as expected and just good. We had dinner the usual style with good red and a cooking-beer (a tradition dating back to 1998 Sweden). A nice quiet night at the hut, a good sleep with enough space. 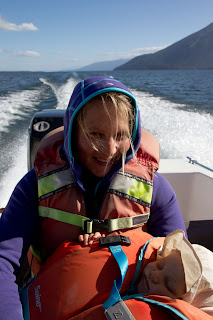 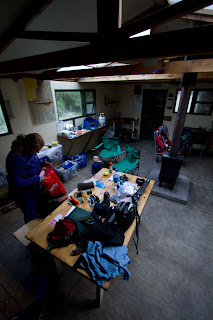 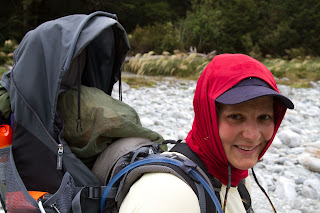 As usual later than anticipated, we headed for the river. The idea was to walk up, following the quiet easy trail for the first 25-30 minutes and then start to fish. We knew the water from before. A medium sized river around 20-40 meters wide and cross able at most of the pools. It had perfect low and thus clear water. It did take a few pools till I got used to the structure, coloration of ground and fish to spot the first fish. And not long after that I caught the first one. Flies of the day were the usual Wulff, Blow, Adams and sparsely tied black and brown nymphs. 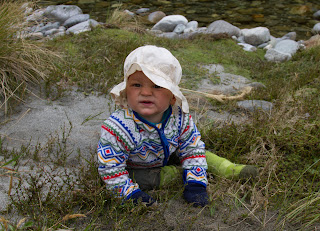 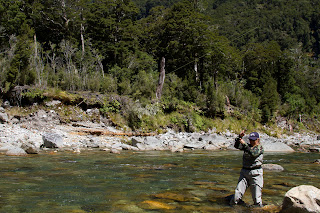 Continuing upstream we came to a good pool from that I got several takes, this pool was already a goldmine two years before. No long casts needed just short precise presentation. Most of them Rainbows around 4-5lbs. We had lunch with gourmet sandwiches and water from the river, on the soft moss and grass on the beach. Sandflies were not too bad as it was sunny warm and with a light breeze. If it is covered, humid and no wind these nasty beasts can be really pain in the ass. Tobias was pretty cool, playing around with sticks, stones or sand or sleeping. The sandflies did not bother him to much.

Ines took the rod and I Tobias on the back to guide her. It did not take long till she hooked a decent Rainbow of close to 4lbs that came to the net. Efficient fishing – much better than my efforts. Still this was a very good fishing day with something around eight fish to the net around 3-5+lbs, as always I am bad on counting and bad on taking care of the precise weight. All beautiful fish! 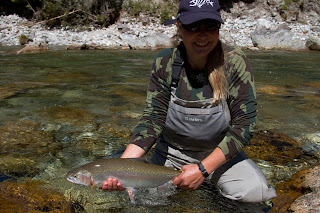 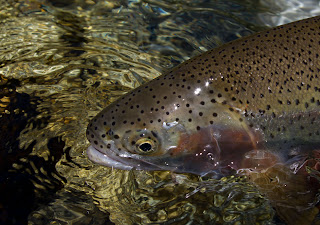 Fishing up till around 6pm ending close to where I turned around two years ago. We walked down the riverbed to hit the marked trail a few hundred meters later. Up here the marks and the visibility of the track was much lower than down at the hut. Without local knowledge and the GPS this could end up in sever ‘lost in bush bashing’. Hard steps with a singing and mourning Tobias on my back and after a sweaty hour we were back at the hut. Wading the river the waders was good during the day, now they were just a steam cooker. When you are in the river up to the waist the whole day you can get really gold right through the bone – then you start missing fish as you hesitate to wade appropriately. I prefer to stay warm and agile and better sweat a little bit at night. And there were no thorns on our way so no danger for the waders. As some bush bashing trough thorns can destroy waders within minutes by dozens to hundreds of small pinholes. 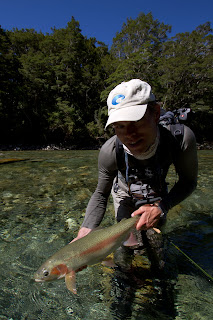 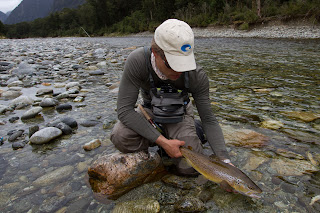 Rushing down to the hut, Ines discovered an other fisherman at the river and a lady following him. It is always not what you want to see on such a river: other fishermen. But this time the story was different. Arriving on the hut I discovered an obviously made to measure 7,2m motor yacht anchored in a small bay close to the hut. A real decent boat that seemed to be built exactly what it was used to: going over the lake to fish the distant rivers and life on the boat during night. Short after we got settled in the hut, the fisherman and the lady showed up introducing them as Rob and Karen, the owners of the boat. We invited them to come over for a glass after dinner. 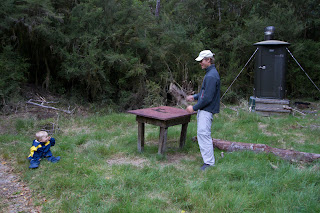 A while later we set up for dinner: lamp steaks with rice and salad. Right at that moment our new friends showed up. In contrast to the night before this night we had lightened the stove / fire of the hut to keep it warm and cozy. We four (Tobias was a sleep) set around the fire, two eating and four drinking. A talk about fishing and some other minor topics ( ; )  ) evolved and close to midnight our new friends said good bye to leave for their shaking bed on the calm waves of Lake Te Anau. 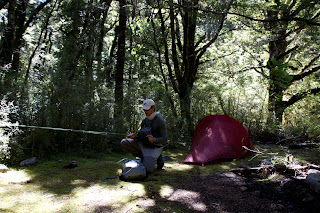 The next morning I planned to spend one night at an out-camp a good two hours up the river to fish the river and another branch. Realizing that, Ines was bored by the thought to spend two days and one night close to the hut till the boat taxi would arrive to go back to Te Anau. So my idea was to ask our new friends to take her to the mouth of the Clinton River (A plan they mentioned before) where an official boat taxi would leave around afternoon, so she could go towards Te Anau one night earlier. The next morning we arranged for that. Thank you for that! 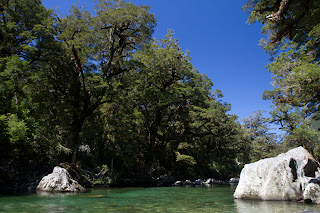 The fisherman Rob and I arranged for the supposed water to be fished by each, so the two of us would have fresh water.  As usual I left the hut later than anticipated, loaded with the pack for a camp-out, food, tent, cooking stuff, fishing gear – totaling to something around 18kg - and ready for the two hours tramping and bush bashing up the river to the camp site. I only lost the track a couple of times. To explain that: there are sections of the track where there are no visible markings, fallen trees blocking the track or the track totally overgrown by fern, so that the track can only be felt by the hardness of the ground. After around two hours I arrived at the camp and was surprised: a cool camp spot and a pool full of fish right on its side. I pitched the tent and prepared to fish the main river upwards from around 1pm. 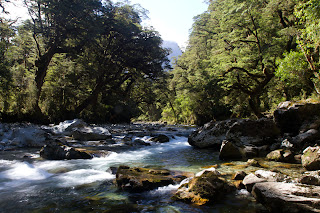 After a few hook ups and lost fish and some to the net at the camp-pool, I headed up the main river. Fishing and fish deteriorated, caught only the one or other one in likely looking water. All of them Bows around 4-5lbs. A beautiful river, but the best stretch is definitely below. Turning back around 6pm finding the track on the true left bank and losing it sometimes I arrived at the camp after an hour. 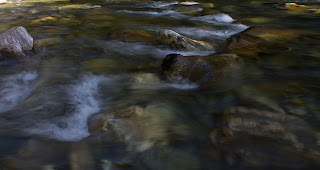 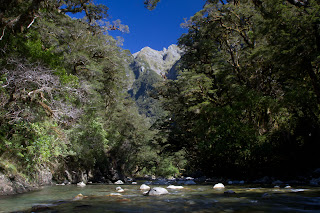 Dinner was 250g rice with butter chicken, no alcohol, just river water and coffee – after that I was stuffed. A Weka (chicken sized ground borne bird) was hanging around the camp, we were good friends till the point where the bird tried to steal my dinner. To keep the increasing sandflies at an arm’s length I lightened a fire in the ring of stones (that was totally cleaned due to the floods some weeks ago!) and smoked myself. Literally sitting in the smoke – but it worked out. To some extend I was missing Ines and Tobias and wondering if the plan with the boat taxi worked out and where they would spend the night. The night I slept badly due to a too short tent, cold climate and not really being tired. The tramping of four hours was just not sufficient and exhaustive enough and the the fights with the fish to few. ; ) Might be, the next day would provide some more exercise.

What did Ines and Tobias do? Did the plan with the boat taxi work out? Did I catch the 20lbs fish in the famous pool of the tributary? To be continued. 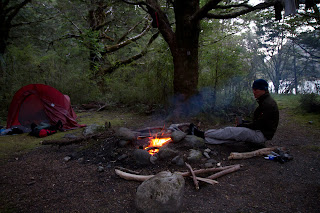 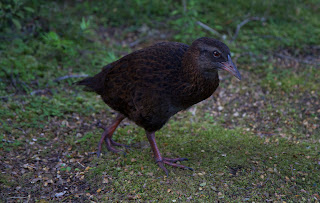 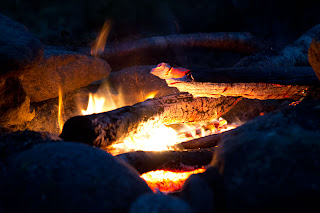