The Stream of Dreams that got infected 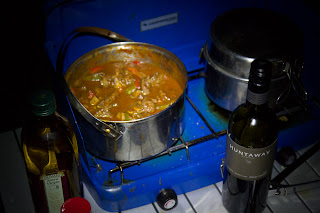 Arriving around dawn on the stream of dreams, finding a camp a few miles from the paved road, setting up camp. It was the evening of the third beef filet course. This time we had to take care of the tail end. After two days cut in slices, I cut it in now in one inch pieces and setup a simple goulash with onions, paprika, diced tomatoes, mushrooms, separately fried beef added later, Huntaway red and heat for not even an hour plus real rice. Wow that was good even at 10:30pm – might be, due to the circumstances, the fine and soft texture of the meat without cooking it for hours, one of the best goulashes’ I had up to date. 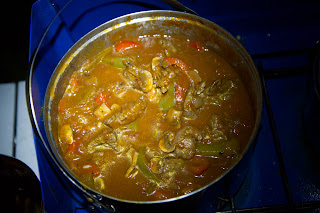 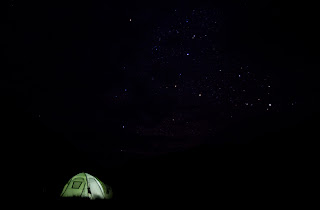 The night was cold with some clouds and stars. We started fishing – after placing Tobias in the car seat – right from the camp, so we repacked and started without moving the car. At the river, the first impression was disappointing, as this once pristine river (we fished it three years ago and took great care to enter it with clean gear) was infected more or less severe by didymo. Nevertheless, the water was low, clear, cold – just perfect. Typical dry Otago landscape, far from any civilization except the few fencelines on the hills around us.

It was good to be here again. Three years ago we fished that river with Bruce as a guide and Chico (friend of Bruce) as the driver of the 4WD, thus there was no need to walk back at night. We had a nice camp-dinner together (the legendary lamb chops), tried to toss some mouse streamers at pitch dark more or less drunk (at least I was) and crawled over exposed cliffs (at least at night they were). 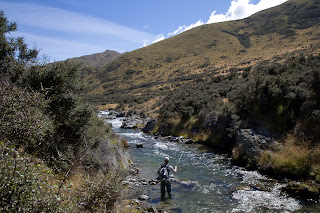 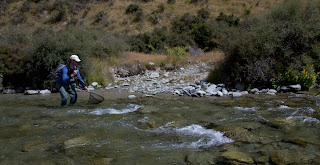 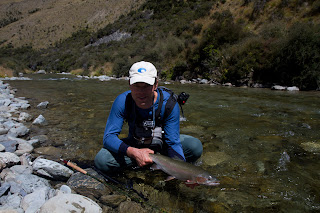 This morning we followed the water upstream, in a known pool I spooked the first good sized fish after a few casts. It took some time till I got a chance for a fish to the net. Most of them nice Rainbows around 4lbs. There was one fish that took my fly and immediately was on full speed up the large pool only 5meters of my flyline on the reel were left, I was already expecting to hear the backing knot going through the rodrings (a familiar sound for every saltwater fly fisher), but I could stop and turn the trout. Over the course of the day I caught my fair share of fish, lost some, most caught on dries such as Cicada, Blow or Royal Wulff. We had lunch in the sun that came out after an overcast morning. Ines tried a few casts on some promising pools but nobody was at home. I fished a little longer than Ines and Tobias followed, they turned around late afternoon. The way back of an hour was boring and inevitable as no bike was on hand. 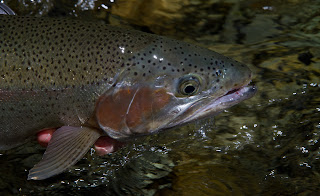 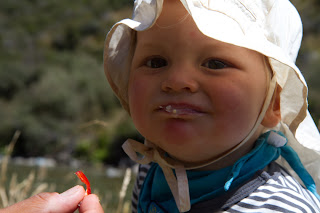 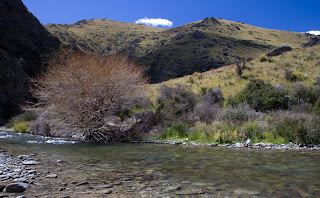 Next day we addressed the part upstream from the last days end. We drove the 4WD-track up the valley some more or less easy stream crossings. The day went much slower than the first. I could very well understand that Ines was board by this day compared to the more active day before. Thanks to her patience!

Hard efforts to get two fish to the net. I found only few fish and several good pools where without any movement. Point of return was the same spot we turned three years ago. A good pool where one fish gave me even two chances but I could not score. Overall I had severe problems to get the hook set with these big cicada patterns right – either too late or to early and some fish seemed to even do some magic tricks to avoid the hook. Besides my disability, the impression remained that there were even fewer fish than before, this might have been caused by didymo.

We spend another night at the camp spot to break camp in the morning. Tobias again had great fun as we packed the tent.

After a traditional stopover in a nearby old Hotel/Bar, we were on the road to a not too far away stream in Otago. But that story will follow later as I still have to do some preparation for a solo-trip in Fjordland... 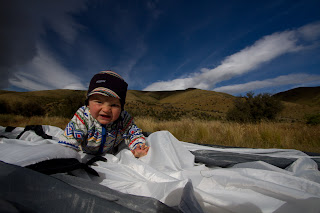 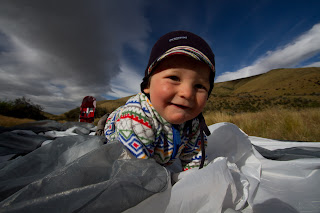 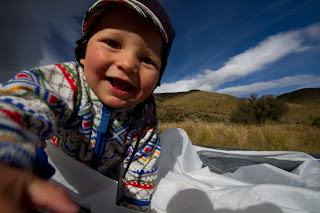 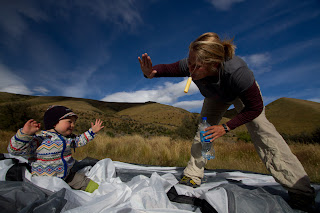